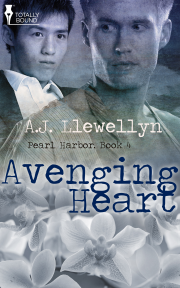 Book 4 in the Pearl Harbor series

World War Two brought them together…but a family's threat to take away Tinder and Jason's son, Christopher, could tear them apart.

Avenging Heart, follows Jason and Tinder's adventures in Honolulu in 1947.

The war is over, but the islands are slow to heal from the devastating ravages of the attack on Pearl Harbor. Jason and Tinder are part of the rebuilding effort. Tinder's stepmother is spearheading a growing movement of housewives who are keen to help their husbands bring home the bacon—it's a time of remembrance, hard work, fancy clothing, Tupperware and other intriguing new inventions.

Tinder and Jason, the proud parents of their five-year old son, Christopher, are shattered when his birth mother's family challenges their legal adoption of the child. His mother, Melody, a former working prostitute on Hotel Street, had been murdered, her sins long buried…until now.

The surprising discovery of her killer and the couple's desire, both for vengeance and to maintain the loving home Christopher has always known, make for nonstop twists and turns of Tinder's Avenging Heart.

What can I say honestly other then AJ has done it again! Hands down - His Pearl Harbor Series is on my top 5 lists of series I cannot live without. Tinder and Jason suck you in from book one and don't...

I have enjoyed the journey these two men took from the very first time they met back in 1941, feel as if I have stayed with them through all their trials, and am really sad to see them go. Their story...

Share what you thought about Avenging Heart and earn reward points.