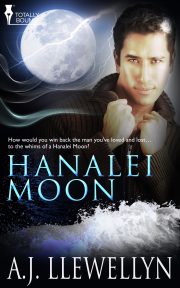 What would you do if you lost twelve years of your life? How could you win back the man you've loved and lost…to the whims of a Hanalei Moon?

World champion surfer Gaby Loe wants to take advantage of a rare tropical storm to train for his upcoming world title contest. His lover, Ntino, is furious because it's the day of his sister's wedding. Gaby insists he'll make it back in time and heads to Hanalei Bay.

He wipes out badly in a gigantic wave. Fighting for his life, he almost drowns. When he makes it back to shore, he finds his beloved dog Ginger, his car keys, and his vintage Woody have all vanished.

He's about to discover that's the least of his problems. Somehow, someway, he's also lost twelve years of his life. Ntino is now a straight, married man, and Gaby's business partner would prefer him to be dead since he's making a fortune marketing Gaby's untimely death. Can Gaby win back the love he desires? And what on earth happened to him under that Hanalei Moon?

Publisher's Note: This book was previously released at another publisher. It has been revised and re-edited for release by Totally Bound Publishing.

Sunset had not yet come to Hanalei Bay and I resisted looking back over my shoulder at the beckoning red-gold hues of the last, vibrant rays kissing the ocean. This was the most magnificent place on earth. Hanalei Bay managed to pack a lot of beauty into a tiny parcel of land. Pristine beaches, cascading waterfalls from the emerald green mountains fringing our side of the islands and, dammit, the best sunsets in the world… And I have seen a lot of sunsets, being a professional surfer.

I hesitated outside the house. I could tell the ceremony had already begun, judging by the incessant chanting coming from inside. It was common in Buddhist households to let yourself in during times of prayer but, although I knew the back door was unlocked, I couldn’t do it. Not with Ntino’s family. Not ever.

I sensed a fight with Ntino would come the moment we were alone. I was damned if I went in, damned if I didn’t. Kicking off my shoes outside the house, I made sure they were lined up correctly, toes facing outward to bring money to the dwelling, not send it away. I brushed the salt off my arms, still feeling as if I was in water. I’d had a good day of surfing and sure, I’d lost track of time, but I had a world championship to defend in two days.

Besides…Ntino’s family hated me. Knocking on the weathered wooden screen doorframe, I pasted a pleasant look on my face and forced myself to smile when his mother opened the door.

I tried so hard with Ntino’s family, really I did.

I felt her gaze sweep over my brown skin and my clothes. I was in my Sunday best. Ntino had screamed at me not to wear shorts and now I felt uncomfortably hot in my Dockers and plaid shirt.

Between Nani’s seething anger behind those small, hard-pebble eyes and the warmth of the enclosed kitchen, all in all, I should have settled for being damned for not coming to the Promise Ceremony.

Nani did not approve of our relationship.

Inside the stuffy kitchen, a mountain of food lay in wait on every available surface. She led me into the living room, through the long, long hallway, one finger crooked behind her as if hooking me like a great, giant carp. Or maybe she just thought I’d get lost on the way.

I wanted to scream ‘I’m gay, not stupid’. Not that she really knew I was gay. She only knew her beloved son, Ntino, had done the unthinkable and left home before marriage to move in with me, Gabriel ‘Gaby’ Loe, Hawaiian state surfing champion and, I hoped, soon to be the world champion third year in a row. Officially, Ntino—say Tee-no—and I were roommates, but after two years, I think she’d started to suspect something else was going on. She and her husband, Leng, desperately wanted to get me away from their son.

The sickly-sweet cloud of incense wafted over me as I entered the living room. The massive and ornate butsadan, a three-hundred-year-old Buddhist altar, took up an entire wall and was the family’s pride and joy. All eyes were turned to the gohanzon in the center of it, the long, narrow scroll that contained the prayer of life.

Ntino glanced up at me and lost his rhythm.

One look at him and I was seduced anew. I’d never been with a Laoatian man before. For him, breaking from his tight community and being involved with a Hawaiian man’s family was too much for his own family to handle. Of all the people he could have aligned himself with, I knew this much. Nani disliked the Vietnamese family across the road even more than me and she was grateful he hadn’t moved in there. I didn’t quite understand the long simmering tensions between the Vietnamese and Laotians from the old country, but it was like hanging onto anger toward Japanese people because of Pearl Harbor. It was time to forgive…not that I would say this to Nani.

Share what you thought about Hanalei Moon and earn reward points.