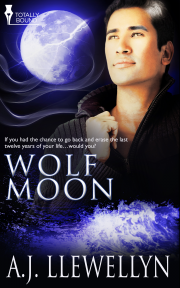 If you had the chance to go back and erase the last twelve years of your life…would you?

World champion surfer Gaby Loe inexplicably lost twelve years of his life when he wiped out in a bad surfing accident. When he came to the surface, he discovered his beloved dog Ginger, his car, his keys and his entire life were gone. Ntino, the man he'd loved had turned on him. Mickey True, his best friend, had stolen his name and was making money based on Gaby's mysterious disappearance. But Gaby has the perfect life now, with Pono, the man he loves, until…

Unbelievably, on Christmas morning, on the day of a wolf moon, when magic is supposed to happen, the two men have a rare fight and Gaby grabs his board and goes surfing. He wipes out again and when he makes it back to shore, Ginger is waiting for him. Somehow, Gaby has gone back in time and it's twelve years ago. Ntino is waiting for him, Mickey is still his friend. Can he—will he—take control of his past to secure the future of his dreams?

Reader Advisory: This book is a sequel to Hanalei Moon and is best read in sequence.

I had a bad dream. It’s a dream I often have, of drowning. I awoke, breaking the surface of sleep, realizing not for the first time that the gray whale had come and saved me, buoying me, bringing me back to reality. I’d heard his call, felt his mana as he left me. A part of me yearned for his sacred voice. A part of me felt blessed relief at being able to breathe again.

I woke up wet, too wet for sweat. I gasped for air and Pono, my beloved Pono, lying beside me, was awake now, reaching for me.

I couldn’t deny it. I glanced down at the sheets, soaking wet. Whenever I had the dream, it was like I’d been swimming.

“Maybe we should go see somebody, baby. You know, maybe…we need…help.”

His voice was gentle, but I knew he was concerned. It was the first time he’d said it. I’m not sure how I would handle a guy who had bad nightmares, who had a whale fungus on his back that came and went. And how would I handle being with a guy who went for a surf one day, wiped out and came back to shore inexplicably discovering he’d lost twelve years of his life?

Pono seemed to deal with it all just fine. Our puppy, Kiki, lay on Pono’s feet, licking her paws. She was the granddaughter of my beloved Ginger who’d gone with me that fateful day, and whom I’d never seen again thanks to that bizarre blast to the future.

I still missed my Ginger, but felt grateful that I had a chance to love Kiki, who looked like her but had a personality all her own.

She gazed up at me, her huge, brown eyes so like Ginger’s yet full of puppy mischief. She yawned, showing me the sweet little killer teeth that mowed through shoes, garden hoses, sofas and my favorite surfboard.

Pono rubbed my back and I wasn’t sure if he was consciously rubbing the spot between my shoulder blades, where the whale fungus appeared. It had started coming back again the past few days after being dormant for months.

We’d been happy together, married in a baci ceremony six months ago and we’d never had a bad argument, never a bad moment until two days before. I fingered the baci bracelet, the piece of cloth that signified our unity. I always checked it was there. Pono wore one too and had gone a step further, tattooing one around his upper arm, my name entwined in it. My man always joked that he wore his heart on his sleeve.

For a moment, I sat there, watching my dog chew my feet through the blankets. I wondered how long it would take her to sink those choppers into actual skin and muscle.

“I know today’s important to you. I was being a brat. I’m sorry.”

He stopped rubbing my back and sat up, putting his arm around me.

“Are you kidding me? I’d forgotten about that already.”

“I know you will,” Pono said, his eyebrow arched. “You are a man of your word.”

That made me laugh. It was Christmas after all, but I’d hoped to spend it alone with him. Selfish, I know, but he’d gone and invited a bunch of people and although I enjoyed all of them, loved them in fact, I’d been in a weird mood. It always happened when I started training for competitive surfing. It put me on edge. I didn’t like being that way with Pono, who was patience and goodness personified. But, after all, it had been his idea that I compete for the first time ever in the annual Gaby Loe Long Board Championship. Named for me after I disappeared, the contest awarded training and sponsorship money to young surfers.

“You should go and have a surf,” Pono said. “That’ll make you feel better.”

“No.” I had a phobia about surfing before any big family event. The last time I did, I was living with my ex Ntino and we were getting ready for his sister’s wedding. I took Ginger to the beach with me and never came home again.

Ginger. She was my only regret. My beautiful, wonderful girl. A lifeguard found her running along the beach and returned her to Ntino, but she never got over losing me. She died of a broken heart, they tell me. Yes, I still love her. I mourn her because although I technically lost twelve years of my life, I really didn’t. For me, It’s been a year since I came out of the ocean a changed man, but I will never get over losing her.

This book is an amazing read. It leads into many things paranormal and has a fantastic pull to it.

Gaby is a world champion surfer who lost twelve years. The boyfriend from...

A very interesting story line. Haven’t read anything like this before at all and actually really enjoyed it. Gaby is a great character and I find myself wanting to pick up Hanalei Moon to see where...

Share what you thought about Wolf Moon and earn reward points.