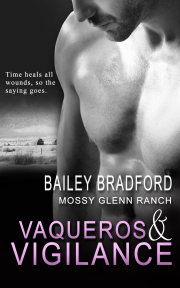 What starts out as a one-night stand ends up changing two men forever.

Joaquin Almodovar has been disowned by his family and shot by a mad man. To say that he’s had a few bad months would be an understatement. When he finds out he can’t be the vaquero he’s always been due to the extent of his injuries, Joaquin is even more lost than ever.

He might be the best-lookin’ man at the Mossy Glenn, according to Hector and the others, but that doesn’t make Joaquin a man at all. Not when he can’t cowboy up like he used to. Learning that there’s more to him than the job he’s always loved isn’t easy, and Joaquin’s not a hundred percent certain he’s up to the task. In fact, he’s lost so much faith in himself that he doesn’t know what or who to believe in anymore.

Time heals all wounds, the saying goes, but it sure doesn’t seem to be doing much to heal Joaquin. It’ll take the help of a man he shouldn’t trust to learn that there’s more to himself than how well he sits a saddle, and how good he is with a rope.

Reader Advisory: This book contains references to domestic abuse and child abuse, and the backstory involves kidnapping and enslavement.

Jail was an experience Sebastian Honeycutt never wanted to repeat. When the iron bars had clanked shut behind him, he’d nearly pissed himself. To describe himself as terrified in that moment would have been an understatement.

All he’d been able to think of was that he was locked up again, a prisoner, unable to escape. Then a second, horrifying realization slammed him—he could have been found by the very man who’d held him prisoner for five years. The man he’d escaped from only to be caught hiding in some dingy shack in Montana.

The man he’d lied about when he’d been interviewed by the local Ashville police.

The man who was a police officer, whose name he’d known despite telling that Officer McCain otherwise. Seb knew how cops worked—a band of brothers and all that, no matter what some of them did.

So he should have been smart enough to avoid jail, the second to last place he ever wanted to be, but no. He’d been picked up for loitering. It was stupid, all of it—him being arrested, and him standing around outside the physical therapy place to begin with.

At least he was out of jail now, though that was little consolation. He’d given his real name when he’d been arrested. Now he could be found, and would be, he was sure of it. He’d have to run and hide again. Seb blinked back tears as Reverend Mary Olinger gave him a kind look.

“Sebastian, you know you can confide in me,” Mary said, not yet starting the van.

Seb swallowed and shook his head. There was nothing to confide. His secrets were his own, and sharing them might endanger others. He had only to think of the man who’d gotten shot because of him to remind himself of that fact.

“You aren’t stupid,” Mary replied in her usual calm, firm tone. “Loitering arrests are generally just an excuse to arrest people some police suspect of being prostitutes, although sometimes it’s also because the loiter-ee appears to be a threat in some way.”

“I’m not a threat and I wasn’t doing that,” Seb protested, turning to look at her. “I wouldn’t!” He’d never had sex, or even been kissed. Selling his body was completely unthinkable.

Mary nodded. “And that’s what I told my sister, who just happens to be the lieutenant in charge of the night shift. Everything will be dropped from your record in a few days, Sebastian.”

Mary waved one hand at him. “Don’t worry about it. If you feel the need to repay me, you can volunteer extra hours at the shelter. We’re always shorthanded there. You’ve seen that for yourself.”

Seb had been staying at the homeless shelter run by the church ever since he’d been released from the hospital a month and a half ago.

“Right now, you’re working twenty hours a week for the shelter,” Mary continued. “Add an extra hour a day for a month or so, and we’ll call it even. With the holidays coming up, we’ll hopefully be getting a lot of donations that will need sorting. Clothes, food, toys—stuff like that. You can be in charge of dealing with it, after you’ve done your cleaning and other work that you’re paid for. Deal?”

Telling her that he needed to run away in case his former ‘Master’ found him would be the wisest thing to do. The safest thing.

Except the words wouldn’t come, and Seb murmured, “Yes ma’am,” instead. He’d have to leave. It wouldn’t be safe for him to stay. “Will it be on the police report that I live at the shelter?”

Mary started the engine. “Everything will be taken care of, Sebastian. Jane—my sister—will see to it. You’re safe at the shelter.”

Seb wanted to ask her how she could say that, if she knew what he’d been through. He hadn’t told her. The only person who knew the even half of the extent of what had happened to him was the counselor he saw twice a week, and Seb didn’t like to think she’d told Mary anything.

“In case you’re worrying over it, no, I don’t know what’s haunting you from your past,” Mary said.

Seb sucked in a breath, startled by her perceptiveness. “How did you know what I was thinking?”

Mary shrugged. “It was just a guess. You looked really worried, and you shouldn’t. It’s clear from the way you never discuss it that your past has some very bad stuff in it. Plus, you wouldn’t be at the shelter if you had a family and a warm home to go to. Ergo, I deduced that you have had a rough time of it, kiddo.”

Seb felt his cheeks heat up with a blush. He was twenty-three, hardly a kid.

“Not everyone in this world is your enemy, Sebastian,” Mary said, driving the van out of the parking lot. “You don’t owe me any explanations, but I really will take a trade on the volunteering thing.”

Maybe I could stay around just a few days longer. And he’d stay away from the physical rehabilitation center.

And hope that, if there really was a God above, He’d keep Seb from being found by Peter Hughes, the sadistic bastard who’d stolen five years from him.

“I’ll do it, of course,” Seb promised Mary. He just hoped he could keep his word to her.

You get steam with this book but you also get angst and sweet too!

So all together I really loved this story and these two MC’s!
I would definitely recommend this book!

It still amazes me that even after all the books by Bradford that I have read, I am still drawn into the characters and can’t wait for them to get their HEA’s. Both Joaq...

Share what you thought about Vaqueros and Vigilance PRINT and earn reward points.