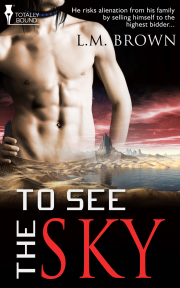 To See the Sky

Can a lab rat whore find love with the servant of his master, or will their different backgrounds and prejudices keep them apart?

In the distant future, where the devastation caused by war has driven the human race below the surface of the Earth, society is split in half. The rich scientists live in towers where they can monitor the surface and determine when the poisonous gasses have cleared and the world is safe for humans once more. Meanwhile the majority of the human race lives in crowded labyrinthine caves, where life is harsh and short. Uneducated and with no real prospects for the future, a 'lab rat' is lucky to live to see thirty years of age. Employment options are minimal and few can escape the fate of choking to death on the dust of the caves.

When AJ, one of the poorest members of society, needs credits for medicine for his sister he is in a desperate situation. With no other options available he risks alienation from his family by selling himself to the highest bidder. Love is the last thing on his mind, but while Blake, his new owner, might not be Mr Right, Ryder, his servant, just might be. Unfortunately, their different backgrounds, prejudices, and AJ's brutal owner seem destined to keep them apart, but true love can be theirs for the taking, if they can only find a way.

Reader Advisory: This book contains scenes of dubious consent, violence and voyeurism. It is the prequel To Change the Stars.

To See The Sky

AJ4982—known as AJ—squinted at the ‘employee wanted’ cards pinned on the wall of the agency. He could only read the figures on the cards and had no idea what jobs they offered. He didn’t care, he’d do anything to raise the credits for his sister’s medicine. Finally he spotted one with the figure 500 printed at the bottom in bold black lettering. He grabbed the card from the wall and marched over to the clerk’s desk.

"Hi, I’m Landon. How can I help you today?" the bespectacled clerk said as he took the card from AJ’s outstretched hand. His eyes widened slightly as he scanned the job details before turning back to AJ.

"Put this back where you found it," Landon ordered as he passed the advert back.

"I want to apply for the job," AJ stated.

Landon looked him over, taking in his messy hair, ragged clothes and swiftly assessing him to be one of the uneducated masses. "You can’t do this job."

Landon looked at the card again and cleared his throat before reading the text. "‘Wanted—Laboratory Technician with at least three years experience in bio-science for temporary assignment in sector R9’. Still think you can do the job?"

AJ ducked his head, embarrassment sweeping over him.

Landon gave him a sympathetic glance. "Can you even read?"

"I can read enough," AJ snapped.

"You can read figures, the same as the rest of the lab rats," Landon corrected. "You can tell the time, see what things cost and make sure you’ve been paid correctly. The scientists need their staff to be properly educated. Now, what was your last job?"

"I was a runner down in the tunnels," AJ replied reluctantly. With the surface of the planet uninhabitable after the Last War, the human race had taken refuge beneath the ground. The underground community was outgrowing the caverns they inhabited at an alarming rate. The original emergency caves had filled as soon as the survivors took refuge. Within just two generations the cave system could no longer hold everyone and the tunnelling downward had begun. More than five hundred years later the digging still continued, with twisting tunnels stretching out in every direction as they struggled to accommodate the ever-increasing population.

"I’ve got nothing for a runner these days," Landon said. "Since the collapse in sector C14 workers in the tunnels are being laid off. No one’s hiring at the moment."

AJ knew all about the collapse in C14. He had lost a friend in the accident and several lab rats from his own sector had been injured badly enough that they would never work again. AJ had been in sector C13 at the time of the collapse and he could still hear the screams from the neighbouring sector as the roof caved in on the diggers and runners who were trapped within it.

Landon sighed and tapped the screen of his hand-held computer. "Can you wait tables?"

"How much does the job pay?"

Landon gave him a stern look over the top of his glasses. "Lab rats can’t afford to be picky."

The clerk’s jaw dropped. "What sort of trouble have you got yourself into?"

AJ bristled at the implication he had done something wrong. "It’s for medicine for my sister. The physician has given her three days if she doesn’t get the lung decongestant. What have you got that’ll get me the credits?"

Landon shook his head. "I’m sorry. I’ve got nothing. Have you thought of moving her to a less dusty sector?"

"Of course I have. We don’t have the credits to move either. There must be something I can do to get five hundred credits." AJ had no intention of giving up. He had too much at stake.

Landon contemplated him for several minutes before glancing around the office. When he appeared satisfied no one lingered in earshot he leant forward and lowered his voice. AJ inched closer as well.

"I’ll do anything," he repeated.

AJ breathed a sigh of relief. "And unofficially?"

"If you’re collared you can earn upwards of one hundred credits a night, depending on what you’re prepared to do."

"What do you mean?" AJ had never heard of the expression ‘collared’.

"Some of the waiters wear collars to advertise they’ll accept credits for sexual favours."

AJ jumped backwards as though he’d been bitten. "Prostitutes?"

Landon waved his hand frantically. "Keep your voice down."

AJ cringed. "I can’t have sex for credits."

"You can get your credits in a single night if you find someone who’ll accept your prices. You set your own. Get lucky and you could make your five hundred with a single blow job."

AJ looked at the three collars Landon pulled out from his desk drawer. The first was red, the second blue and the third silver. They were all about an inch wide and each sparkled in the dimly lit cave with blinking coloured lights.

Read this book. Especially if you are a fan of sci-fi/futuristic stories, a fan of unique, creative stories, or a fan of meant to be. This is a wonderful book � so imaginative and exciting. I loved...

Share what you thought about To See the Sky and earn reward points.