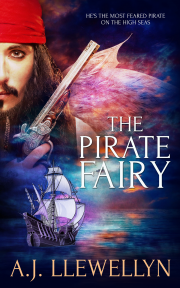 Denny Derrick Dalton is the most feared pirate on the high seas, but he’s not a bad guy. He’s just having a very bad day…

It’s 1841 and the high seas are a dangerous place for anybody. Denny Derrick Dalton’s the most feared pirate in the choppy waters, but his risky reputation takes a hit when a wicked old witch curses him and gives him a pair of fairy wings. It’s hard to boss your crew around when you look ridiculous. Not only that, he has no idea how to fly.

Denny’s depressed. The witch, hiding as sweet Princess Fortunata, has left his ship and taken her brother, Prince Merritt, the man Derrick deeply loves, with her. Can his luck get any worse? Oh yes, it can. His crew mutinies and sells him to a slave ship.

But it’s not just any slave ship. This one’s bewitched, and Denny’s soon taken to a magical court where he must explain his rotten behavior and fight for his life.

But can he save himself to rescue Merritt, who’s at the mercy of his wicked sister’s magic?

Reader Advisory: This book contains sex scenes with multiple partners, scenes of abduction and references to physical and sexual abuse and torture.

Denny kissed his captive’s smooth cheek, inhaling his masculine fragrance. Denny detected a hint of soap beneath some kind of woodsy oil on his skin. The young man’s fear spiced up the sheen on his muscles. He groaned as Denny squeezed his biceps.

Denny chuckled. “That’s what they all say.”

The young man bit his lip, but writhed toward Denny’s probing fingers, not away from them, igniting Denny’s passions anew. He ran his hand down the young man’s face. A knocking sound came from somewhere, distracting him.

Ignore it. They’ll go away. He slid his hand across the young man’s throat, letting his fingers pause to feel the quickened pulse. Denny kept moving down the smooth, taut torso. He couldn’t resist handling the juicy, buoyant cock begging for his touch. He cuffed the young man’s shaft with his fingers, trying to hold the blue-eyed gaze before him, but the knocking continued.

What’s the use? It’s just a dream anyway. I’ll never get him back.

Only in his dreams did Denny allow himself to utter his name. He still couldn’t believe he’d lost his beloved prisoner. He rarely dreamed about Merritt anymore.

Even if I saw him again, he wouldn’t want me the way I look now.

Burrowing his head deeper under the covers, Denny fought to return to his twilight world, enjoying the temptations awaiting him there. And there they were. How wonderful. It hardly ever happened that he returned to the exact moment he’d been interrupted in a dream, but Merritt’s smile drew him in once more. His blond-haired lover smiled, beckoning him. The bashing on his cabin door grew so loud the bed shook, wrestling Denny Derrick Dalton with a jolt from his sleep. So annoying, too, right in the middle of the good part about his captive prince chained up in stowage, and Denny about to shove his cock up Merritt’s ass.

This had become his favorite dream, but one often denied him. One so real he could feel the excited prince’s breath on his face, his feverish, whispered words, ‘Please don’t hurt me,’ the very things that made Denny want to do wicked, wanton things to the tethered male beauty.

But the insistent rapping continued, and Denny had to come back to reality. And for the furious pirate captain of the La-Di-Da, reality wasn’t so hot these days.

“Cap’n. Sir. There’s a boat up ahead,” came the timid voice from the other side of the door.

Denny stirred in his bed. Once again he’d made a mess of the bedding, and for a moment he hated what had happened to him so much that he wanted to find that—

“Sir? Are you in there? There’s a boat.” The voice rose to a squeaky pitch.

“I heard ya. Keep your breeches on.”

He knew now it was Sorenson, the stranded Swedish idiot he’d picked up in Port Victoria, in the Seychelles. Sorenson, the alleged cook who’d bought rancid flour from a tradesman with a fake mustache and an indecipherable accent. Sorenson had thought the bits of black stuff in it was caraway seeds and not weevils and rat droppings.

“So? What’s the big deal? Attack it. Do I have to do everything around here?” Irritated, Denny punched his pillow, rolled over on his stomach and stared balefully out of the porthole. He’d expected it to be early morning but was surprised to see the sun high and probably hot. He hadn’t left his quarters much in the last three months, and his sheets were getting a bit stinky.

It suddenly occurred to him. Why’s the cook coming up here? Why isn’t he making my porridge? Where is everybody else?

A second voice piped up, “But, sir. Cap’n. Sir. There are thirteen of ’em, sir. Fishing boats. All like sittin’ ducks in the port, like.”

Denny rolled his eyes. Parlayne Foster was his first mate and originally from New England, where they’d been headed for two weeks after bad storms steered them from Honduras, their original planned destination. Foster, however, had taken to his new life so well he and Sorenson had started talking like all the other Cockney gits Denny employed. And this from a Bostonian missionary’s son.

“Hoist the flag,” he yelled and got up out of bed. He visited the head then contemplated his wardrobe. He had to look the part. Tight black pants, thigh-high boots, crisp white shirt with a few ruffles. Aye. That was the ticket. It was easy getting on pants, but negotiating socks was difficult. He had no balance. He got so frustrated he stuffed his boots on, and with the scrunched-up socks inside, he fell down. Unbelievable. He’d been so sure the curse would have worn off by now, but it hadn’t. He slipped on the shirt and wanted to cry. He’d had to put two slits in the back to accommodate his new deformity. It just wasn’t fair. On top of this he threw on a long coat. That kept his little problem well hidden.

Outside the cabin, he inhaled fresh ocean air for the first time in weeks and almost keeled over in shock. He caught the gazes of a couple of deck hands. Both seemed surly. He’d spent years on the high seas with both of them, fucking them alternately and occasionally together. Denny had rejected both since the dreadful curse had hit him. He’d shunned all human contact. The only good thing about their grumpy expressions was that it seemed that Foster hadn’t told the entire crew of his misfortune.

Denny took a deep breath and climbed the companionway up to the deck. He’d forgotten how gorgeous the ocean was first thing in the morning. It glistened like glass and he could have allowed himself to become mesmerized, but he had work to do. He surveyed the deck of the La-Di-Da, a former British Navy privateer. Spotless. It had once been named for Queen Victoria, but Denny, a former midshipman who had staged a mutiny two years ago, before the ship had reached India, had renamed it. He’d always had a notion he should have been born in high places, and not in the shameful East London dump where he’d rubbed with others grouped as The Great Wen.

He tried to picture himself walking down the streets of his old neighborhood with his new affliction and couldn’t. For one thing he was unable to control his, er, condition. For another, he’d always prided himself on his good looks. Dark-haired, dashing, handsome.

It really is a cute, quick read with lots of light-hearted humor. I honestly do recommend the book, especially if you need a break from reading heavier, darker works.

Reviewed by The TBR Pile

This is a swashbuckler read full of sexy men and great magic. I really enjoyed the plot and the characters, Denny, in particular, is fantastic. The world building in this book is well done. I could...

Share what you thought about The Pirate Fairy PRINT and earn reward points.