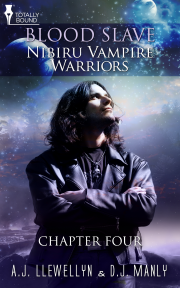 Stride and Zero are on the run from the Vampire Queen, who keeps presenting herself in various disguises. Having failed in her attempt to capture and control Stride, her own son, she resorts to other, deadlier games in trying to divide and conquer the two vampire warriors.

In Chapter four, the two vampires have survived the lure of the ghost ship's deadly grip, only to arrive in a snow-covered town that looks like a winter wonderland—with no beginning or end to it. They come to a small, brightly lit cottage and step inside, to face potentially fatal consequences. Zero is afflicted with a horrible ailment, and Stride is forced to confront the were-lover he once cherished and couldn't save…

Stride and Zero must rely on each other and learn to trust one another. As increasingly tense as the battle on Niburu has become, the two vampires find that their growing passion is not only their strongest, binding force, but in and of itself, the kind of Eden the planet on which they're stranded was supposed to be.

Reader Advisory: This book is part of an ongoing serial series, best read in order as it continues.

Stride dragged his gaze away from the dancing corpses.

The young boy called Tommy stood in front of Stride, his face contorted with an expression which could only be described as macabre.

Stride looked down at the boy. “What do you mean, I’m finished?”

“This part of your journey is over.”

Tommy’s face suddenly morphed into that of his mother.

Stride took a step back.

“Oh yes, my love, you more than passed.” A wicked laugh emanated from the child, then he vanished into thin air.

Stride shook his head, then glanced around him. Damn, where in the hell has Zero gone now? He’s always getting himself into something.

Something told him that if Zero got seduced by the dancing, they’d perish here on this ghost ship.

Stride frantically began to scan the deck for Zero in earnest, moving through the throng of ghostly dancers, trying to ignore their invasive, icy fingertips on his exposed flesh. The ship started to rock and roll just as Stride melted into the crowd. Water washed up over the deck, and the dancers gathered more tightly around him. Stride gritted his teeth.

“Be gone with you!” By some miracle, the dancers faded away from him. “Zero,” he called out frantically again. “Where in the hell are...”

“Here,” a voice called back. A hand clutched his arm and pulled him back against the rail.

Zero had to shout over the roar of the waves. “Thought I’d lost myself. They didn’t want to let me go. Oh, but Stride, it was wonderful,” he said, his laughter sounding light and full of merriment. “I couldn’t resist.”

Stride scowled. “That’s the pussy coming out in you. It’s going to get you real dead one of these times.”

“Well,” Zero snapped, “I’d rather be a pussy than an unfeeling, cold son of a...prick!”

“Fine,” he muttered. “How come you weren’t at least a little seduced? This is all contrived by that evil bitch of a mother of yours, isn’t it?”

Stride glanced at him sideways without cracking a smile. “Undoubtedly, but she doesn’t know me at all. You see, I don’t...dance.”

Zero stared at him for a moment, his eyes widening, and then he started to laugh. “You’re unbelievable.”

They pull you into a wild and original story that keeps you captivated not wanting to put the book down...You get sexy, hot and tantalizing characters that will have you needing a towel, a glass of...

Mr. Llewellyn and Mr. Manly continue their intriguing story...I love how the paranormal aspects are interwoven in the plot.