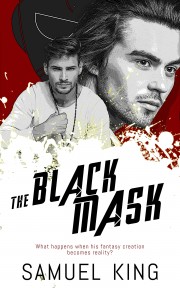 Charlie is torn between two men—one who seems unreachable, the other a superhero who steps out of a poster.

Charlie is the young, handsome writer of The Black Mask superhero adventure series. Recently broken up from his long-term boyfriend, he finds himself developing feelings of lust and love for his editor, the gruff, clearly straight Sam. Charlie’s love life takes an even more unexpected twist when his fantasy creation, The Black Mask, somehow becomes a reality—and his lover.

Sam Bradley is giving me a lecture about the latest installment of The Black Mask, the series I write for his fantasy fiction magazine, Exciting Adventurers. I don’t know why I still make a habit of coming to his office. It’s cluttered and pokey and, lately, Sam always seems to be giving me a stripping down—and not in a good way.

Actually, I do know why I keep coming back. It’s because Sam is hot—not in a fantasy boyfriend kind of way, but in a ‘real man, needs a shave, could do with a haircut but is still so sexy’ way. It started out that I just fancied him. I’ve always been a sucker for unobtainable men. But over the months that I’ve been making excuses to pop up to his office, I’ve developed a real thing for the guy. There’s another side to him, apart from the whiskey-drinking hard man he projects. He doesn’t show it often, but the softer Sam is caring. When his last girlfriend ended their relationship for another guy, he was devastated and we ended up talking for hours as he opened up. I think that’s the point where my feelings went from pure lust to actually caring. But what can I do? Sam is one hundred percent straight.

The other reason Sam is not boyfriend material, besides the being-straight part, is that he sometimes seems a bit homophobic. Unlike most fantasy fiction magazines, Exciting Adventures is yet to embrace the gay community. Sam likes to keep things very heterosexual, and he’s not happy that the character I invented, Alex Dark, aka The Black Mask, has started flirting too obviously with other guys.

“I don’t mind him flirting in a blokey way with gay guys,” says Sam, resting his elbows on his desk. “You know, like he’s being friendly but has no interest in them, but in this latest installment when he tells that guy he has a cute butt? That’s going too far.”

“Well, what if I see The Black Mask as bisexual?” I ask.

“Well then, I’d say take him to another magazine,” says Sam.

I wish I could tell Sam how I know for sure that The Black Mask is bisexual, but even I don’t quite understand. When I wrote the first story about The Black Mask, it was as if someone was dictating it to me—or actually, more like I was seeing a film in my head of how the story should pan out. And it had been like that ever since. I’d sit down at my computer with barely an idea in my head and images would just float into my brain. Two hours later I’d have the next installment. I decide not to raise this bizarre element of my writing process and instead come back at Sam with another approach.

“Your readers love him. He’s the main reason Exciting Adventures still sells while other fantasy mags have disappeared or gone digital-only. He has a cult following.”

Sam leans forward across his desk. He really is bloody sexy. He has striking green eyes and full, slightly dry lips that he licks frequently. He’s too macho to use lip balm. It’s hard to tell how old Sam is, because his face is always masked by about four days of stubble, but I’d guess he’s in his late thirties, about fifteen years older than me. He took over Exciting Adventures from his old boss, a guy called Frank, who launched the magazine about forty years ago, when fantasy and sci-fi mags sold by the truckload. These days, it only sells a few thousand copies a month and pays a pittance to contributors like me, but Exciting Adventures is fun to write for, apart from Sam’s apparent homophobia.

“I’m not anti-gay,” he says, his gruff voice faltering slightly over the word ‘gay’, as if he finds it hard to say, “but I need to think of the readers and what they want. A lot of them have been reading Exciting Adventures for four decades. They’re not ready for their superheroes to start boning other guys.”

I briefly imagine leaning across the desk and kissing those lips—a long, slow kiss that will silence him for a shocked moment. Then I’m angry with myself for liking this man so much and I challenge him instead.

“Are you sure it’s not just you that isn’t ready?” I ask, shifting in the hard-backed chair I’m sitting in. The jeans I’m wearing are skinny fit and very tight across the crotch, and I’m getting turned on. Hearing the words ‘guys boning each other’ come out of Sam’s mouth has that effect on me. I’m pretty sure Sam can’t see my lap from where he’s sitting, but at some stage I will have to stand up and these jeans won’t hide a raging hard-on.

Samuel King is London born and bred, and spent his twenties and thirties hanging out on the London gay scene, mixing with some true characters and even finding romance on a few occasions. Now more likely to be found eating in a nice restaurant on a Saturday night than clubbing, he also enjoys reading across many genres, watching films—especially old horror films and romantic comedies.

This was actually a pretty good little story. Imagine if all the posters you’ve ever had or any of the superheroes you dream of in movies or tv or in the comics, came to life and wanted you for t...

Share what you thought about The Black Mask and earn reward points.