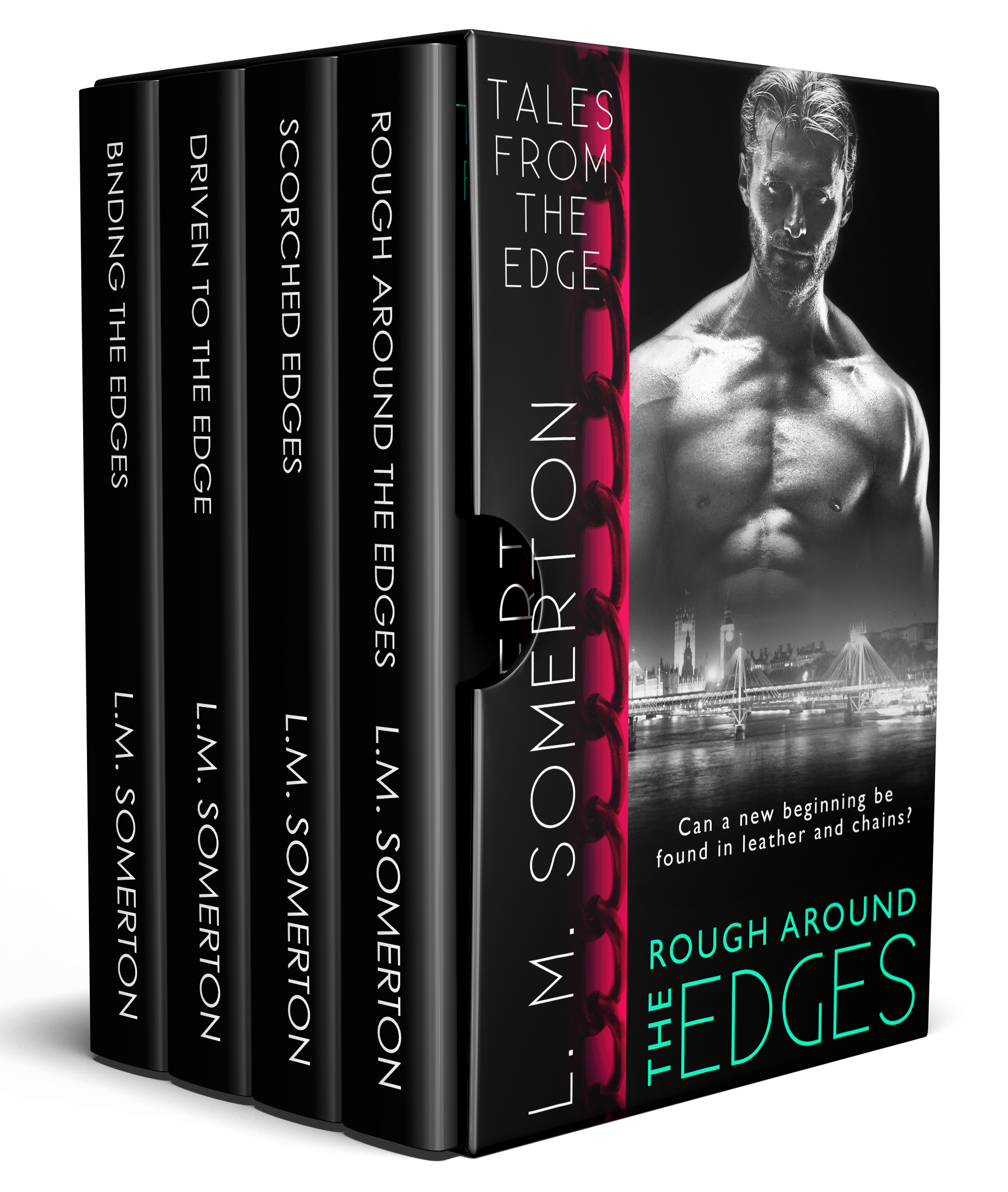 Tales from The Edge: Part Two
Rough Around the Edges
Can a new beginning be found in leather and chains?

The old saying that you can choose your friends but not your family is proved horribly true for Kai, as the mysteries of his past are revealed. As he and Harry start out on their journey together, they must contend with bullets as well as bondage, danger alongside domination, and it’s not easy to establish trust when the whole world is going to hell.

Fireman Salter Beauman, Beau to his friends, has had his eye on cute Marty Standish ever since he helped rescue Marty and his boss from the bombed out rubble of Temple Church. An analyst for the security services, Marty is cute, geeky and submissive through and through—even if he doesn’t know it yet.

With a serial fire starter making inroads into Beau’s life expectancy, he decides that there is no time to waste and introduces Marty to the D/s lifestyle. Marty responds with wide eyes, an insatiable desire to learn and the ability to turn Beau on with nothing more than a wiggle of his slim hips.

But Beau has a second, far more malevolent admirer. ‘See me dance’ is the message left at a series of increasingly dangerous fires. Beau and Marty must work together to catch a psychotic arsonist before their love goes up in flames. Literally.

Driven to the Edge
Not all limits can be negotiated.

The Edge is reaching a major milestone. After ten years in business together, Doms Joe Dexter and Heath Anders are planning a celebration and new beginnings. But even the best-laid plans can be thrown off course.

When Olly, Joe’s beloved sub, gets caught up in a hostage situation involving Special Forces soldiers, PTSD and blood diamonds, a party is the last thing on Joe’s mind. He hates the lack of control, and the thought of losing Olly takes him close to the edge.

Joe is not the only one reassessing his priorities. Olly needs Joe’s strength more than ever. He feels safe only in Joe’s arms or in his bondage.

Can Joe and Olly find sanctuary in each other or will their latest adventure drive them apart?

Binding the Edges
Never let go of the one you love.

After recent traumatic events, Olly is finding it hard to get his head around what happened. While he tries to deal with a maelstrom of emotions, renovations at The Edge are in full flow, alongside preparations for tenth anniversary celebrations. Joe, his Dom, recognizes Olly’s delicate state of mind and does his best to reassure him. A trip to the New Forest with their friends, Aiden and Heath, helps the healing process.

Returning home, Olly and Aiden focus on preparations for the party. When Aiden is called away, Olly takes a walk to clear his head, keeping his eye on a brewing storm. To his horror, he discovers Mark Vickery, an old enemy, has landed on the island by boat and is out for revenge.

With Olly missing and the storm raging, Joe, Heath and Aiden set out on a rescue mission that unfolds in a way none of them expected. Can the storm wash away the past or will Olly and Joe’s future be destroyed by a twist of fate?

Reader Advisory: These books contain scenes of sexual abuse and references to physical abuse, violence and a hostage situation and characters who have extremely prejudiced views.

The moment Kai walked into The Underground clutching Olly’s hand, he knew he’d found his place in the world. The club smelled of leather and polish and men. The low light soothed his eyes and made him feel less visible, which suited him just fine. He liked to disappear into the background—it was safer that way. Joe steered them toward a table ringed by comfortable low chairs but they couldn’t sit down straight away as there were so many people milling around them that it took a while to get through the throng. Kai lost his grip on Olly and grabbed hold of Joe’s sleeve instead while Olly held onto Joe’s other arm—it was the only way to avoid being swept away.

Kai turned around. Someone was standing on the bar, yelling.

“Give them some space. You’ll hear all about it soon enough.”

The crowd thinned as people went back to their tables and settled down, though the level of chatter and sense of excitement remained high. The man from the bar hopped down and came across to speak to Joe. Kai earwigged shamelessly and caught a little of their conversation.

“Why don’t we let Carey and Alistair get reacquainted and I’ll get the three of you some drinks?” Though he was talking to Joe, the man—who Kai figured had to be one of the bar staff—kept his gaze firmly fixed on Kai.

Kai examined the floor, afraid that if he looked back, those stormy gray eyes would mesmerize him.

“Sounds good,” Joe answered. “It was a long drive. Fresh orange juice for all of us please, Harry.”

Now Kai knew the man’s name. Harry. He liked it. It sounded strong and confident, just like the way the man appeared. Joe took a seat at the table and Olly immediately clambered onto his lap. Kai didn’t sit down straight away—he stood and took in the view. Everywhere he looked there were gorgeous men—all shapes and sizes, all colors and ages. Men who seemed comfortable in their skins.

His eyes widened as he realized just how little some of the club’s members were wearing. He spotted latex and leather in a variety of colors, though black was in the majority. Most of the chairs were occupied, but there were also men sitting on cushions on the floor or kneeling, with their heads bowed. It was a feast for Kai’s eyes. Belatedly, he realized that he was staring and that his mouth was open. He snapped his lips together and cast around anxiously to see if he’d offended anyone. If the winks he got when he made eye contact were anything to go by, apparently he hadn’t.

Kai checked the whereabouts of his new friends, needing the security of knowing where they were and that he wasn’t alone. Alistair stood a few feet away, wrapped in the arms of a handsome older man who acted like he’d just won the lottery. Kai assumed that must be Carey, Alistair’s Dom. Just behind where Kai loitered, Olly sat in Joe’s lap, chattering away while Joe listened, looking cool and serene. Kai felt a little pang of envy at how happy they all seemed. Still, he should be grateful. He’d just been rescued from a terrifying ordeal. Alistair had said he could stay with him and Carey for as long as he needed. He was safe. He had somewhere to go, people who cared about what happened to him. He had much to be grateful for.

“I’ve never seen so much leather in one place before,” Kai whispered. He hadn’t addressed the comment to anyone in particular. It was just an observation but Olly grabbed his hand and tugged him to a chair.

“You should be here in the evenings. There’s considerably more bare flesh to ogle then. Though it’s hard to beat hot men in tight leather at any time of the day. I don’t think there should be time limits on visual stimulation, do you?”

Kai shook his head hard. Olly made a good deal of sense.

“You shouldn’t be eyeing up other men,” Joe snapped at Olly. “And they shouldn’t even be glancing in your direction. You’re mine.”

Olly chewed his lower lip and gazed back at him adoringly. “You’ll just have to punish me, Sir.”

Kai giggled. Olly was so naughty. He liked him enormously. They could have loads of fun together. He perched on the edge of his chair and people-watched for a couple of minutes. There was so much eye candy to enjoy. Not that I’d have the first clue what to do if one of these men approached me. Olly and Alistair seem to think that I’m a sub, but what does that mean? I’m not sure I want to be spanked!

Share what you thought about Tales from The Edge: Part Two Box Set and earn reward points.