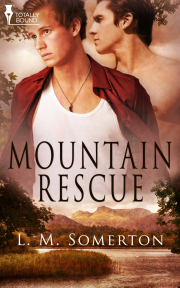 Every man needs a hero to catch him when he falls, but does that still apply when he's falling in love?

When Cal Somers loses his entire family to a drunk driver, he uproots his life and moves into the house he has inherited in the Lake District. When he falls—literally—into the arms of Ford Collister, the gorgeous but moody owner of a mountain equipment shop, Cal is confused and uncertain about his attraction. Will shy, submissive Cal find the courage to respond to Ford's dominant advances?

As an emergency paramedic and member of the local mountain rescue team, Ford is used to taking command and dealing with every situation the hills can throw at him. Cal, however, is a whole new challenge, igniting feelings that Ford feared he would never experience again. Tragedy in his past makes him cautious and he moves slowly, the pain of history giving an edge to his growing feelings.When Cal's life is threatened, the fear of losing him brings all Ford's possessive tendencies to the surface and, though Cal resists, he secretly loves Ford's assertive behaviour.

Only one thing is certain—when they finally take that leap of faith and overcome the tragedy of the past, sparks will fly!

Everything looked grey. The sky was a solid, ominous mass of deep slate, currently spewing the heavy sleet that seemed to be unique to the Cumbrian fells in summer. The stone buildings and silvery slabs of the pavement melded together, all sheen dampened by the miserable lack of light. Henry Jones shook himself like a large, shaggy dog, scattering water in all directions.

"Thank God for Gore-Tex! Christ, Cal, you’re going to need waterproof underwear in this godforsaken place. Are you absolutely sure you don’t want to come back to London with me?"

Cal spoke through the barrier of his scarf, which was wrapped protectively around his face. He chuckled and got a mouthful of fluffiness for his trouble.

All six feet five inches of Henry’s broad frame managed to exude a comical air of bemusement. He peeled off a glove, wrung the water from it and held out a large hand. "Well, good luck, my friend. I need to run if I’m going to get the next train back to civilisation."

With his slimmer hand, Cal grasped the huge paw, then pulled its owner into a soggy hug.

"Thanks for everything, Henry. I really appreciate it, especially you driving the car all the way up here. Give my love to Elena and the bump."

Cal knew from the goofy grin that crossed Henry’s broad face that he was thinking of his heavily pregnant wife. He was really going to miss his best friend. With a baby on the way, the two hundred- odd miles between them might as well be a thousand. Henry returned the hug with the affection of a protective grizzly bear, then headed off towards the small station with one last glance over his shoulder and a wave.

For a moment Cal felt a wave of sadness wash over him, but it was soon gone. This was a new beginning for him and he was determined to stay positive. The drunk driver who had managed to decimate his family for the price of a bottle of whiskey had been jailed. Months of legal red tape had finally been unravelled and Cal had inherited as the sole beneficiary of both his parents’ and his great-aunt’s estates. Even after death duties, at twenty-two he was a relatively wealthy young man. Of course, he would have given up every single penny to rewind time and bring them all back.

His Great-Aunt Ruby had spent Christmas at his family home as she had every year, and he could still see her, parked contentedly in the corner of the lounge with a bottle of sherry and a tub of salted nuts that must have played havoc with her false teeth. His parents had decided to drive her back to Cumbria and spend a few days touring the Lake District. If only he had offered to make the trip instead, they wouldn’t have been in the wrong place at the wrong time. The head-on collision, which had killed them all instantly, might never have happened. Images of the car, crushed beyond recognition, filled his head.

Cal felt the familiar burn of guilt, like acid in the pit of his stomach. His brain tried to convince him that it wasn’t his fault, but his heart disagreed. It would be some time before he could reconcile the two. He swallowed back the intense emotion that still threatened to overwhelm him at times and focused on his surroundings.

Though the buildings around him were familiar, Cal suddenly felt completely lost. He was at the end of the winding High Street, water dripping uncomfortably down the back of his neck. He needed to buy some supplies then get back to the house to start unpacking—his entire life was currently wrapped in cardboard and wriggly polystyrene worms. There was so much whirring around in his brain that he didn’t know what to do first. In the end he dived into the mini-mart and scooped random items off the shelves. Looking over his basket when he got to the checkout, he had no recollection of having picked up pickled onions or marshmallows. Eggs, bread, tea bags and milk had made it, so he wouldn’t starve, but it was going to be a close thing.

He stood outside the door, clutching his plastic carrier bag of shopping. Up ahead was a large outdoor equipment store. It was different from all the others he had passed so far in that there were no gimmicky signs in the window, no tourist tat lurking in the displays. Cal wasted a few seconds wondering about the number of people who actually bought stuffed sheep in the Lake District, or wandered around in walking gear whilst never actually venturing outside of the towns and villages. The place in front of him was called Mountains and had a caf� on the third floor—coffee and a respite from the rain would be welcome while he attempted to order his scattered thoughts.

He pushed open the heavy glass door and stood on the mat for a moment, while the worst of the drips from his clothing created a small puddle around him. The floor was slate flagged and eminently practical for dealing with mud, water and anything else that might be dragged inside by heavy boots. He pulled off his hat and scrubbed a cold hand through his shaggy blond hair, glancing around to locate the stairs.

I absolutely love Ms Somerton's books. Th interactions between Cal and Ford are so spot on, They make me feel as though I am feeling them. Her story-lines keep the readers on the edge of their seat,...

LM Somerton has a gift for creating wonderful characters and hard to put down stories. She's done this again with Cal and Ford in Mountain Rescue.

Share what you thought about Mountain Rescue and earn reward points.