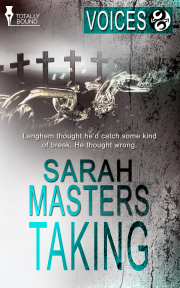 Book 4 in the Voices series

Years ago, Langham was on a case where missing men were being buried in other people’s graves. He’s now working undercover at a cemetery, trying to glean information. Is someone who works at the graveyard involved? Will new bodies be dumped there now that men have started going missing again? He isn’t sure, but when a man starts staring at him through the railings, Langham’s instinct kicks in. Something isn’t right.

Before he can do anything about it, he’s kidnapped and bundled into a van. Later, his lover Oliver is shoved into the van, too, and they’re taken on a long journey. With the dead remaining silent and not giving Oliver anything to go on that will help them in their dilemma, the pair realise they’re on their own.

Left hanging by their wrists from a cellar ceiling, the two men acknowledge that maybe this time their luck really has run out. But what they don’t see is what’s going on in the big house they’re incarcerated in, and that maybe, just maybe, someone might be on their side…

Publisher's Note: This book was previously published elsewhere. It has been revised, re-written and re-edited for release with Totally Bound Publishing.

Oliver rolled over in bed after a restless sleep. He opened his eyes, glad to see he’d beat the alarm. He was fucked if he was going to doze for another half hour. If he did, he’d feel more tired than he did now. He stared around their bedroom. How different it looked compared to in the darkness, where every shape seemed to have malicious meaning. The furniture became monsters, the corners shadowed areas where ghosts hovered. Now, meek sunlight plagued the curtain edges—another dreary day out there, then—and any semblance of night-time fear had vanished.

All that was left behind was a lethargy that had Oliver feeling heavy of body and sluggish of mind. Walking to work seemed a chore, something he could well do without. The effort—too much today.

He’d use Langham’s car instead. During the previous few hours—which had dragged endlessly—to get his mind off the recent horrors they’d been through, he’d contemplated taking up a hobby. He still hadn’t bought a new car for himself since his had gone off the road and totalled in the Sugar Strands case. Pointless, really, when Langham could use one from the pool at the police station. He thought of anything to occupy his brain so he didn’t entertain visuals of what they’d experienced. Their two recent holidays had turned into murder cases, the last one especially traumatic.

With the idea in mind to do a proper supermarket shop in his lunch break, Oliver had a list of shit he needed to buy. He was getting right into cooking—they ate too many takeaways because of Langham’s erratic work schedule. Still, with Langham undercover and doing six-hour shifts instead of twelve, there was more chance of them eating at normal times. Today Langham had been switched to days—not afternoons that stretched into twilight—so Oliver could drop him at the cemetery then pick him up later.

Oliver grinned at the name he was supposed to call Langham when in front of the cemetery workers. Robin Briggs. It was obvious why a name change was needed. If those men came back to bury the bodies of used and abused homeless men in already established graves, Langham’s real identity had to be undisclosed. He needed to gather as much information as he could before he went back to regular police duty. That had nearly been on the cards—if Langham hadn’t spotted some weird bloke staring at him through the iron railings while Langham had tended to a grave.

Things always went tits up. He didn’t know why he expected anything to run smoothly. He’d been lulled into a false sense of security when Langham had agreed to go undercover. How could he have thought nothing untoward was going to happen?

He stared at Langham, who still slept—and had done so all night as far as Oliver knew. At least Langham hadn’t been affected by what they’d been through. He’d gone straight from having Caribbean men chasing their arses to the undercover stint at the cemetery. No time between, no time to dwell. Maybe that’s how the man coped. If he concentrated on what was at hand, he didn’t have a moment to think about the past. What would it take for him to have frequent nightmares so he could show the world that underneath his brash, detective persona, he was soft as shit, had tender emotions just like any other Tom, Dick or Harry?

He’s too strong half the time. Carrying so much weight on his shoulders. At some point he needs to do what Chief Jones said and talk to a counsellor—or someone. Anyone. Just talk. Get things off his chest.

Langham was made of stern stuff, though—and that was good for his profession but not for his emotional well-being. Oliver worried Langham would crack. One distressing thing too many and he’d just crumble, unable to function until he’d got everything off his mind.

I can’t force him to listen to me, though. Can’t make him do anything he doesn’t want to do. Maybe it’s better that he doesn’t think.

Oliver knew from experience that thinking was a bitch on hairy legs. Especially when he couldn’t sleep without bad crap invading his dreams or he couldn’t sleep at all. Many a day since the Caribbean shite had seen him groggy, out of sorts, and generally so weary he could have done with sleeping through the day following a bad night. He’d got up for work regardless, though. And that place pissed him off. Being a glorified tea boy at the local newspaper had never been a career aspiration. Mind you, it was a job—better than not having one at all—and not many employers would give a man time off to go gallivanting around with his other half, helping out on murder cases.

Bloody ulterior motive, that’s why he let me do that. He got inside scoops on cases.

Saying that, a new editor was taking over this morning. Seemed a nice chap, if a bit older than the last. Went by the name of Eamon King. And maybe he’d be better to work for than the old editor, who was a single man, boorish and a bully sometimes. Eamon had a wife and kids, and he’d come across as kindly when he’d introduced himself, more the type of bloke Oliver wouldn’t mind having a pint with when the work day was done.

Eamon had agreed to Oliver having time off at a moment’s notice if spirit spoke to him and he was needed on one of Langham’s cases. And he didn’t expect any snippets of information.

Langham huffed out a quiet snore then opened his eyes quickly, as though he’d been startled awake by a sharp, loud noise. Oliver reached out to place a hand on Langham’s belly, reassurance in case he had had a bad dream and just hadn’t told Oliver he was having them.

Wouldn’t surprise me. Closed book sometimes, that one.

“Is it time to get up yet?” Langham asked, staring at the ceiling, blinking away the lingering smog of sleep.

“Nah. Got another half an hour yet.”

Langham rested a hand on top of Oliver’s. These were the times Oliver loved the most, where they were a normal couple, just being together without having to rush anywhere or do anything other than lounge about. The thirty minutes they had left before the alarm went off could be well spent. Either they could stay like this or, judging by the tent in the quilt, they could do something about Langham’s morning wood.

“Yeah. Digging those graves takes it out of me. Didn’t realise how unfit I was until I started aching from using lazy muscles.” Langham yawned, lifting his hand from Oliver’s to drape his arm over his eyes.

“I wasn’t talking about that kind of stiff.” Oliver moved his hand down a bit, until the tip of Langham’s cock butted against the side of his palm.

“Oh, that.” Langham grinned. “If you want to do something about it, be my bloody guest.”

Oliver shifted closer, throwing the quilt back so he could see what he was doing. He stared at Langham’s cock. A sudden burst of pride snaked through him. That cock was his and his alone—they were an exclusive couple, no interlopers, no need for interlopers.

“You’re supposed to say you love me too.”

Share what you thought about Taking and earn reward points.

Over the years, I’ve often said that I write about what scares me. I have phobias—quite a few of them—and by writing them into my books I’ve found it helps to make me see the things that I find frightening might not really be that frightening at all. These are relatively small things, like spiders or wasps, or the ocean.