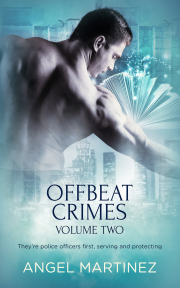 When a ferocious book attacks Carrington at his own birthday party, he believes it’s an isolated incident. But similar books soon pop up all over town, menacing innocent people with harsh bits of poetry and blank verse that deliver damaging physical blows. It’s a frustrating case with too many variables and not enough answers, and the stakes go up with each attack.

With the help of his misfit squad mates at the 77th and the public library’s Rare Books Department, the missing pieces decrease but not Carrington’s vexations. His commanding officer rakes him over the coals at the beginning of every shift. His police partner has lost patience with what she sees as his delusional relationship choices and his inability to pick the right man in a vast field of two. City Hall demands that the books be stopped immediately. It’s enough to put a nutritionally challenged vampire off his skim blood.

An orphaned kitten may be the only witness to romance and the impossible.

Officer Alex Wolf responds to a lot of ‘paranormal’ calls that aren’t. Exotic pet birds aren’t monsters and unusual dog breeds aren’t aliens. It’s a good thing he likes the Animal Control officers, but he both yearns for and dreads those calls where he runs into ACO Jason Shen. Jason’s scent is so delicious that Wolf has a difficult time humaning around him.

Animal Control calls take a disturbing turn, though, when Wolf and his lizard-man partner, Krisk, discover the impossibly mummified bodies of rats and an unfortunate mother cat. The rescue of the cat’s sole surviving kitten not only gives Wolf more time with Jason, which is both perplexing and wonderful, but also leads to dangerous discoveries. Something inconceivable stalks the city and its officers of the law. Wolf has to figure out what it is before it can attack and drain the life from the people and the kitten he loves.

Not even the ancient oak tree behind his parents’ house afforded enough shelter from the sun. Carrington tipped his wide-brimmed hat back and dared a peek up through the thick filter of leaves. Definitely a mistake. Now he couldn’t see.

He didn’t dare move with his vision in polka dots and stood there with a vague smile, hoping no one would approach him while he tried to blink away the after-images burned on his overly sensitive retinas. He’d even worn his best sunglasses for the occasion, hoping they would be enough if the promised clouds cooperated. No sign of meteorological relief yet.

“Carr? You all right there? You look like you’re having a stroke or something.”

“Manda. Thank gods.” He groped around until his police partner caught his hand. “I can’t see.”

Amanda tucked his hand into the crook of her elbow with a little pat. “What’d you do, stare at the sun?” She paused a beat. “Aw, crap. You did.”

“I just looked up through the leaves.”

She didn’t quite sigh, but the long indrawn breath was half of one. “Okay. I got you. Mom harpy coming in fast at twelve o’clock.”

“Please don’t call her that.” Carrington knew his mother hadn’t heard, though. He could tell how far away she was by the miasma of perfume that preceded her.

The birthday party had been his mother’s idea, of course. How could he have even thought about not celebrating his thirty-fifth birthday? Especially if it meant it gave her an excuse to invite all the old money and local officials to the affair. And outside? Of course it had to be outside. The weather in June was glorious and Carrington always exaggerated the symptoms of his ‘illness’ for attention.

Mother was hissing before she’d actually reached them. “Carrington, you can’t simply sulk in a corner at your own party. Oh, hello, Amanda. What a lovely…tie.”

“I’m not sulking. I’m doing all I can to remain vertical and not embarrass you.” He blinked, bringing her disapproving, much-facelifted features partially into focus.

“There’s no need to be so melodramatic.”

His mother expertly performed an Amanda-ectomy and claimed Carrington’s arm for herself as she led him toward the long buffet table on the patio. The caterers had brought out the cake, several layers of rococo chocolate perfection he would’ve enjoyed if he’d retained the ability to eat. As the guest of honor, he was still expected to cut the damnable thing.

“Just make an effort, dear, that’s all I ask. You haven’t even said hello to the mayor or the police commissioner.”

“Could we move the table six feet toward the house? Or angle it so the cake is in the shade?”

She tsked. “Of course not. The caterers would have to remove everything first. The world doesn’t always revolve around you, Carrington.”

Fine. At least the headache wasn’t blinding yet. He would cut the cake, say a few hellos, then dive into the cool shadows of the house. He would manage. Amanda had been helping him practice at the end of their night shifts. Acclimation. That had to be the key. He couldn’t keep fainting every time he was in direct sunlight for more than a handful of minutes.

“You really should learn to do this yourself, Alex.” Mom tsked as she turned the shirt to work on ironing the right sleeve. She was the only one who called him Alex—A. Wolf, some researcher’s idea of a joke.

“I know. I’m sorry.” Wolf leaned against the counter devouring his eggs and bacon. Maybe it was one of those bad son things, but he’d always liked this. Standing in the kitchen with her first thing, with the iron going back and forth, back and forth was soothing. “I’ve watched you lots of times?”

“It’s not the same as doing. You know that.” She gave that sort of definite nod she had when coming to a decision. “When you come home tonight, you have a date with the ironing board.”

“No, before.” With a little flourish, she set the iron aside and whipped his shirt off the board. Then she glanced up and laughed. “Your face! You’re not going to die if we have dinner fifteen minutes late.”

Wolf couldn’t help a disgruntled growl. “I get so hungry at work.”

“Yeah, yeah, impulse control.” He glowered at his work boots. Being human sucked some days. At least there’d been the good kind of bacon for breakfast. He licked his plate clean and set it in the sink.

“Exactly.” She wrapped her arms around him, her silver hair just tickling his chin. Had she always been so small? “You’re doing so well these days and I’m so proud of you. But I worry. I won’t always be here, sweetie.”

“Mom, don’t say things like that.” He held her tight and kept the howl that wanted out to a whimper. He wished he could tell her that she would live forever. She had to. But he knew that wasn’t how things worked. “I miss Dad.”

She bustled to put away the ironing board, swiping at her eyes. “I do too. Every day. We always will and that’s normal. Get yourself presentable, Alex. You’re going to be late. Lunch is in the fridge.”

Well, fuck. Now he’d upset her. It always made his stomach ache. He hurried to get on his uniform shirt and tie, stopping at the mirror in the hall to make sure everything was straight. That had been one of his proudest days, when he’d first managed to make a tie sit straight and neat. Dad had been so pleased.

Wolf snagged his lunch from the fridge and his hat from the hall table, then did a quick about face and hurried back to the kitchen to kiss his human mother’s cheek. “Love you, Mom.”

“Love you, too.” She gave him a quick peck and smiled for him though her eyes were still red-rimmed. “Be careful today. Come back in one piece.”

“Always.” He shot her a grin before going out the front door, their goodbye routine ever since he’d been accepted to the police academy. Except Dad had once been part of that ritual, too.

At twenty-eight, Wolf was already twice as old as the oldest of his kind. His original kind. One of the issues the researchers had never been able to agree on was whether he would have a wolf lifespan or a human one, or something in between. Human was looking more likely but even humans didn’t live forever. His adopted parents had grown old and his heart felt stomped on thinking about it.

It had been almost a year since Dad’s heart had given out. Mom was doing better, so was Wolf, but he had howled for three nights running to the point where the neighbors had called the police. The regular police. That had been embarrassing for everyone involved and one of the officers had finally called Carrington to come talk Wolf down from the roof.

He jogged down the front steps to his waiting Wrangler and turned to wave to Mom as he drove away. The three-story semi-detached shrank in the rearview as he drove down to the bottom of Terrace St. Probably would’ve been better if he’d taken SEPTA to work but then Krisk would have needed to take public transit too. That would’ve just been too strange for everybody.

The story being told is extremely rich in character development and description, as well as story and the little details woven into everything that makes the world and the unit in particular very real....

This book totally delivered... Each book in this series gets better and better. I loved the first two, but I think this is my favorite – probably because I absolutely adore Carrington’s uptight, sligh...

Share what you thought about Offbeat Crimes: Vol 2 PRINT and earn reward points.