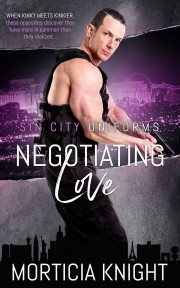 When kinky meets kinkier, these opposites discover they have more in common than they realized…

SWAT Team Hostage Negotiator Steve wonders why he can’t stay away from the spoiled rich Allistair, owner of Dark Fantasy Resort Casino. They have mutual kinks—ones Steve can’t find with other lovers—but there’s something else about the emotionally detached, beautiful man that calls to him.

Billionaire Allistair stays alone in the luxury penthouse apartment of his casino, terrified of the real world and of succumbing to genuine emotions. One night is all he ever shares with a plaything—he knows they only want the money and luxury he can offer them and nothing more. However, a muscled law officer scratches an itch that no one else can. Could Steve ever want more than the lust-filled encounters that have become such an addiction?

As they grow closer, they discover that there’s an uneasy balance between Steve’s everyday world and Allistair’s entitled one. They also have to make sure Allistair stays safe. Filthy-rich playboys are too tempting to those who seek the ultimate payday and who aren’t afraid to hurt someone to steal it…

Publisher's Note: This book was previously published by Pride Publishing. It has been expanded, revised and reedited for rerelease.

“Mr. Richmond requests your presence. If you would follow me, sir?”

Steve arched his eyebrows, careful to turn his head slowly to face the owner of the voice that had resounded next to his ear. The cacophony of the dance beats in the club made normal conversation impossible, so the bulky form of one of Allistair’s bodyguards stood very close. Too close. The man’s arms were crossed and his bland expression unreadable. Like all Allistair’s staff at the Dark Fantasy Resort Casino, the guard was impeccably dressed in what was no doubt a very expensive black suit. Steve idly wondered what the man thought about trolling for Allistair’s playmates.

Steve gave the guard a curt nod then followed him through the dense crowd, most of the revelers moving to the rhythm of the driving music. The blackness of the large club was punctuated by swirling lasers and the bright lights illuminating nearly naked men and women gyrating in sparkling cages. It was a place Steve could get lost in, get swallowed up by the noise and the atmosphere and let the sensual energy carry him away.

It was the perfect respite from the events of the day before, when he’d almost lost a young man determined to fall to his death from the top of the very casino he was now partying in. If the stunningly perverted Allistair didn’t happen to own Dark Fantasy, Steve would’ve rather been anywhere else.

However, he’d conceded that a trip to the resort club had become necessary in the hopes of being chosen by Allistair for a night of decadent fun. Steve had thought his fellow SWAT team member and best friend Cole had fucked the stress of the job out of him. He’d been wrong.

How does Allistair always manage to spot me in the crush of people?

It’d been at least a couple of months since he’d even been by the club. After his last encounter with Allistair, he’d promised himself to stay away for good. Despite the fact that the powerful casino owner had made it clear he only wanted sex from Steve, there’d been something about him. He was that indescribable mix of harsh and soft, salty and sweet. There was no point in getting wrapped up in someone who only wanted the occasional fuck.

When the near suicide he’d negotiated the day before wouldn’t stop plaguing him, his first thought had been of Allistair. Being a hostage negotiator—as well as a patrol officer for LVMPD—was a constant stress-fest and somehow, the usual release he got from Cole hadn’t been enough. It was odd, considering that Allistair was essentially a stranger. For whatever reason, he’d yearned for him when the need to purge his demons had become too unbearable. He counted himself lucky that Allistair apparently had the ability to spot him after all.

The guard unlocked a door that was almost invisible unless one knew it was there. It was located near the main elevators, but blended in with the blood-red and gold velvet flecked wallpaper. Like the previous times he’d been invited to be Allistair Richmond’s entertainment for the evening, Steve knew the private lift would open up on the top floor where his lover for the night lived.

Steve chuckled, which garnered a sideways glance from the typically stoic guard.

I wonder if Allistair actually is a vampire.

It would be too perfect. He dressed the part, had the mannerisms. Detached, unemotional, elegant and sexy as fuck—he’d make the ideal Dracula.

Steve mused as to whether his appearance was how he’d gotten the idea for the theme of his casino, or if he’d matched his look to it instead. Dark Fantasy had a gothic ambience that played to the vampire theme alongside allusions to Edgar Allen Poe, fallen angels and wicked fairies. It was unique within the equally unique Sin City. Allistair had certainly struggled to get the resort casino opened. When it had initially been under construction, the grand structure had been the target of a crazed group of vigilantes purportedly cleansing the city of immorality. They’d attempted to burn it down, but the damage had been minimal.

How do these guys manage to take all of this so seriously?

If Allistair hadn’t been the most amazing fuck ever, Steve would’ve mocked the whole thing and told the guy to go find another bottom to play sex toys and bondage with. The stray thought nagged at him. It was possible he was lying to himself to keep from being too disappointed if Allistair were to tire of him for good. Something spoke to him about Allistair, made him want to know more than what the man could do with his amazing dick and talented tongue.

Steve wasn’t like his fuck buddy Cole. They’d been best friends for over fifteen years—ever since their days in the military. But unlike Cole, who claimed he needed to wait until he was off the force for the real thing, Steve was ready to walk away from the casual nights. He was ready for someone he could build a life with.

Being enamored of certain kinks had made it difficult for him, though. Not all his proclivities were what would typically be associated with someone as big and built as he was. He’d lost more than one long-term relationship prospect when a potential partner assumed he’d be a take-charge top in bed. Allistair was a perfect match for him sexually—the only man other than Cole who’d ever tripped all his triggers. However, his expressed interest in the occasional fuck was only at Allistair’s discretion, and not what Steve wished for in the long-term anyway.

So what the fuck am I doing here?

The man who’d led him out of the club held up a hand for him to wait. Steve pressed his lips together. He liked being told what to do by a lover—as a matter of fact, it turned him way the fuck on. But Allistair’s hired guns always got under his skin for some reason. It wasn’t anything he could specifically point to—just that there was a manner to them that suggested they thought Steve was the same as a rent boy—not worthy of any real consideration. Then again, Steve imagined that Allistair procured some of his lovers that way and that most of the rest were there to see what they could scam off the unbelievably rich casino owner.

He let out a low sigh, refocusing his thoughts on what deliciously perverse things Allistair might have in store for him that evening.

The guard who’d led him to the penthouse gestured from the open door for him to come inside. Steve’s first inclination had been to make a snide remark about the lack of verbal communication. As a negotiator for SWAT, he was all about the need for properly voiced exchanges. He reminded himself that he was there to get fucked by a virtual stranger, not to teach someone how to interact with other human beings.

He passed by the guard with no acknowledgment and entered Allistair’s penthouse. It was still breathtaking even though it wasn’t the first time he’d seen it. The expansive space was all glass on one side, the night-time view of the overwhelming neon lights of the Strip spectacular. The rest of the main area was done in elegant black and white, with the occasional splash of red. A crystal vase, a few throw pillows, an original painting of skeleton Day of the Dead lovers, scattered roses.

Share what you thought about Negotiating Love and earn reward points.