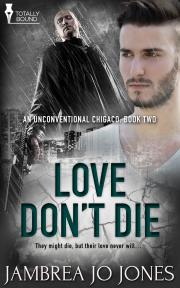 Moran Schultz was tasked with getting information from one Ward to another. He was all for helping his brother make Chicago a better place. What he wasn’t expecting was his lover to show up after a month of no contact.

Dutch Luciano isn’t going to let Moran go without a fight. They love each other and the gangs in charge of Chicago aren’t going to keep them apart.

Can Moran let Dutch back in or is it too dangerous? More than Chicago is on the line. Will love be strong enough to survive?

Moran Schultz accepted the package being handed to him and put it in his pants pocket. It was dangerous, but he wasn’t scared. It had to be done if he ever wanted a real chance to be with Dutch Luciano. Right now it wasn’t safe for them to be together. And if what had been promised was enclosed, it would blow things wide open. In his lifetime. He had been losing hope. The gangs had such a tight clutch on Chicago.

Not many would stand up to the gangs. There were pockets of resistance and they grew stronger every day, but with this vital information, their fighting might not all be for nothing. He didn’t know exactly what it was, but when Eduardo said it was big, people believed the head of the resistance and did whatever they could to help.

“It shouldn’t be considered brave to help when things go wrong. It should simply be common sense,” Darien Shaunessy muttered.

Moran nodded. “I guess you’re right. Well, I’ll take this and make sure it gets to where it needs to go.”

There was no need for his contact to thank him. Moran was doing the job his brother had requested of him. And he wanted to be free from the gangs just as much as any other low end worker in the grid.

He watched Darien walk out of the store and if he wasn’t mistaken he was headed to Farris O’Laughlin. The crazy brother. Fuck. He needed to get out of there. Was this a set up? Eduardo wouldn’t lead him to a set up. He was too careful. Moran continued to watch them and no enforcers charged the building.

One of the biggest families was involved? He wasn’t going to ask any questions—hell, he should probably forget what he’d just seen. It wasn’t his job. Darien did seem a bit cozy with the brother. He slowly backed away and edged out of the back door. The drugstore was a safe zone in Second Ward. His brother’s people ran it, but it never hurt to be as safe as he could. He wasn’t as important as his brother, but that didn’t mean people wouldn’t use him to get to the head of Second Ward’s resistance.

Moran closed his eyes. That voice. He knew that voice and it shouldn’t be here in this ward. Fucking Dutch Luciano. The guy used to be part of the gangs, but was now a member of the resistance. The last time they’d gotten caught together one of the enforcers had run Dutch’s tag and found he wasn’t where he belonged. Moran had had to watch while his very soul had been ripped out punch by punch. He’d gotten off easy because he was supposed to be there. They’d left Dutch in a puddle of blood at his feet. Moran couldn’t get that picture out of his head. Dutch’s eyes closed, his body motionless. Moran had thought he was dead. There wasn’t anything he’d been able to do as the enforcers had dragged Dutch off. It had taken two weeks to find out that his lover hadn’t died, and he’d vowed right then to cut off all communications. His heart ached at the thought of that happening again. He had to get Dutch out of there. The drugstore might be a safe zone, but the thugs still patrolled.

He turned. “Dutch—what the fuck, man? You shouldn’t be here,” Moran whispered. He couldn’t bring himself to look Dutch in the eyes.

It wasn’t that a lot of people knew Dutch was resistance, but the man shouldn’t be there. If he got caught he could be roughed up or even killed. It wouldn’t be a first offense for Dutch. And if the gangs found him, he would wind up dead.

“I talked to Frankie and he said you were here on a pick-up. It was important. I wanted to make sure you got it okay.” Dutch shrugged his broad shoulders.

“You send a flunky. It’s too dangerous for you here. We’ve talked about this.” Moran shoved his hands in his pockets and clutched at the flash drive.

“No, you’ve talked about this, but never listen.” Dutch reached out to him, but Moran moved away.

“It’s over.” Moran didn’t sound very convincing and he knew it. Damn it.

“No, it isn’t. So you can stop sending someone else to our meets. I miss you.”

Dutch’s voice was like a caress to Moran’s ears, but he couldn’t be weak.

“You think I don’t miss you too? We can’t be together. It’s going to get you killed.” Moran could handle being apart as long as he knew Dutch was alive.

There is so much passion in these two men, that you can’t help but to be captivated by them. It was told with so much heart that makes this story explosive to me. I love the way they mingle and...

In Love Don’t Die the seriousness of just how strong a hold the “gangs” of the “alternate universe” Chicago have on the city’s population is stressed.  The action was riveting.&nb...

Share what you thought about Love Don't Die and earn reward points.

People always ask me how I do it. I have a full time day job and a ten year old, plus I write. It isn’t easy. Balance is hard to come by and sometimes I can’t give my full attention to writing, but somehow I do manage to get it all done.

I work from 8:30am to 5:00pm. After that I go pick up my son and we talk about his day on the way home. Well, what he’ll tell me about it. We get dinner and I bug him about his homework. It really doesn’t leave me a bunch of time.