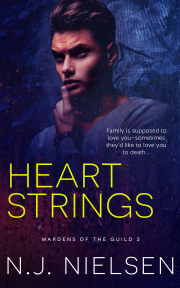 Book 3 in the Wardens of the Guild series

Family is supposed to love you—sometimes they’d like to love you to death...

Once he was a day warden to his two best friends…until one day he threw it all away. Now all Gabriel Gillis wants is it all back. He just has to make up for a century or four of trying to kill said friends.

Daven Banks is a member of the guild who doesn’t like change. Even more so when his day warden finds a mate and his replacement, Gabriel, is a self-confessed would-be murderer—even if he was terrible at it, thank god. It also doesn’t help that Daven is attracted to him.

It’s time for the fey to return from their entrapment and Artemis plans on claiming his two mates, Daven and Gabriel. At the same time, he has to reconnect with his own family.

Between bad shit they were already fighting and the new drama thrown at them by an evil sadistic witch masquerading as something she’s not, everyone needs to pull together to get the job done.

Can Gabe, Dav and Artie sort through all the bullshit to get to the heart of the problem, or will the heartstring curse end not only them, but the whole Banks family?

Some days it wasn’t worth waking up and dealing with the shit life dealt out. If the truth were told, Gabe had felt like this most days lately. Everything he did seemed to be wrong. No matter how hard Gabe tried, Daven still found some reason to discover some kind of fault with him being a replacement day warden for Eric. The man who had formally taken care of him for the last five-hundred years or so.

He couldn’t win for losing.

Gabe had even stopped all forms of practical jokes. He hadn’t pulled one in months, no matter how much the egotistical bastard had pissed him off…which was fairly often. It was like Daven was pushing him to quit. The problem was that Gabe had promised everyone he wouldn’t do anything so drastic this time as throw it all in and walk away from his charge—even if it was all he felt like doing right now.

“Sooner or later he’s going to get over the fact that you’re not me.”

Gabe just about jumped out of his skin when Eric spoke. Hell! He hadn’t even heard the other man enter the room. He didn’t want to discuss the problems he was having with his charge with anyone, but the truth was, maybe Eric would understand what he was going through.

“But I’m not you, and I’m never going to be you. As far as he’s concerned, if you’re not his day warden, then he doesn’t need one.” Gabe sighed. “The sad thing is, I even tried to do things your way, and it still wasn’t good enough for him.”

Tagh and Jory, Eric’s mates, soon joined them in the kitchen, and Tagh frowned. “If he thinks he can survive without a day warden, then we let him try.”

“What are you talking about? Am I fired?” Gabe’s heart was beating so fast he was sure they could hear it as well. This wasn’t what he wanted. He just wanted Daven to take him seriously and at least give him a chance.

“What’s going on?” Mitch asked, walking into the room. “Is Dav still being a dick?”

Jory snorted. “You could say that. Tagh has decided he needs to be taught a lesson.”

“I’m going to get Gabe here temporarily reassigned, and let Daven fend for himself for a while. We’ll find out pretty fast if he can survive without a day warden running after him,” Murtagh explained.

This was all moving way too fast. Gabe wasn’t positive Daven even knew how to take care of himself. He sat there listening as the others discussed how to go about doing this.

“No one is allowed to help Daven at all during this little experiment.” Murtagh looked right at Eric. “You know I’m talking about you, love, right?”

“Of course, I know you’re talking about me, but I also agree Dav needs a swift kick up the ass. None of the little chats we’ve had seem to have had any effect on him. It’s like they’ve gone in one ear and out the other.” Eric frowned at his mate. “I wish I could just shake the shit out of him and tell him to wake the fuck up and get with the program.”

Gabe grinned at his predecessor. “It wouldn’t work.”

“I know. The man is a stubborn jackass,” Eric retorted.

“We’re going to have to get everyone who lives here in on it, just so no one messes up what we’re trying to accomplish,” Jory added.

Eric’s fey mate, Jory, had come out of his shell a hell of a lot since he and his fellow prisoners had been rescued from being sex slaves, and was now one of Gabe’s closest friends at the house. Jory had told him he didn’t care about Gabe’s past as long as Gabe didn’t care about his. They had agreed their lives had started from the day of their friendship and that was that.

Murtagh scratched his chin. “I’m sure I can convince the guild to grant you permission to be the boys’ warden again for a little while. Especially when they know it’s going to teach Dav a very valuable lesson.”

“So, does that mean I’ll be on holiday and can sleep in with my mates?” Mitch grinned. “This is going to be so much fun. When can we start?” He stood. “I’ll go and let my boys know so they don’t say the wrong thing when they get up, and you’re in charge of looking after us all. We’re lucky the guild is stepping in. Remi was getting ready to take him out behind the barn and give him a good thrashing.”

Mitch chuckled. “I said the same thing, but Remi insisted it would be worth building one, just to knock some sense into Dav. I’ll even get Remi to talk to the demons so they know what’s going on as well. We want this to run as smoothly as possible. Is it bad that I can’t wait for them all to wake up now?”

“It’s not bad, but you do sound like an excited puppy. We have a plan. Tonight, when everyone gets up, Gabe will get stuff ready for Claudius and Isiah. We’ll see how long it takes for Daven to pull his head out of his ass and ask Gabe to come back,” Murtagh answered, before Mitch left them all.

Okay, they had a plan of sorts. Gabe was sure he could do this and not feel too guilty about leaving Daven in the lurch. It probably wouldn’t hurt so much if he wasn’t so attracted to the stupid git. Way back in the beginning, he had loved his wife, but he hadn’t been in love with her. Even back then he would have been happier with someone of his own sex, but it just wasn’t done, especially not in their family.

Jory stood. “I’m going to go check in with Silla to see how everything is going. She was telling me Nadal was still having some trouble adjusting to being free. He’s having nightmares about Rico. That idiotic guard did major damage on him while we were held captive. I like to be there for him when I can.” On his way out he placed a hand on Gabe’s forearm. “We’ll catch up later, and you can fill me in on how it’s all going.”

“Sounds like a plan.” Gabe gave his friend a smile.

When Jory had gone, Gabe realized Murtagh and Eric were watching him. Eric finally spoke. “You two really are friends, aren’t you?”

Gabe only nodded, because he wasn’t sure how he was supposed to answer.

“I like that he has someone he can come and talk to when he needs to. He needs that,” Murtagh added.

Gabe nodded again. “It goes both ways. He doesn’t judge my past and I don’t judge his. We gave each other clean slates.”

“I wish everyone thought the same way you two do. I’ve come close to knocking a few heads together for how they have spoken to the former captives.” Murtagh shook his head.

“Are you worried they’ll treat the draconian warriors who come to you with disrespect?” Gabe asked the guild member and current draconian sentinel.

Eric was the one who answered. “Anyone stupid enough to insult one of our people deserves what he or she gets. It’ll be the last time they’d ever insult a draconian warrior.”

“Eric, are you really going to be all right, with the plan of my ignoring Daven and letting him fend for himself for a while?” If the man said he wasn’t, Gabe would call the whole plan off and just put up with Daven’s behavior for a little longer, and hope he eventually came around.

“This is going to be good for Daven. I realize now just how much I spoiled Daven. I know I’m to blame for much of how he is, and for that I am truly sorry,” Eric said apologetically.

Murtagh grunted. “According to Lara, Daven has always been a bit of a diva. Always wanted things to be his own way. He’ll have to learn Eric belongs to Jory and me. We aren’t giving Eric back just because Daven is throwing a tantrum or ten.”

NJ needs to write like she needs to breathe. It’s an addiction that she never intends to find a cure for. When you don’t find NJ writing about the wonderful men in her stories you find her reading work by others who she greatly admires. NJ lives in the SE of Qld, Australia with her family who all encourage her writing career even if she does occasionally call them by her character’s names. NJ thinks that anyone taking the time to read her stuff is totally awesome.

I received a copy of Heartstrings by N.J. Nielsen from Pride Publishing in exchange for an honest review. This is the third in the Wardens of the Guild series. I did not read the first two because they...

Share what you thought about Heartstrings and earn reward points.

Other books in the Wardens of the Guild seriesView Series Page