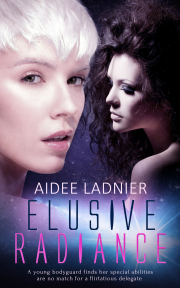 A young bodyguard finds her special abilities are no match for a flirtatious delegate willing to gamble everything on the galaxy trade talks.

Assigned to guard a diplomat at the galaxy trade talks, Security Officer Anais wants to shine during her first solo mission for the Chezeray Palace Conglomerate. An Elusive with the ability to make herself invisible, Anais knows her modified genes designate her servant class, but she yearns to be more than simply a protector to the beautiful delegate.

Savea Blackmun arrives alone to the trade talks with the weight of her planet’s future resting on her slim shoulders. Flirting with her pretty bodyguard reveals Anais’ knowledge of the colony markets and Savea realizes there’s much more to her protector than meets the eye.

As their attraction grows, will the diplomat and the bodyguard reject society’s rules to give in to desire instead?

Delegate Savea Blackmun lounged against the doorframe, ogling me. She swept her dark glittering eyes from my toes to my head.

“Are you supposed to be my bodyguard?”

Her overflowing breasts strained at the corseted front of her evening dress while her black hair cascaded from an intricate topknot. The sleeves of her burnished gold robe cupped her arms, half-revealing the tiny quatrefoil-shaped shoulder tattoos that signified her status and caste on her home planet.

“I am Sec Anais.” Feeling dowdy in my dun-colored jumpsuit, I offered a small bow. “Councilor Armen of the Chezeray Palace Conglomerate assigned me to you for the duration of your stay at the Levantar Los Ojos Spindle.”

She snorted. “I thought he’d send a male.”

My eye twitched. I’d been warned not to be offended by her ways and speech. Off-worlders from conservative planets like hers often had outmoded ideas. “I am female, but I assure you I am more than capable of protecting you while you conduct your business here.”

She raised an eyebrow but moved away from the doorway and spun into the room, her skirt billowing around her like a cloud. “Come in. I’m not quite ready.” Delegate Blackmun glided into the adjoining dressing room.

I hesitated but stepped over the threshold, the biometric scanner in the door confirming my identity even if the delegate had neglected to ask for it. I closed the suite door, my gaze sweeping the wide glass windows and ornately molded doors, checking entrances and weaknesses despite the fact that I knew this area well. This was my first solo assignment, but I’d been part of details around the hotel all my life.

Aidee Ladnier began writing fiction at twelve years old but took a hiatus to be a magician’s assistant, ride in hot air balloons, produce independent movies, collect interesting shoes, and amass a secret file with the CIA. A lover of genre fiction, it has been a lifelong dream of Aidee's to write both romance and erotica with a little science-fiction, fantasy, mystery, or the paranormal thrown in to add a zing.

Chris: This short novel was a real little gem. It was enjoyable, quite unique and leaves the reader encompassed in a happy  and hopeful frame of mind.
Although a light read it touch...

This book is amazing. I think I’m fast becoming a fan of Aidee’s work whether it’s MM or FF. This piece has exactly the right pacing, the right intuition from each character to the...

Share what you thought about Elusive Radiance and earn reward points.