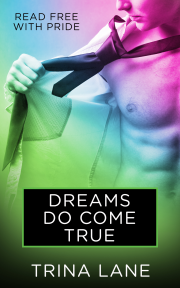 Sean Fitzpatrick has been in love with his foster brother Morgan O'Connell for years. The two men have a very close relationship, which others laughingly refer to as a bromance. When Morgan and his then boyfriend announced they were going to have a baby via surrogacy, Sean's heart had broken convinced his chance with Morgan was now gone forever. Now Morgan is a single dad and Sean is ready to claim his man. Can the three of them form the family the two boys had dreamed of as children or will history repeat itself?

This was a very well written and heart warming story.

For a free read this one was very good. It seems to me that most of the free reads that I have read stop suddenly, no real conclusion in them. Almost like there is more to the story but its not written....

Share what you thought about Dreams Do Come True and earn reward points.