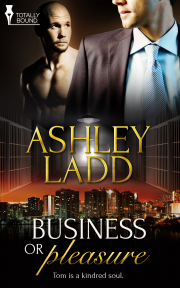 Tommy Boudreaux is extremely attracted to Guy Rogers even though he’s a passionate vegetarian and animal rights activist and Tommy’s family owns the most popular barbecue joint in town.

Guy Rogers is extremely attracted to his new realtor, Tom Boudreaux. As a passionate vegetarian and animal rights activist, he’s ecstatic that Tom is a kindred soul. He could never be with a carnivore. Unfortunately, Tommy isn’t really a vegetarian or an animal rights activist. He never said he was, either, he just didn’t eat meat when he was with Guy. And maybe he emptied his house of all meat and dairy products before inviting Guy over. In fact, Tommy’s family owns the most popular barbecue restaurant in town and, if his family has their way, he’ll manage the new location.

When Guy finds out that Tommy eats meat and his family owns a restaurant that’s a monument to eating meat, he’s livid and doesn’t know if he wants anything else to do with Tommy.

But then Guy’s life gets crazy—his dad’s paranoia blossoms into violent dementia, Guy gets arrested for picketing a doggy mill then he winds up in even more legal trouble. When Tommy sticks by him through all his problems and does everything he can to help him, Guy wonders if he’s been too militant and narrow-minded. Perhaps he can learn to live with people who have opposite views.

Ready to die to protect the poor, abused animals being murdered at this slaughter house daily, Guy Rogers held his picket sign high and proud. He raised his voice and chanted with his animal rights activist group, “This little piggy won’t go to market.”

The business’ owners shouted at them to leave. Would-be customers growled at them and tried to cross the line. But every time someone tried, Guy got in their face, growled and bared his teeth. “What gives you the right to slaughter innocents?”

A man wearing a baseball cap and chewing on a piece of straw stomped up to him and thrust an open Bible into his face. With exaggerated emphasis he stabbed his finger at a passage. “Read the Bible. God gave us animals to eat. Just look at Deuteronomy. It says ‘Every moving thing that lives shall be food for you. And as I gave you the green plants, I give you everything’.”

He looked pointedly at the man’s protruding belly under his faded plaid flannel shirt. “I know He told you not to be a glutton, either. Get out of my face, man. That verse says ‘every moving thing that lives’. Does that mean you’re gonna start eating your fellow human beings? Huh?”

“Uh, no. It doesn’t mean that! That’s disgusting!” The carnivore tugged his hat lower over his rheumy eyes and scowled.

“What’s disgusting is eating living creatures that can’t defend themselves. I tell you what. You go out and fight a lion barehanded, and if you win, you can eat him. If he wins, he can eat you. Now that’s fair.”

“You’re the pathetic one, eating innocent creatures that can’t speak up for themselves.” Guy puffed up in pride. Vegetarians like him ate well-balanced diets with plenty of protein that never had a face or a mother. He could live with himself just fine.

“Guy! Get back in line before you get yourself arrested.” Jessica, one of his fellow activists, motioned him back, away from a couple of policemen inching toward him. She fancied herself a protective little sister and even looked like it with her fierce bulldog attitude.

Guy grimaced but pulled himself away from the one-on-one conflict. As much as his adrenaline was flowing, and he did want to deck the guy, violence wasn’t the answer.

“You’re so brave letting a little girl tell you what to do.” Mischief danced in the antagonist’s eyes, and he clenched his fists at his sides.

“You’re not worth wasting my breath.” Guy turned to his fellows and commanded, “Lay down in front of the entrances. Don’t let anyone through.”

A policeman rushed up and got in his face. The man’s eyes were mere slits of fire. “Do that and I’m arresting you.”

Backing down wasn’t in Guy’s vocabulary. To make his point he lay spread-eagled on the ground. Daring him, he sneered at the official. “I do what I must. You do what you must.”

The policemen rolled him over roughly and handcuffed him. “You’re coming with us, funny guy.”

Guy’s dad, Glen, bailed him out of jail with a furrowed brow and a crinkled nose. As he stuffed his wallet into his pants’ pocket, he sniffed. “If your poor mother was alive, she’d be bawling her eyes out at this shame. Why can’t you learn to live and let live? If people want to follow the Good Book’s teachings and eat the food God gave us, you shouldn’t go around sticking your nose in their business.”

Guy rubbed his aching wrists the handcuffs had made raw. Then he swallowed a deep breath that hurt his lungs as he followed his father to his beat-up van. “Look who’s talking about live and let live.”

“It ain’t natural for men to love men, to sleep with men. He intended for you to meet up with a good woman and give me some grandchildren before I die. Now don’t be waiting too long. I want to be in good enough shape to enjoy them.”

Reviewed by My Reading Addiction

First off, I want to say that i gave this book 5 stars. I absolutely loved it. This isnt the typical m/m romance and thats was makes this even better. The author did a fantastic job with making the men...

I liked the premise of this book - which for me was whether attraction was strong enough to overcome a whole raft of issues thrown in the way of a potential relationship. And those issues came thick and...

Share what you thought about Business or Pleasure and earn reward points.

From looking online, I see that you have been writing books for over 10 years, do you still enjoy writing now as much as your first book?

I’ve been writing since I was six years old but I’ve been published since 2000. Yes yes yes!  I still love to write.

Do You Really Want To Be Fed To The Sharks?

Not only am I a writer but I’m a reader. Reading is one of my favorite pastimes and I devour hundreds of stories a year. Often I catch myself wishing my life was even half as interesting as those of the heroines. Then I put on my writer’s cap and scream noooooo!!!

Do I really want to be like one of the heroines from the books I read or write? No way in hell!