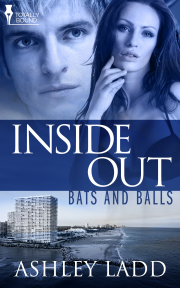 Book 4 in the Bats and Balls series

Although Erica used to be Eric, it's Trey who's twisted up and feeling inside out when he finds out his former lover is now a very beautiful, sexy and infuriating woman.

Erica Metzger loves being a woman no matter what most of the world thinks. Although life is much better as a woman, she still faces obstacles. Her former gay baseball league doesn't want to play with a woman because they're afraid she'll get hurt. The women's team isn't an option either, so she can't play the game she loves. And she's afraid her uncle will disown her if she tells him about her transformation.

She's mortified, however, that she crawled into a bottle and threw away Trey, the love of her life, rather than reveal her real self and confide her innermost desires. When the game they both love throws them back together, she doesn't like it but can't blame him that he doesn't trust her and is turned inside out with mixed emotions.

Erica Metzger felt funny being back on her old baseball field after a four-year absence. She itched to play, not merely call balls and strikes behind the home plate. Unfortunately, since her change, she was no longer welcome on the league.

Her palms grew clammy. Her heart sped up every time she saw a familiar face. When she’d been told she would be officiating for Trey’s team, ‘Doggy Style’, she’d almost backed out. Then she’d figured most of the guys would have moved on after four years in a place as transient as South Florida, Trey Kincaid included. Besides, she wasn’t ashamed of who she was. And it was doubtful they’d recognise her—she wore an umpire’s mask. They’d known her as Eric. Also, she’d had surgery on her vocal cords to make her voice feminine.

She winced at the thought. Inside, she’d always been Erica. Since age three, she’d known her outer body didn’t match her inner. She’d longed to play with Barbie dolls, wear tutus and take ballet, and paint her nails pink. Instead, she’d been given trucks and anthills, snakes and other creepy, gross boy things. Only on the baseball field had she felt at home.

Ironically, the sexual reassignment surgery that made her dreams come true also made it difficult to play ball. Adult women and co-ed teams only played slow-pitch in South Florida, which bored her to death. Therefore, she umpired until she could convince a decent team to let her play. And so here she was.

When Doggy Style’s coach Clay stomped onto the field, wearing his usual glowering expression, her skin crawled. He was all about the game but treated his players with as much tact as a hungry alligator. Less actually. And he had the personality of the rusty chain link fence penning in the fields.

Even when he’d been on her side, he hadn’t been friendly. She wondered what had happened to the man to make him as grouchy as a lion with a thorn in his foot. A lost love? Lost fortunes? Lost dreams?

She couldn’t imagine he would suddenly turn into her best friend much less a pleasant adversary now she was the umpire. Didn’t everybody hate the umpires? Sometimes even the other umpires?

The closer he came the more her spine stiffened. Not eager to be ridiculed by the jerk should he recognise her, she pulled her mask securely over her face. She made haste to join Grover, the other blue assigned to the game, who was putting on his gear on the far side of the field.

As she approached him, Grover stroked his piebald goatee and glanced at the players. He grinned wide enough to show several missing and broken teeth and to make his big ears protrude even further. The bottoms of his slacks were always tattered and the collars on his shirts yellowed. But he had a winning grin and a twinkle in his slate grey eyes that drew people to him.

“What’s a pretty young thing like you doing hanging out with a bunch of gay guys? You won’t find a straight man around these parts.”

Overwhelmed by memories of Trey—the man she’d met and played with here when she’d been Eric—she gulped. She still yearned for him in her dreams and being here was only going to give them more fuel. However, she bit her tongue and pushed the images to the back of her mind. They belonged to another life, a different person.

Share what you thought about Inside Out and earn reward points.