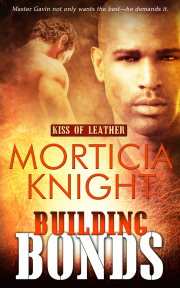 Book 1 in the Kiss of Leather series

Master Gavin not only wants the best—he demands it. When he meets Kyle, he assumes that part of the builder’s reticence to share anything personal with him must be due to his experiences with an abusive former Master. Not one to back down from a challenge, Gavin determines to break through the walls surrounding the beautiful man he can’t get out of his mind. He’s hopeful that once he convinces Kyle to sign an initial contract, Kyle might be the first sub to open up his heart.

“Thanks again, Marshall. This is going to help out a lot.”

Kyle glanced up at his friend of over ten years. Marshall wasn’t any taller than him, but Kyle had a tendency to keep his eyes lowered. It helped to control his annoying tendency to blush at the slightest provocation.

When Kyle had worked for Marshall’s dad—a house flipper who’d always needed a good carpenter on hand—Marshall had burst into Kyle’s life one summer on a break from college. Despite having completely different personalities, they’d immediately clicked. Once Marshall had graduated, he’d settled in North Hollywood, just over the hill from Los Angeles and Hollywood, and not too far from where Kyle had lived most of his adult life. Marshall had stopped by Kyle’s condo to give him the news that he’d gotten him some work on the side.

Marshall busily texted who Kyle assumed was one of his many friends and—or—admirers, his fingers flying over the screen. No doubt the social dynamo had plans for the evening. If Marshall had a shift at the trendy Galaxy Bar, where he not only bartended but possessed the title of mixologist, he probably wouldn’t have been nearly as excited. Kyle watched in amusement as every inch of his twinky body threw itself into the task of communicating with the mystery person on the other end of his phone. The way he bounced and twitched and swayed was like some sort of dance where only he could hear the music.

If I even had a tenth of his spirit, his outgoing personality, I probably wouldn’t be so lonely.

Kyle didn’t want to take it to the next level and add ‘boring’ to the list, but it was difficult not to. His closest friend never seemed to be without plans or a host of people wanting to be a part of those plans. Everyone craved Marshall’s company—he was the proverbial life of what seemed like a never-ending party. Kyle was just…Kyle.

At last Marshall’s fingers came to a halt, as if they’d become too tired to continue.

Kyle couldn’t help but chuckle. Many of their conversations were carried out in the same way. It was difficult to keep the attention of a shooting star.

“I was telling you again how much I appreciate you suggesting me for the contract at your friend’s club.”

Kyle worked extra hard to keep his tone and expression impassive. He’d be in trouble over the next few months otherwise. He had no idea how all the Doms and whoever else he might have to interact with would treat him. In his terrified imagination, they’d spot his vanilla ass from a mile away and maybe not want him to build any of the equipment for their club after all.

If I didn’t need the money so damn bad… “That’s a relief. I was kinda worried about that.”

Marshall snorted laughter then jostled him with his elbow. “You’ll be fine, you idiot. You’re an outside contractor, that’s all. You’re building the shit, not demonstrating it.” Marshall grinned with an unsettling leer. “Although what I wouldn’t give to see that.”

“Marshall…” Kyle needed to make it clear up front that he couldn’t be the comedy relief for all the Doms and subs at Kiss of Leather. “You didn’t tell Josh… I mean, nobody knows…” He bit the inside of his mouth reflexively, a bad nervous habit he immediately chided himself over.

“Hey.” Marshall furrowed his brow, his expression as serious as it ever got. “Don’t stress, hon. It’s one hundred percent professional. I didn’t say anything one way or the other about you other than you’re reliable, easy to work with and have a fast turnaround. No comments on whether or not you’re in the lifestyle. All I did was show them the spanking bench and the suspension scaffolding you did for me, and they were crazy impressed. I also told them about the additional pieces you did for the other guys I hooked you up with, and they’re sold.”

Kyle almost choked getting his words out. “Hooked up? You literally said ‘hooked up’?”

“Would you relax.” He shook his head. “When Gavin comes over, I know you’ll have no problem sealing the deal with him.” Marshall smiled, biting his lip as if recalling a particularly delicious memory. “Josh was especially surprised that I had my own equipment. Subs don’t usually provide their own bondage furniture. But when I play, I want the best. None of the Doms I go to have anything as good as your pieces.” He sighed dramatically. “If I had more money, I’d build a huge dungeon and force all the Doms to come to me.” He wrinkled his nose. “Except those guys don’t want to be told what to do—or where they can do it.”

Kyle had stared at the floor for most of Marshall’s speech. Once he’d gotten to the part where Marshall had complimented him, he’d trained his gaze right back on the white Berber carpet he hated so much. He lifted his head. “Uh, I wouldn’t know what Doms would or wouldn’t do. But, shit. You really said all that stuff about me?” Sure enough, the heat crawled up his neck and into his face.

“I seriously can’t thank you enough. I’ve already blown through my savings the last three months making up for Roger’s part of the rent. There was no way I’d be able to pay it otherwise. Especially since…” He shrugged.

It was so fucking embarrassing. Because Roger’s job as a lawyer had paid so much better, he’d handled two-thirds of their three thousand dollar a month rent. Kyle had been in charge of the household chores, the shopping and cooking as the remaining part of his contribution.

“So how much longer do you have on that lease?”

Kyle rubbed his forehead, screwing his eyes shut. He still had a hard time believing any of it had happened. “Almost nine months.”

Marshall frowned. “Wait. How long of a lease was it in the first place?”

Kyle let his head fall back, staring at the vaulted ceiling of what was now his incredibly overpriced condo. Roger had fallen in love with the newly built luxury unit in what had seemed like mere seconds before he’d then fallen in love with some guy he’d only just met at their housewarming party. It had been so bizarre—he’d still been uncertain as to whether or not it was some sort of joke even as Roger had been carrying boxes of his stuff to the car.

Roger had graciously left behind his hideous designer furniture ‘to make up the difference’ on the rent. From Roger’s skewed point of view, the household items cost so much more than the remaining amount due on the lease that it’d been a fair trade. Unfortunately, though, the leasing company wouldn’t take a postmodern dining set to cover the rent. Kyle could’ve taken Roger to court, but between not being able to afford an attorney and Roger being an attorney, it had seemed like a futile effort. He also hadn’t wanted to waste any more energy on one of the worst moments in his existence, so he’d decided to suck it up and move on with his life.

I really loved this book and am looking forward to reading the series as it is issued. There is just something in the way it is written, in the bond between the two men which works perfectly. I love th...

Oh, I adored this D/s relationship. Kyle is adorable beyond belief, while Gavin is sex on a stick. I loved the way the author wrote all the beginning training for Kyle in such a wonderful and real...

Share what you thought about Building Bonds PRINT and earn reward points.