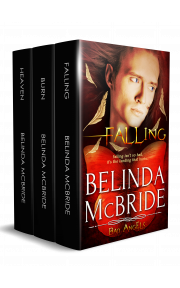 Falling isn’t so bad. It’s the landing that hurts.

Just what exactly happens when an angel goes bad?

Stripped of his voice, his memories and his divinity, Rion Hunter falls to Earth in a fiery blaze. After crashing into a muddy sheep pasture in Scotland, the disgraced angel finds himself face to face with an unlikely rescuer—a Sidhe-born farmer named Rex.

Rex finds himself rapidly falling for the beautiful angel, which can be risky when the object of your affection just might be psychotic. And if that isn’t enough, the men find that they’ve come to the attention of a ravenous succubus who has developed an appetite for Scottish farmers.

Following an auto accident, Rex Clark lays near death in the rocky wilderness of the Trinity Alps. Just when it appears that things can’t get worse, she shows up. Anahita…the succubus. She’s been his frequent companion, and the bane of Rion’s existence, for well over a century. But it seems that this time she’s come to help.

From the frozen villages of the Inuit to the cities of America, Dr. Noemi Gastineau has seen it all. When a fallen angel shows up at the reservation clinic with an injured Sidhe, Noemi takes everything in stride. Yet within hours, she’s swept into an enchanted world she never imagined existed.

So why are the men so temptingly familiar? And why is she suddenly so afraid?

A fallen angel, a Sidhe, a human and a succubus. Never mind the demons, these four are about to catch fire! The question is…who will survive the burn?

After being trapped out of space and time, Dr. Noemi Gastineau finally discovers her true nature and the amazing destiny that awaits her. However, danger surrounds her on every side. A rogue angel, an insane nymph and a wily demon would be enough for any woman to deal with for one day. Unfortunately, Azrael, the Angel of Death, is now on her tail, too, and he’s one of the good guys.

How’s a succubus supposed to get any quality time with her men when the whole universe is out to get her?

Reader Advisory: This book contains M/M, MF and M/M/F scenes as well as the use of a tail.

How does one describe the sensation? How does an angel process the horror of being cast out, thrown from the gates of Paradise to plummet through the heavens? How can a fragile body survive the horrific, bone-shattering cold, the agony of fire, burning and reaving the flesh from bone?

Kokabiel, the Star of God, was now a fallen star, blazing through the heavens, his soundless screams ripping through the fabric of the universe. Through the void of time and space, his cries echoed by the screams of others who were as unfortunate as he.

He did not know the nature of his crime, only that he’d been cruelly betrayed, abandoned by those he loved and trusted. He had been powerful in the celestial realm, but was now helpless here in the thin, frigid air of the blue planet below.

He hurtled and tumbled, his magnificent wings unable to gain purchase in the insubstantial atmosphere. He blazed with a glorious white light as he streaked through the sky. Again he screamed in agony of the body, anguish of the soul and deathly fear of his fate. Then he slammed into the Earth in an explosion of fire and steam and soil, his skin and flesh seared away, every bone in his body ground to powder.

Kokabiel lay deep under the surface of the Earth, where he remained for hours and days and years until one morning he emerged, whole in body, but damaged and tainted in mind and soul. He burrowed his way through the mud and ice of the Earth’s crust, emerging from the rich black soil in an unwitting parody of birth.

Naked and filthy, he sprawled on the new spring grass, chest heaving, bewildered by the colors and shapes he saw, confused by sounds that filtered past the mud in his ears. Strange animals surrounded Kokabiel, ignoring him as they grazed in the field. Creatures wheeled through the sky overhead, borne on feathered wings, much like his…

He twisted, eyes wide in horror. They were gone. Burned away. Only charred stumps remained where his wings belonged. Panic gripped his heart and he lurched to unsteady feet, once again searching for the wings that he felt, yet were not to be seen. He opened his mouth to cry out, but only a coarse sound emerged from his throat, bursting past his mud-coated tongue.

Kokabiel started to flee in panic, but clumsy legs betrayed him, spilling him to the muddy ground where he lay panting, the crippling fear too much to fight.

“They’re still there, lad. The wings’ll grow back soon enough, now that you’re back in the light.”

Kokabiel rolled over and located the voice. He scrambled on his backside, trying to distance himself from the threat. The creature looked familiar—two legs, two arms, a good-natured face under a mop of dirt-brown curls that glistened with silver. He couldn’t understand the words the man spoke, but the meaning registered in his brain.

“Ah… It’s all right. You laddies are always near daft once you wake up. Don’t know if it’s the fall”—he glanced at the heavens, then looked down at the soil—”or if it’s the landing. Either way, you angels got it rough. Took you longer than most. You must have fallen farther.” He grinned, exposing a roguish smile. “I’m Reux. That means headache.” He chuckled at his own words. “Needless to say, I don’t use it often. You can call me Rex. That means king. Better name, if you ask me. Now, what do I call you?”

He moved a little closer, and Kokabiel eyed the creature nervously, for this was no human nor was it an angel. Rex looked like a man, but through eyes blurred with fatigue, Kokabiel saw something else entirely. Something manlike and charming. Something magical. Surely this was no demon?

Rex moved closer, squatting down on his haunches, resting his arms on his knees, long, slender hands hanging loose. His legs were clad in worn fabric breeches. A woven cloth shirt hung loose to his mid-thigh. Scuffed leather boots rose to his knees. The creature’s eyes were no color Kokabiel had ever seen, brown mixed with green and gold, harmonizing with his richly colored curls and warm brown skin. The forest green of his eyes echoed the rich green of his shirt.

An ornate amulet dangled from a worn leather cord around his neck. Magic resonated from the object.

“You’re a pretty one, aren’t you? That’s going to be a problem right quick. I’ll have to keep you hidden from the lassies till you’re on your feet. Can you tell me your name?”

Rex’s voice was mesmerizing, lyrical. Kokabiel felt his heart settle, his fear beginning to recede. Panic rose once more with the realization that knowledge was flooding into his brain. Colors had names. Words had meaning. 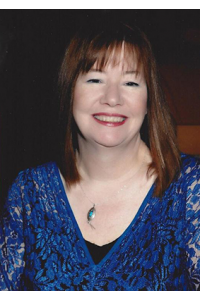 Share what you thought about Bad Angels Box Set and earn reward points.