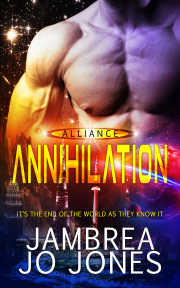 Book 5 in the Alliance series

It's the end of the world as they know it…

Ricardo Clark is ex-military working a nine to five job on Earth, a planet that was almost wiped out by the big flood of 2050. The world was changing and trying to regroup under a new government called the Alliance. For most it was business as usual. That is until the old government tries to take back over.

Gilliland Carter was tired of living on the streets. He took a job at a bakery hoping to put some normal back into his life. There was no need for his kind anymore, an undercover cop. The Alliance had a lock down on things and if you weren't military, you weren't needed. He didn't exactly have the look of someone who'd fit into the soldier lifestyle with his tattoos and piercings.

Ricardo and Gilliland take a journey neither of them were prepared for. It will bring them to the brink of death, but can it also bring love?

I really enjoyed this story.

I LOVED the ending. I loved how it was not close to what I was expecting and how it tied things up nicely and really set the stage for the next book.Read more reviews

Share what you thought about Annihilation and earn reward points.