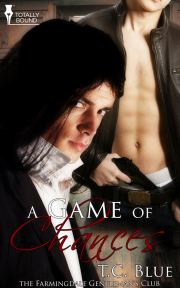 A Game of Chances PRINT

Book 1 in the The Farmingdale Gentleman's Club series

Two men, too many secrets, and even more situations trying to keep them apart. Can love really conquer all?

A meeting brought on by seeming coincidence throws Marcus and Tanner together. After becoming friends, certain truths are revealed, leading to feelings of betrayal as well as a degree of danger.

Tanner has more secrets than one man ever should, not the least of which is that he's an operative for a gray-ops organisation that's something of a family business. Sharing even that much information could kill more than just his friendship with Marcus. When one misstep on Tanner's part plants possible danger in Marcus' lap, he does what he needs to do.

Marcus doesn't know that Tanner is after the man Marcus used to date, but he for damned sure finds out, and that's just the start of things. When a computer disc and men with guns come into play, Marcus has some decisions to make. Like whether he can forgive Tanner for making him love a lie… and how far Marcus is willing to go to secure his own happiness.

Reader Advisory: This book contains scenes involving weapons and violence, and some instances of drug/alcohol abuse. There are also references to paedophilia, non-consensual sex between an adult and a minor, prison gang-rape, and murder.

The light on Marcus Duncan’s old-fashioned answering machine blinked steadily, which was just annoying because he knew who it had to be.

He didn’t know why his ex, Steven, would be calling him, but there was no one else who would—not with Steven getting their friends in the split.

A loud, irritated sigh left him, even as he reached out and pressed the play button, his finger staying there for purposes of immediate deletion. He still didn’t want to hear Steven’s voice, not really. Not even now, two months after he’d kicked the bastard out of his—their—old place.

“Hey, Mar—” the voice started, and Marcus smirked at the beep the machine made when he pressed the button. If only it were as easy to erase the fourteen months he’d wasted on Steven in the first place.

“Sorry, I got cu—” the same voice, and this time Marcus snarled just a bit as he repeated his earlier motion, skipping past the message that was obviously a continuation of the last.

“Got cut off?” he spoke to the machine, feeling just a little bit like an idiot, but also…not. A guy needed to vent sometimes, Marcus figured, even if there was nobody there to hear him. “You’re lucky it’s just your messages I’m cutting off, asshole.”

And that was true enough, even though any action that was more proactive than just putting out Steven—along with his assorted random, but very expensive crap—would have landed Marcus in jail. Marcus still would have liked to have—but that was mean. And petty. And would have implied that Steven had had entirely too large of an impact on his life.

Marcus wouldn’t give the jerk the satisfaction.

One more message from the jackass was skipped, and Marcus’ finger was already starting to press the button again before he realised it was a different voice.

Different and… Oh, just listen to that little bit of drawl. It was charming, really, though Marcus would never say so out loud. Charming wasn’t the sort of word he generally flung about, after all.

“Um, hey. I don’t know if… Look, this might be a wrong number, but I’m trying to find an M. Duncan who used to live at 2437 Endwhisle Place? If… Okay, if this is the wrong number, then never mind, but if it’s not, um…I think you forgot to file a change of address with the post office and I’m getting all sorts of mail for you. Some of it looks like it might be important, so… Um, okay. If this is the right M. Duncan, call me back at…”

Marcus scrambled for a pen, finally digging one out of the pile of receipts and scraps of paper on the table by the phone. Then he had to start again, skipping Steven’s messages a second time so he could copy down the number.

The guy hadn’t left a name, but Marcus supposed it didn’t much matter. He apparently had whatever mail had slipped through the cracks at the post office, because Marcus clearly recalled filling out the stupid form. And giving it to one of the clerks, too.

He’d been getting mail at his new place, but that didn’t mean the postal service couldn’t have screwed up a time or two, and who knew how they managed to find every piece of mail for one single person anyway? Marcus surely didn’t.

And hell, if even one envelope was important, Marcus figured he owed the guy. It would have been so much easier to just throw it all away.

He almost picked up the phone, but his stomach rumbled, reminding him that he hadn’t eaten since breakfast. Things had gotten kind of crazy at the restaurant bar that afternoon, so Marcus hadn’t had time for lunch, which was possibly ironic, and…well, right at the moment, there was a pizza out there just calling his name.

Or maybe Chinese. Marcus wasn’t sure. Probably whatever was closest. He wasn’t fully certain of what that was, though he’d been in his new place for going on three weeks.

He’d know soon enough, he figured, after quickly exchanging sharp black pants for tight jeans, dress shoes for sneakers, and his sweat-stained T-shirt for a similar one that was definitely clean. He might not have loads of free time, what with the hours he worked, but Marcus always made sure to do the laundry at least once a week.

It was one of the things Steven—with his entirely dry-clean-only wardrobe—had always complained about. He’d been of the opinion that Marcus should have spent those two hours catering to him. He’d wanted Marcus to hire a service, for God’s sake. As if doing his own laundry was a sign that Marcus was inferior or something.

Well, maybe he was, but not to Steven. And doing his own wash was necessary, not to mention a skill that had taken Marcus months to get right, even with the advice from his uncle’s housekeeper—and hadn’t Connie gotten a laugh from that?

Marcus had never even seen a washing machine until he’d been twenty-three, and being able to handle his own day to day needs made him feel accomplished. Normal. Not that Marcus had ever bothered to explain that to his now-ex, which sort of implied that they really had been just as badly suited to each other as Marcus had feared, just a few months in. But he’d stuck it out, mostly because he’d never been good at being on his own. He was starting to get good, though—more comfortable with his own company, anyway.

None of which was bringing him any closer to being fed, Marcus reminded himself with a wry grin as he scooped up his keys and headed out of the door.

This story is by far the best thing I've read by the author and I'm amazed at how much her skill has grown with each book...A Game of Chances was a roller coaster of a story...I am thrilled that there...

Exciting twists and turns and page after page of angst make A Game of Chances a riveting tale of deceit and danger.

Share what you thought about A Game of Chances PRINT and earn reward points.