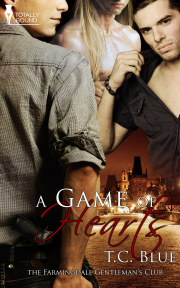 A Game of Hearts PRINT

Book 3 in the The Farmingdale Gentleman's Club series

A Game of Hearts

What's the difference between a fling and a relationship? Three spies are about to find out.

Morgan and Simon are settled and happy together, or as much as they can be given their high-octane positions as operatives of the Farmingdale Gentleman's Club. So why are they both having unexpected longings and thoughts about their teammate, River? Sure, he's gorgeous but he's a bit of a player, and neither Simon nor Morgan are willing to risk their relationship on a fling.

Try as he might, River can't seem to resist his attraction to his team leader, Simon, or Simon's mate, Morgan. He also can't quite let himself intrude on their relationship until he receives a rather unique offer from the two men. It's a fairly casual arrangement, but when things get rocky on a Game in Prague, things come to a head.

Can three very different men find a way to make love work? Easier said than done, especially when the past seems determined to complicate the future.

Reader Advisory: This book should be read in sequence as part of a series.

a trio that can't be beat. They're sexy, dynamic, protective and can seriously kick ass. What's not to like? And did I mention how hot they are once they get into bed? Get out the ice...

Share what you thought about A Game of Hearts PRINT and earn reward points.