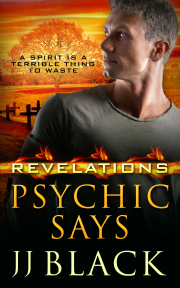 Drama, danger, and sexual tension weave through Psychic Says.  This is an exciting blend of romance and mystery for the second installment in the Revelations series.  Medium Stephen has legitimate reasons for rejecting his Alpha wolf.  Their difficulties make for a great battle of stubbornness verses patience.  As for the deaths in the pride lands, a dark element brings another layer to an already bold plotline.  There’s no end to the trouble Stephen and Maddox face in Psychic Says.

Fabulous intrigue that I never saw coming made this book even better than I had hoped. The smoking hot, sexy alpha, and he and Stephen's hijinks in between the sheets was definitely worth reading (twice). There were a number of things I was disappointed with but overall I enjoyed this book. Thank you, JJ.

The story starts off with a bit of a deceptive encounter, because it is only the tip of the iceberg in regards to the spine tingling sensations that are caused when Stephen is sent to investigate some mysterious deaths in the local cougar pride. I got chills as the expectation built and the danger closed in. The scenes are full of vivid descriptions that make it easy for the readers to become caught up in this excitement so much so that I could practically feel the evil radiating from the bad guy as well as the emotional turbulence that flowed from the pages...Stephen and Maddox's story was bursting with feeling and the author did such a great job of bring it all to life that I was completely lost in the story until the very end. But it was more than that because the author incorporated some very interesting traits to her characters, even the evil one, that I just had to know more about them.

I enjoyed reading Psychic Says. It was fun and full of action and mystery. I loved the shifter dynamics and learning about magic users. I loved watching Stephen learn about himself and his powers and I loved the way his growth was vital to resolving the plot. It was interesting how the author tied the magic forms together not only with themselves but with the spirits they called upon.  Stephen and Maddox’s mating was intense. The instant factor was easy to understand because these men had a history that was well explained. I did like that while many parts of the mating were instant, there was still drama and misunderstandings.

I liked the story build up and the bad guy was actually interesting. I wish there were more scenes with just Maddox and Stephen so I’m hoping this won’t be the last book about them. They’re a really interesting couple. I liked that Stephen wasn’t some hunk in his twenties. He was actually an older man while Maddox was the younger one.
I’m looking forward to book 3.

Recommended to fans of paranormal, supernatural, and magic urban fantasy stories. There are Shifters, demons, and of course, a Psychic as the hero.