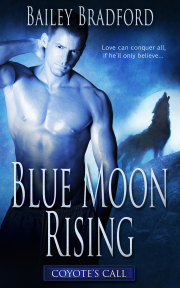 Share what you thought about Blue Moon Rising and earn reward points.

The characters are strong, compelling and grip the readers by their hearts as they draw them into the story and the fast paced, smooth flowing plot ensnares readers with suspense, excitement and romance. The well written scenes and detail makes it easy for the reader to become immersed in the story while the intriguing events ensure that there is never a dull moment. Bailey Bradford has such a gift in making her characters come to life, so much so that I tend to get caught up in their story and I'm never ready for my visit with them to end and in the case of Coyote's Call series.

Review by Sexy For Review

Blue Moon Rising was an investment in reading. The world building created by Bailey Bradford was fresh and original. Shifters who have lost their natural way, can’t shift, and need to discover their inner beasts~ all a part of Coyote Call series and the innovation which Ms. Bradford has laid upon us.
I adored Roman and Abraham and Ms. Bradford’s characterization of the men, the roles each assumed in their relationship, yet the need to keep us guessing.
This brave and sometimes scary new world was full of passion, angst and love. A world that Bailey Bradford opened for her characters and her readers.

I adored the way Abraham was devoted to Roman and wanted him to be safe. It was so sensual how Abraham gave himself over to Roman in bed... Roman and Abraham had already met when the story started but I enjoyed the hack out of how they got together. I was a little surprised at some of the twists and turns in the story. However through it all you can see how good they are together. They are going to make it long term and have a solid relationship that’s going to last. The way they support each other and take care of each other is lovely to see.

I think the series is just getting better with each book. I’m not a huge fan of shifters in general, but Bailey Bradford writes just the flavor I like. The characters don’t follow a formula like so many others do, so they stay interesting even if the basics are the same. My favorite thing about the whole book was when the two got down to being mates and the the sexy times started. And not just for the sexy times believe it or not, although I will get to that. What I liked was the playful banter between them and the honesty that came from it.

A wonderful, sweet addition that I enjoyed immensely. It was time for Roman to get some happiness, and for both men to find what their souls needed to survive. Thank you, Bailey!

This is by far my favorite Bailey Bradford series, and I’m so glad to see more books coming along in it.

I highly recommend it to fans of the series, but you need to start at the beginning to really understand and appreciate this book.

Love the pace of this book, the way the author doesn’t give the characters a chance to wallow in self pity, or self doubt. The way we all band together to fight the fight and save the day.

Blue Moon Rising does a nice job of balancing the romance between two injured men, with quite a bit of action and suspense. While we watch Roman’s confidence grow in himself as a shaman and as a man, Abraham’s recovery from his injuries as he tries to find his new purpose in life, and the two men begin to build a relationship, enemies from their and the pack’s past return seeking vengeance. The Vonheimers target Abraham multiple times over the course of the novel until everything comes to a head with a shootout that may or may not be the end of their troubles. I loved the blue moon ceremony at the end of the book. Granted it was hot as heck when Roman’s mating instincts took over, but it was also great to see him finally able to shift because I knew that was the final barrier for him to overcome his reservations about being the pack’s shaman. Finding out there’s another bear shifter in the mix was cool, too. Blue Moon Rising was another enjoyable addition to the Coyote’s Call series and I look forward to reading whatever Bradford releases next.

I loved that they both are wounded heroes but the parts that they think are broken about them are really what bind them together. They each bring something beautiful to this relationship. I also liked how Ms. Bradford made this a very emotional and angst filled read. I felt very connected to the characters and wanted them to find their peace and love. I would love to read much more from this series. Even go back and read what I have missed. This is the kind of story that stays with you long after you finish reading it. One for the keeper shelf.