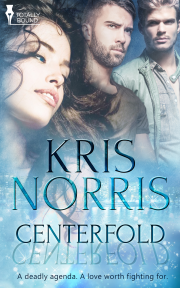 Share what you thought about Centerfold and earn reward points.

Holy cow! For a small little novella, Centerfold sure packed quite a punch! It was sexy, suspenseful, and so much fun to read. I loved the characters. Scarlet is a bad-ass heroine that is quick to take one for the team... Your imagination can run wild with that statement. *wink* I loved how quickly Roman and Aiden surround her and bring her into their relationship. The sexy time scenes were scorching hot and the chemistry between the three of them was off-the-charts. Sizzling hot! Let's push the sex aside for a minute to focus on the suspense element of Centerfold. I was quite surprised with how it played out. It was strong enough to keep my attention and kept me guessing for the most part. For the couple hours I spent inside the world of Centerfold, I was in sexy suspense heaven.

Scarlet, Roman and Aiden are a very HOT trio. I really enjoyed Scarlet’s sassy attitude – she was tough, but soft at the same time. She knew how to take care of herself and was able to play with the best of them. This had great twists and turns – I loved the mystery within the story. It helped create more depth to each of the characters. While I didn’t really like Roman all that much, in the end, I forgave him.

I liked how Roman and Scarlet’s chemistry ebbed and flowed like a normal relationship. I wish I knew more about Aiden, but overall, these characters meshed well together. This book combined what I love reading: Sex, Mystery and a happy ending.

The story was fun and well developed. The sex, HOT! Great dialogue and a villain who isn’t revealed until the very end. There are clues and red herrings but it was fun to guess along the way. This story had it all. What I liked best were the characters themselves. I wish I knew how Roman and Aiden became a couple. These guys are both heavy on the alpha side and both happy to give an erotic spanking when opportunity presents itself. Let’s just say they’re a tiny bit obsessed with Scarlet’s posterior. But it’s sweet and sexy at the same time. They truly dote on her and I couldn’t help but love watching them engage.

This is a quick read for someone who doesn’t have much time but wants a story that is totally satisfying.

I like crime dramas. I have mentioned that before. Centerfold was actually a pretty good crime drama. Good drama. Throw in the kinky sex, and well... this about covers all the bases. Law & Order and/or Castle meets Miss Congeniality meets Hugh Hefner meets ménage and more. Like some kinky sex with your crime drama?

Centerfold is an intense suspense story, as well as a hot love story, with some twists that I did not see coming.  There were a few light hearted moments, especially when they were required to participate in sex games.
Showing Books 1 to 7 (of 7)