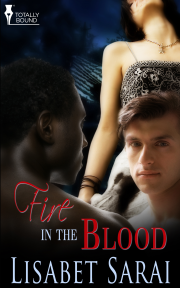 Fire in the Blood

In the heart of darkness, eternal passion burns.

Maddy and Troy hope that a care-free vacation in tropical Jamaica will re-ignite the passion in their five-year relationship. On a scenic mountain trail, Maddy's horse bolts and carries her deep into the jungle. Injured and lost, she is saved by a seductive giant of a man whose mere presence kindles unbearable lust. By the time she understands his dark nature, it is far to late for her to escape.

Bitter and alone, Etienne de Rémorcy haunts the forest around the ruined plantation of Fin d'Espoir. He has sworn to never again taste human blood, but when slender, raven-haired Madeleine begs him to take her, he cannot resist.

Troy is hugely relieved when Maddy makes her way back to their hotel after her ordeal in the mountains, but he finds her greatly changed—fiercely passionate in bed, restless and disturbed at other times. The tall, elegant stranger he meets on the beach hold the key to her transformation, and soon has seduced Troy as well. Even Etienne's most potent magic can't extinguish the fire in Troy's and Madeleine's blood.

The sky broke open. A savage drum beat in Maddy’s ears. She felt the thunder in her belly, new peals crashing long before the echoes of the last died in the hills.

The beast she hugged between her thighs tensed with each resonant boom. Damp leather bit into her palm as she struggled to control her mount. The horse reared, whinnying in terror. She clutched at the stallion’s black mane, barely keeping her seat as he tore off once again into the underbrush.

Branches whipped at her face, leaving stinging trails of pain. She squinted against the wind-driven rain, her soaked bangs and the gathering dusk conspiring to blind her. The horse galloped on, trampling a path through the dense Caribbean forest.

“Whoa!” she cried. “Help! Please!” The storm simply swallowed her voice. New thunder rocked the mountains. Rain hissed through the leaves, pricking at her skin like a thousand tiny needles. The horse crashed through the vegetation, its hooves churning up clots of mud that landed on her bare legs. Wrapping the reins around her wrists, she lowered her head to hide her face against the steaming, rain-slicked hide. Let him have his way, then. It was all she could do to hold on.

If only the guide had listened. When roiling purple clouds began to gather in the heights farther up the path, Troy had asked politely if it wouldn’t be better for them to turn back. The wiry, dreadlocked youth leading them had just grinned, teeth a brilliant white in his dark face.

“No problem, man,” he had laughed. “Maybe we gonna get a bit of rain. Maybe not. Either way, the horses not gonna have any trouble. These are rasta horses, man. They cool. Nothing gonna to bother these horses.”

Troy must be worried sick. If she could just convince the stallion to slow down, she could dig out her mobile. Right now, she didn’t dare let go.

The horse lurched and shuddered, plunging down a sudden slope. Maddy barely escaped, tumbling over his head. A broken branch ripped through her shorts and gashed her thigh. Lightning bloomed overhead. In the brief instant of brightness, she glimpsed ragged cliffs towering above them and a lush valley below. Thunder and profound darkness descended together.

The horse continued his downward rush. Desperate, Maddy clung to the saddle, her legs aching with the effort. It was all too easy to imagine herself broken and trampled on that rocky ground.

Impossible brilliance dawned, followed by a crash that left her ears ringing. Maddy smelled ozone and charred wood. An orange tongue flared on a nearby ridge, silhouetting towering trees before it was quenched by the downpour.

The ground became more level. Her mount picked up speed, splashing through a stream that crossed his route and showering her legs with water far colder than the rain. The underbrush thinned. They raced along through a natural tunnel formed by the branches arching overhead. Another lightning bolt crackled through the forest. It illumined what looked like a man-made structure, a few hundred yards ahead.

“Hello!” she yelled, trying to make herself heard above the din of the storm. “Anyone—please—help…!” She peered into the grey-green shadows. Had she been mistaken? The rain eased slightly. The damp breeze was redolent of smoke and growing things.

She must have loosened her grip. Lightning arced through the sky, followed by a crack of thunder that rattled her bones. The stallion froze, screaming its terror to the freshening wind. It rose on its hind legs, beating the air with its front hooves and dashing Maddy to the ground.

Ms. Sarai has a way with words and pens a tale that, though a little light on the romance, is a story of dark, intense love. Sexually, this story is very well written...If you like your romance edgy,...

Share what you thought about Fire in the Blood and earn reward points.