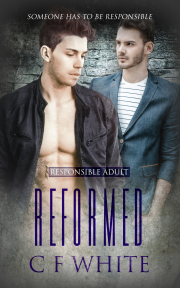 Someone has to be responsible.

Things are fine…until Dan begins his dream career as an English teacher at the local school and Micky, main caregiver to Flynn, is isolated in a village that only serves to remind him of his mother’s absence.

With Flynn’s health deteriorating and his needs becoming more complex, everything is tested to its limits and Dan seeks solace in a friendship with a fellow teacher, sending Micky into further turmoil.

After an accusation is leveled against Micky and it seems he’s slipping back into his old ways, he and Dan are torn asunder. To repair the rift, both have to accept responsibility—for life.

Publisher's Note: This book is the third and final book in the Responsible Adult serial and is best read in order.

Micky slammed his palm down on the bedside alarm to stop the incessant shrill loud enough to awaken the whole damn idyllic Welsh countryside. He scrubbed a hand over his face, collapsed into the soft pillow and tried to get a grip on his pounding heart. Closing his eyes, he hoped for at least another five minutes of solitude and drifted off into the comfort of dreamland, until the next loud blast made him bolt upright.

“Fucking hell.” Micky curled his hand into a fist to whack the clock that was too fucking insistent that it do its job well.

Fumbling along the buttons, he managed to switch off the electric drill sergeant and groaned. He squinted through the searing sunlight that always seemed far too low in the sky than it ever had been in Heathwood, possibly because it wasn’t blocked out by all the tower blocks in this part of the world. And, minus the high-pitched bleeps, the room was forced into an eerie silence. Like most mornings. Occasionally, the tweet of a bird fluttering past the open bedroom window, or the bleating of sheep and mooing of cows would welcome him awake. It could have been worse. He was getting used to it. Slowly.

He reached out to feel along the bed and met empty sheets, duvet scraped back in an almost perfect triangle and a dipped circle in the middle of the vacant pillow. An open book, spread out on the page it had been left at last night, perched on the night stand along with a pair of folded-up glasses. The sight warmed Micky, a little. Which wasn’t that much of a feat—it was early September and he was snuggled under a winter tog duvet. But still, the sentiment was there. Briefly. Until the loud scream from downstairs startled him.

He wasn’t given a reply. He listened, but the following, now deathly, silence dragged on. He kicked free of the duvet and swung his legs to bundle out of the bed. It was too sodding early for all this shit. Scrubbing a hand over his face, he trudged over to the wash basket piled high with dirty laundry and grabbed the nearest thing. After hopping into a pair of work-out shorts, he yanked open the bedroom door. The noise he was met by made him wish for the silence.

Another loud scream, one he knew belonged to his brother, pierced through the walls. Micky bolted out of his bedroom, across the corridor and rammed open the door to his brother’s room. Blackout blinds closed, bed unmade and no one in it.

“Flynn!” He stomped over to the adjacent bathroom and shoved open the door with his shoulder. Empty. Nothing. “For fuck’s sake!”

“No, no, no!” Flynn’s wails bellowed through the house.

Micky checked along the top floor. Five doors, each one shut. This farmhouse was too fucking big. Hide and seek had taken less time, and probably far less enjoyment, back in his two-bed mid-terrace house in the Heathwood suburbs.

Growling, he pelted down the stairs, scraping his hand along the banister, and skidded through the entrance hall, into the living room. He clenched his fists into tight balls at the sight. Curtains still drawn, with discarded toys and crayons littering the floor. Remnants of liquid and food stained the high-pile squared rug in front of the cast-iron fireplace. The fire that was roaring flames and absent of its gated guard.

Micky bundled over to the fireplace, careening around all the torture hazards. He grabbed a pint glass of water that had been left by the side and chucked it over the flames. The hissing and crackles only just managed to drown out his beating heart. Throwing the glass to the floor and coughing through the smoke and steam, he twisted on his bare feet and listened.

Scurrying off to the back kitchen, Micky ground his teeth at the spilled milk drenching the marble surfaces and the cereal box hanging precariously on its side, a victim of the early morning massacre. Spinning first one way then the other, he noticed the front door was unlocked. The heavy gust of wind from outside made it bang against the frame.

Micky darted out of the kitchen, stamping through the squares of Shreddies and grains of sugar scattered on the floor. Passing the downstairs toilet, he stopped short on hearing what he could only assume was a waterfall. He nudged the door open wider.

“Fuck, fuck, fuck!” Micky bellowed each curse word with renewed vigor as a flood seeped out from the porcelain floor tiles and trickled between his toes.

He skidded into the toilet and smacked down the silver tap to prevent more freezing water pouring into the over-filled sink and gushing onto the floor. He bounded out of the bathroom, almost slipping arse over tit, and trotted into the wide entrance hallway. The front door banged against the latch and Micky curled his fingers around the wood to tug it open. His skin pimpled in the chilly morning breeze and he shivered.

Swallowing down the tightness in his chest, he shoved his feet into the tatty trainers left by the door―making a mental note to buy some new ones later that day―and pelted out into the yard. Reaching the low-rooted apple tree, his heart pounded when his brother’s voice rippled through the valley.

His brother’s voice, no longer distant and more like it was returning to him through the dusky sunrise, made Micky pause. Squinting up the valley, he sucked in a vexed breath at the next thing he laid eyes on.

Flynn in his oversized pajamas, held against a man’s chest, pounded his fists and kicked his legs, screeching at the top of his lungs. His head shook from side to side, making the curls of his mousy brown hair flail in the wind. Micky hadn’t heard those wails for a long time and they drove through his bare torso and into his heart like a knife. Dan reached him and lowered his brother to the floor.

“We had an uninvited guest.”

Flynn launched at Micky and wrapped his arms around his waist. He trembled, sobbing into Micky’s bare torso, and Micky dug fingers into his scalp to keep him steady.

“Lucy,” Dan continued, waving a hand toward the house. “God knows how long those two have been up.”

Micky exhaled his held-in breath. He released some of the pent-up tension by nodding and caught the guilt flickering across his brother’s blotchy face. Micky crouched, removing Flynn from his waist, and grabbed the top of his arms to look directly into those mesmerizing star-burst-patterned eyes.

“What have I told you about letting people in the house?” Micky said, voice low. “After everything, Flynn! What the fu―”

“But it was Lucy,” Flynn sniveled. “She wanted to play.”

“Don’t worry.” Dan laid a hand on Micky’s shoulder. “I sorted it. Took Lucy back to her mum’s and Flynn, here, won’t be allowed to go see the Hugheses’ rabbits for a long time.”

Micky peered up. Dan seemed calm enough. He wouldn’t have known the first thing that had come to Micky’s mind at hearing those screams from his brother. Dan thought the threat was over. Micky knew otherwise.

Micky prized Flynn away from him. He gave his best stern-brother look and tapped Flynn’s back to usher him into the house. Flynn sniffled, pouted, kicked a few of the gravel stones on the ground and stomped indoors. He slammed the door against the wall and trudged up the stairs.

“Well.” Micky stood and rubbed his hands together to stave off the shaking. “Looks like you don’t need me, then.”

“I always need you.” Dan leaned forward and kissed him. “Best be getting in, though, I think you’re giving Mr. Evans a heart attack.”

Dan stepped aside, allowing Micky to see the elderly gentleman waiting across the road at the nearby bus stop. Micky held up a hand in a reluctant wave. Mr. Evans didn’t return it. He never did. He just staggered on his walking stick and glanced up the valley, waiting for the bus to make its first and, only, morning appearance.

“He’s a funny one,” Micky mused, walking with Dan into the house.

“Yeah,” Dan agreed. “Although, he does sometimes acknowledge me.”

Micky snorted. “That’s ‘cause you’re too fucking nice. Which you better rein in quick smart, or you’re going to get crucified today.” Micky held the door open for Dan to step through.

“And have you seen the state of the house?”

“Well, looks like you’ll have something to do today then, after all,” Dan replied. “After making my good-luck breakfast, of course.”

As fucking if. “There’s a fuck ton of cereal you can eat off the floor.”

Share what you thought about Reformed PRINT and earn reward points.