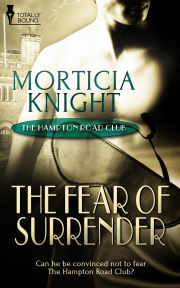 The Fear of Surrender

Master Thomas sees a submissive man aching for surrender. But can Linus be convinced not to fear The Hampton Road Club?

Linus never wants to return to Hampton Road after being attacked by a Master there. Even though he aches for the attention of Master Thomas—the one who he’d originally wanted—he isn’t sure he can ever trust another Master not to abuse him again.

Thomas is furious with himself for not protecting the beautiful young submissive whose company he’d enjoyed on a few occasions. He’s relieved that there have been some recent changes to help protect the men who offer themselves at the sadomasochism club. It’s about time to bring Hampton Road into the progressive age of the 1920s. Now that the new rules are in place, perhaps he can woo Linus into giving him a chance.

As Thomas goes out of his way to be kind to him, Linus wonders if he’s misjudged the Master. He’s still not sure if there’s a future for them. What if he never wants to surrender to another man? When he allows Thomas to teach him the joys of Dominance and submission, Linus discovers that he not only wants to surrender, he wants to be claimed permanently. If only Thomas’ old life doesn’t come back to haunt them and destroy their chance of being together forever.

Reader Advisory: This book contains scenes of figging and piercing.

Thomas leaned against the white sports car he’d purchased the year before when he’d lived in Santa Barbara. It was a 1925 Buick Convertible, and still looked as good as the day he’d bought it. There had been a new model out for ‘26, but he was more prudent than that. As a professional bookkeeper, he knew that the careful use of a dollar was essential to creating a secure existence. But a sexy motorcar was still a nice addition to that existence.

Crossing his arms in front of him, he remained on alert, scanning the surroundings of the Hampton Road Club from where he was parked in the long driveway. The three-story mansion, located in one of the richer areas of Pasadena, boasted elegant Tudor Revival architecture. He found it impressive, always had. It was the perfect setting for a gentlemen’s private sadomasochism club.

A slight breeze helped cool the warm spring night, but it remained nice enough to ride in his open vehicle. He checked his pocket watch, a bit on edge and more than a little curious about what was happening inside the club at that moment. One of the heavy oak side doors to the house flew open and he straightened. Anger rose up, increasing his tension as soon as he spotted the culprit bursting from the home. The scoundrel appeared in a great hurry to leave.

His desire to run over and grab the snake before giving him a good thrashing was almost too irresistible, but he’d promised Aaron that he’d control himself. As one of the Masters, fellow board member, and his dearest friend, Aaron had assured him that Cornwall would be dealt with then tossed out of the club for good. Thomas was there to whisk away Kenneth, Preston’s boy. It had become necessary to step in after it was revealed that Preston was keeping Kenneth as a virtual prisoner as well as abusing him.

He clenched his fists, nodding toward another good friend, Bruce. The hulking boxer stepped out of the shadows, blocking Preston’s path.

“Get out of my way, you oaf,” Preston snarled.

Bruce widened his stance, punching one fist into the other. “Talk like that’ll land you one in the kisser.”

Preston stilled. He straightened, almost as if he dared Bruce to sock him one. Thomas ached to get closer, to see what Preston’s expression might reveal. It had become much too clear from the Master’s recent behavior that he’d gone off the rails. Kenneth had rescued Linus from his clutches and the other Dominant men of Hampton Road had taken it upon themselves to rescue Kenneth. Banishing Preston from the club permanently was the final part of their plan for the evening.

“If you’re going to hit me, go on then and be done with it.” Preston’s voice was low, menacing. “I’ve had enough of this horseshit. But let’s be clear on one thing. All of you purported Masters may think you’ve won, but this isn’t over. It’ll never be over until I get my property back.”

Thomas winced. Preston had only ever spoken of Kenneth or treated him as if he was little more than a possession that he could do with as he wished. His words only served to reinforce that perception.

And there’s what he tried to do to Linus…

He’d sworn to Aaron—as well as Saul and Theodore—that he would behave. But that still didn’t stop him from wanting to rip Preston apart—to make him feel as afraid and vulnerable as he had made Linus feel.

Bruce stepped to one side to allow Preston to pass, but continued to glare at him, following behind the lunatic as he marched to his motorcar. As soon as Preston had stepped into the blue sedan then roared down the driveway to the street, Thomas relaxed somewhat. However, that didn’t answer his curiosity as to what had gone on inside while he’d been waiting in the driveway. Soon, his part in the evening’s scheme would come into play.

Thomas called his friend over. Bruce and his fellow pugilist, George, had relocated from Santa Barbara to the Los Angeles area with Thomas to join Hampton Road permanently. It had been about six months before and Thomas was glad Aaron had talked him into it. The men of Hampton Road were honorable and the submissives delightful. He’d been embraced even more than he’d hoped for when he’d been asked to be a part of the board that ran the club.

“Don’t worry about him none. He’s nothin’ but a big palooka. George an’ I can handle that rat.”

Thomas clapped Bruce on the back, chuckling. “I have nothing but the utmost faith in you both.” He glanced around the mostly darkened area, frowning. Only the electrified lanterns by the door gave off any light. “Where is George, by the way?”

He jumped as George slipped into the glow cast by the lamps, seemingly out of nowhere. With a hand over his thumping heart, he let out a shaky laugh. “Are you sure you’re not illusionists as well as prize fighters?”

George, an even more thickly compacted version of his hombre, shook his head. “No, chief. We’re just light on our feet. Gotta move fast in the ring.”

“Ah, yes.” Thomas smirked. “However, I’m not sure the same skills are required to master the submissive men here at the club.”

Both men shrugged simultaneously and Thomas was reminded of why they worked so well together as Dominants—they were always so in tandem with each other. If they ever fell for the same boy and decided to keep him, that would be one lucky submissive.

He turned to see Aaron waving frantically at him as he exited the mansion.

After thanking Bruce and George again, he trotted over to Aaron. He was anxious to know everything that had gone on when the confrontation with Preston had taken place and when Preston had discovered that Kenneth was done with him for good.

His friend was out of breath. “Change of plans. Kenneth is staying with Saul.”

“He…?” Thomas broke into a smile. Things were much improved already. “That’s wonderful news.”

“Yes, well, it is. But we have other problems now.”

“Otis and a few of his cronies are demanding to see the owner of Hampton Road immediately. They’re questioning whether we did the right thing by interfering with Preston and Kenneth.” Aaron ran a hand through his hair, as if attempting to get the greased strands back in place. “The whole idea of doing the nominations tonight for board membership has gone to hell too.”

Thomas pressed his lips together as he considered the turn of events. Otis had proven himself to be the one board member the most resistant to the idea of establishing rules to protect the safety of the submissives at the club. Initially, Thomas had been somewhat in agreement with Otis. He’d had his own issues with how easily the implementation of rules in the wrong hands could cause harm, but he’d relented once he’d witnessed Kenneth’s abuse for himself. After he’d also found out what Preston had done to Linus and that Kenneth hadn’t consented to much of what had been done to him, he’d come to agree that there did need to be at least some policies put into place. But there were still those who disagreed with that stance.

I cared about the characters so much. They drove the story. Seeing Linus begin to blossom while interacting with Thomas felt so good. I cheered for the two of them the entire book. There really is...

Compared to the other other books in the series this is very sweet, it shows how difficult it can be to trust and love another person. I think the author did a fantastic job in making this book and the...

Share what you thought about The Fear of Surrender and earn reward points.

• Vegas Strip. This show is about foot patrol cops on the . It is unbelievably entertaining — there's no other place like Vegas for outlandish antics. There was one cop in particular who became the inspiration for Shawn in the first Sin City Uniforms book — he was able to let all the insanity roll right off of him and never lost his humor.

Hello friends, today I have a real treat for you! The Hampton Road Club series by Morticia Knight is our feature series today,