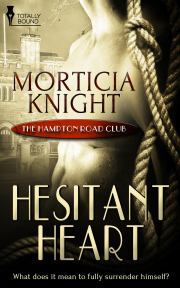 Sam is a naïve young man who arrives in Hollywood to escape his brutal father. When the older, sophisticated Aaron rescues him, Sam discovers what it means to fully surrender himself to another.

Eighteen year-old Sam Cunningham is used to living with lots of secrets. He’s had to hide his true nature his entire life or else incur the wrath of his strict and abusive father. When he’s faced with a horrible ultimatum, he flees to Hollywood where he hopes he can escape the fate his father has planned for him.

Aaron Rubenstein is a wealthy and sophisticated man who loses himself in painting portraits of bound men to help stave off his loneliness and despair. Unable to find a lasting connection with anyone, he’s had to resort to paying lovers not only for their affections, but to be allowed to indulge in his darker passions. Aaron’s only respite is his nights at the Hampton Road sadomasochism club where he’s a respected Dominant.

Naïve and inexperienced in the ways men can please one another, Sam takes a job at a bathhouse where he first glimpses a beautiful older man. Aaron notices the sweet towel boy watching him with interest every time he patronizes the Temple of Eros bathhouse. A traumatic incident for the innocent towel boy triggers Aaron’s protective tendencies and he’s compelled to rescue the gentle Sam from the clutches of the Temple’s manager.

They embark on a journey together that teaches them both things about themselves that they never knew. As their bond deepens and Sam is trained for his first night at the Hampton Road Club, an unknown danger lurks. Will Sam’s father find him and destroy both men’s chance for true happiness together? Or will Aaron protect his boy and keep him for always?

Reader Advisory: This book contains a scene of branding.

Aaron lightly stroked the soft skin of the ass he had just marked with his belt. Angry red stripes covered the young man‘s taut buttocks in a delicious pattern that Aaron had created by using the leather implement. He thanked the heavens that the newest style of men’s trousers was such that the fashion accessory had become all the rage. Suspenders had been quite unwieldy for him to use successfully.

But then everything had taken a decidedly modern turn in the nineteen twenties, and the current year of nineteen twenty-five was no exception. There was even a fascinating tape that didn’t need to be heated or moistened to make it sticky. It could be attached and ripped off at will. He smiled to himself at the uses he could make of such an item, especially on the areas of men’s bodies that were sensitive and decorated with hair.

“Are you still comfortable?” He kept his voice soft and soothing as he gently caressed.

“Listen, mister, I dunno what your definition of comfortable is, but having some fellow beat my rear end with a belt ain’t what I call enjoyable.”

The man lay on his belly across the padded table, his arms folded under his head, his face turned to one side.

“Would you prefer that I stop?”

“Will I still get my money?”

Aaron winced. It was always the same. The knot in the pit of his stomach returned. If it wasn’t for the club his good friend Saul had introduced him to when he’d first arrived in Los Angeles to stay the previous year, he would’ve gone completely mad. At least when he patronized the private establishment, the men were anxious for his beatings, his restraints. The rest of the time, he had to pay someone to submit to his demands.

“If the belt is too harsh, I can employ something different. But you would have to stay to receive the full payment we discussed. You did agree to be here with me under these circumstances for at least three hours, so I was not untruthful with you.”

The man—Harry?—remained silent and still as if he was considering Aaron’s words.

“Okay, mister. But my posterior is killing me. I’d be much obliged if you’d leave that alone.”

“I can make it better. Pleasurable.”

Aaron ghosted his fingers along Harry’s crease then dipped into the space where his ass cheeks and the top of his thighs met. He pushed farther in, encouraging Harry’s legs to open, hoping to be allowed access to his entrance, the tempting balls and what he’d noted was an increasingly lengthening shaft. Harry flinched then abruptly rolled off the table, away from Aaron. He leapt to his feet.

“Don’t you dare touch me like that, you deviant! I ain’t no queer!”

Raising one eyebrow in query as he glanced down at Harry’s stiffened dick, he hardened as well. He’d had to pick up his evening’s playmate off the streets in one of the seedier areas of town instead of at a pansy club the way he normally would have. He’d been too emotionally drained to go through the ritual of going to a speakeasy—dressing well, socializing with acquaintances. The dark moods that sometimes plagued him had assailed him that day with a vengeance.

So he’d settled for Harry instead and it seemed as if he’d made a mistake. Men who fancied themselves uninterested in other men could be such a challenge.

If only he would let me go a bit further, I could show him how wonderful it could be…

“I only meant to offer you some enjoyment. I wouldn’t expect anything in return.”

Harry bent to gather his clothing from the floor. “You’re sick. Perverted. Your kind should be wiped off the face of the earth.”

The words had served their purpose well enough. Aaron experienced the typical agony that they always inspired. But he’d become an expert at masking his hurt.

“Forgive me. Please stay and at least let me paint you. You have a lovely form. I’ll remain on the other side of the room. I won’t touch you at all. I’ll even pay you the full amount we agreed upon.”

There was a grunting noise and Harry quickly put on his trousers over the one piece underwear set he’d already hurriedly tugged on. He slipped the still attached suspenders over the shirt he’d finished buttoning up, not even bothering to tuck it in.

“I ain’t staying, no matter what. You make me sick.”

Sighing heavily, Aaron walked over to the tall cherry wood secretary. He lowered the closed writing surface then reached into one of the compartments to remove some bills. As he advanced toward Harry, the man jumped back.

Aaron held out the three ten dollar bills. Harry moistened his lips as he gazed at them then glanced up at Aaron with narrowed eyes.

“There is none. Please take it and leave.”

He tossed the money down, no longer wishing to interact with the man at all. Sauntering over to his black and gold etched glass bar cart, he didn’t take the trouble to stop and get dressed. If temperature and societal convention didn’t dictate his need to wear clothing, he would never even bother at all.

As he poured himself a brandy, he heard the tell-tale sounds of his previously desired companion for the evening preparing to leave. The door slammed and as soon as he turned, he saw that the bills he’d thrown on the ground had been retrieved. After taking a healthy swallow of the amber liquid in his glass, he allowed one tear to roll down his cheek, but that would be the only one. Weak men and the fairer sex gave in to the emotions of their sufferings. Aaron saved his soft feelings for the art he created—whether it was with paint on a cotton canvas or on the delectable canvas of flesh. For years he’d also saved it for love, but since he’d reached the age of thirty five, he’d allowed himself to let go of that ridiculous notion.

Harry had been right. He was a deviant. It had been pointed out to him enough times in his life that he knew it to be a fact. So he would continue to carry on as best as he could in his loneliness. He could release his internal agony through his paintings and practice his perversions with like-minded people. The Hampton Road Club called to him stronger than ever. It had become a safe haven.

It wasn’t easy working at the bathhouse, but Sam didn’t mind it at all. When he’d first arrived in Hollywood from San Francisco just a couple of months before, he’d been very lucky to find employment so quickly. The motorist he’d hitched a ride with had introduced him to the manager of the private men’s establishment after unsuccessfully attempting to convince Sam to live with him as his lover.

Louis had seemed like a nice enough fellow, but Sam would never just go with someone because they would take care of him. He wanted real, true love. When he’d explained that to Louis, he’d laughed heartily and tousled Sam’s hair.

‘You are so delightful, darling Sam. I envy the lucky man who steals your heart.’

I thought the author did such a awesome job with the time period in this book! She pulled you in from the start of this story and I could not put this book down once I started it.

There was steam in this...

Share what you thought about Hesitant Heart and earn reward points.

Hello friends, today I have a real treat for you! The Hampton Road Club series by Morticia Knight is our feature series today,