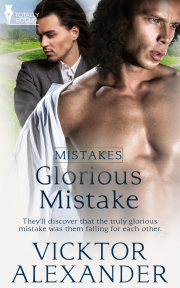 Book 2 in the Mistakes series

Keith Williams has spent his life hiding from his true sexuality, but when he stops to help Estevian Tucker on the side of the road, he realises that true love won’t let him run from this glorious mistake.

Keith Williams gets a phone call from his best friend, Russell Heter, about his decision to stay with Xavier, a much older, disgraced former mayor, in his cabin in Wyoming. Positive that Russell is making a mistake, Keith rushes off to rescue his friend from himself and his mistaken fantasy of being in love. However, when he sees a man on the side of the road, smoke billowing from his car, Keith pulls over and makes his own mistake.

Estevian Tucker’s life has gone from bad to worse. A single father of a developmentally delayed son, struggling to make ends meet, disowned and having just received even more, life-changing bad news, he escapes to Wyoming to visit his former mentor, Xavier Edmond. When Keith stops to help Estevian after his car finally dies completely, Estevian experiences an immediate and incredibly inconvenient attraction to the obviously straight stranger. He knows that taking a ride from temptation itself is a huge mistake, but it’s one he makes anyway.

Keith and Estevian are determined to not let their decision affect the future beyond the trip to Wyoming, not just for Estevian’s son EJ’s sake, but for their own as well. But when one mistake becomes another, they’ll discover that the truly glorious mistake was them falling for each other.

Keith Williams was not going to panic. He just wasn’t an excitable person, and he did not make rash decisions. He was going to be rational in his thinking before he jumped to conclusions and did something foolish.

He continued to tell himself that he wasn’t going to do anything spontaneous as he rushed around his apartment and grabbed long-sleeved shirts, jeans, thick socks, sweatshirts, winter coats and boots and tossed them all on his bed. He was a sensible person. He had to be. He might have gotten into college on an athletic scholarship for football, but he had majored in biophysics and minored in microbiology. His father hadn’t been too happy with his decision to get a ‘nerd job’, telling Keith that if he was going to throw away his chance at playing professional football then he should at least major in kinesiology so that he was still involved in sports. They had debated fiercely about it and Keith had eventually won the argument, but only because he’d pointed out to his father that biophysicists helped to prevent disease and provided the tools and understanding for treating cancer. It was the only thing that had made his father stop yelling. He’d turned to look at Keith’s mother, who had stage four ovarian cancer. And with tears in his eyes he had told Keith he’d “better get a fucking A in all those goddamn nerdy classes.” And Keith had done just that.

It hadn’t been enough, though. His mother had passed away six months before he’d gotten his master’s degree, and now that he had his doctorate, he was determined to do all he could to make sure that no other child had to suffer through the loss of a parent from cancer as he had.

But he refused to let the memory of losing his mother dwell in his mind in that moment. He was thinking about his friend, Russell Heter, and the last conversation he’d had with the man just hours before.

Keith had been stunned into silence. He’d already been concerned when Russell had informed him that he’d stumbled into the wrong cabin, and he’d had an emergency bag packed by the door ready to go, but it didn’t really contain everything he would need to head up into Wyoming. That bag was filled with socks and underwear, T-shirts—nothing serious, it was a ‘just in case’ bag, but now that Russell was deciding to stay with a man he’d only known for a short time? Well…

Keith patted his pockets and looked around his upstairs New York loft apartment to make sure he had everything he needed. After picking up his keys and wallet and shoving them into the pocket of his jeans along with his cell phone, Keith grabbed his two sports bags that held his clothes, shoes and toiletries. He slung his laptop bag that also held the files and documents he needed for his job over his shoulder and opened his front door. He loved Russell, probably more than the younger guy knew, and they were best friends. He was not going to let him make a mistake he would end up regretting later.

Closing then locking the door behind him, Keith headed toward the hallway elevator and tried to stop himself from pacing. It was a nervous habit he had, he knew that, along with biting his thumbnail, but he also knew it solved nothing for him to allow himself to get so worked up into an emotional and mental state that he couldn’t function.

The stainless steel panels of the elevator spread apart and Keith stepped inside and turned to press his back against the wall of the compartment after depressing the button for the lobby. He winced at the sound of the elevator music playing and tried to think about something else, anything else, that would keep him calm.

This is a great short story I only wish it was longer. This was an amazingly cute story that encompassed many emotions as well as trials and tribulations. The book shows that everything can be easier if...

Very sweet story of Keith, Russell’s best friend, coming to terms with his sexuality when he stops and helps Estevian. Along the way, Keith discovers that he cares a great deal for Estevian and...

Share what you thought about Glorious Mistake and earn reward points.

Other books in the Mistakes seriesView Series Page