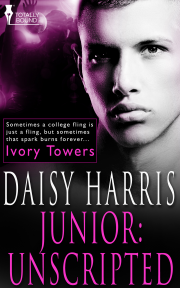 Two months filming his first movie away from school have left Shane Roberts a changed man—humbled, conflicted, and more than anything scared that his boyfriend Angel won't love him anymore once he finds out Shane's weaknesses.

Excited as Angel is to have Shane home, Angel wonders why Shane feels like a stranger. He knows Shane has a wall up, but has no idea how to rip it down. When the opportunity arises to explore a ménage with an old friend of Shane's, Angel is initially wary, but hopes that the experience will help jar him and Shane out of their funk.

If there's one thing Shane is still confident about, it's his abilities in the bedroom. So despite their high blood alcohol level and his niggling worry that sharing Angel with another man will ruin their relationship, Shane tries to give Angel the sexual experience of a lifetime.

But real world failures are tougher to handle than the silly hijinks Shane got up to in college. This time, the very thing Shane's always relied on to hold Angel and Shane together backfires spectacularly. Shane fears he's pushed Angel away right when he needs Angel the most.

If Shane wants to keep his boyfriend and save his relationship, he'll have to admit he's not the guy Angel thought he was. But maybe if Shane opens his heart, he'll find Angel loves him not only for his successes, but also for the man he is inside.

Shane leaned against Angel’s chest, hips swerving as he danced. There was whisky on Shane’s breath as he craned his head around to land a kiss on Angel’s mouth. Even if Shane was a little drunk, Angel didn’t care. He was so damn happy to have Shane home.

"I love this song!" Shane shouted over the noise at the club. He turned in Angel’s arms so that their hips met.

A sizzle of awareness ran up Angel’s belly until all he could do was grab Shane close and rest his cheek on the spot where his dark-striped dress shirt had pulled away from his shoulder. Shane was so fucking perfect against him, all long and sinewy, smelling like expensive cologne and musk. When Shane was away in New York, Angel kept his pillow unwashed so he could roll over whenever he wanted and bury his nose in the smell of his boyfriend.

They danced for a while like that, their grind slow at first, but getting rougher. All the other guys at the club danced like they knew people were watching. A couple of twinks were up on stage, twirling around and shaking their asses in between make-out sessions. A hundred guys filled the dance floor, all of them with the same vibe—move like you wanted to get laid.

He and Shane might have been the only guys in the joint not looking to score.

There was a gay club over by Pacific Rim University’s campus, but it was nothing like the West Hollywood scene. Factory was three floors, with four bars, a DJ turning music that even Angel had to admit was pretty good and lights and video screens on every wall. It felt like a circus. Guys shouted over the music, screaming for booze and sex and a good time. The testosterone was so thick you could cut it with a knife.

"Oh, hey!" Shane shouted from right next to Angel’s ear, though it was clear from the direction he wasn’t talking to Angel. He pulled away a few inches. "Hey! Tyrell!" Keeping an arm around Angel’s waist, he reached for a dark-skinned guy with corn rows who was wearing a fitted vest.

Tyrell jerked at the feel of Shane’s hand. When his eyes landed on Shane, he cracked a huge grin. "Shane Roberts! Motherfucker, man!" The guy never stopped the beat in his step as he called over the track. He wound to Shane’s side, still dancing.

"This is my boyfriend, Angel!"

Angel saw Shane’s lips move more than he heard him, since Shane had said it close to Tyrell’s ear.

"Cool." Tyrell was in front of Shane and Angel behind, with men hemming them in on both sides, so Tyrell reached over Shane’s shoulder to knock Angel’s hand. His smile was open and friendly, but Angel couldn’t help but notice how he was dancing pretty damn close to Shane.

"Evan here?" Tyrell fell into dancing with the front side of Shane.

Evan had moved out of Angel’s and Shane’s apartment at the end of Angel’s sophomore year, but he’d been Shane’s roommate for five years.

"Nah." Shane reached back and grabbed Angel’s hand. He laced their fingers together, reminding Angel that yes—Shane was his. Sometimes Angel forgot that, or got wrapped up in the distance when Shane was on the East Coast working.

Shane loved him. He said it every night on the phone when they talked. No pretty-boy club rat was going to change that, even if the way Tyrell ran a hand over Shane’s ass made Angel want to rip his fingers off.

"Aw! Well, tell him I said ‘hi’." Tyrell rolled his gaze over Angel’s face, peered around Shane’s shoulder to check out Angel’s body. He wasn’t a dick about it or anything, just curious.

Angel had got used to being scoped by guys at clubs, so he didn’t mind. Well, he didn’t mind until Tyrell nuzzled Shane’s ear before saying something else.

Shane threw his head back laughing.

"What?" Angel hoped he didn’t sound as pissed as he felt.

Craning his head around, Shane muttered, "He asked if we wanted a third tonight."

Anger rushed through Angel so fast it was all he could do not to land one on Tyrell’s mouth and drag Shane out of there. Fuck, Angel knew guys talked like that, and it didn’t have to mean anything. The way Tyrell was grinning, Angel could tell he was mostly joking around.

I found this a very emotional, hot and sexy story. It delves deeply into the thoughts and hearts of both men. I found it beautifully written and the characters deep and interesting. I love the love,...

Share what you thought about Junior: Unscripted and earn reward points.

Your stories focus on college life, so what was college like for you?

I adored college! It was the first time in my life I felt normal, and not like I was speaking a different language from everyone around me. A whole school full of nerds like myself! I was in heaven…