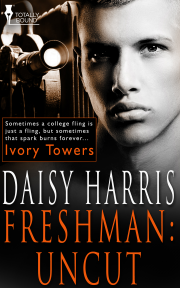 Sparks fly between jaded film TA, Shane, and tough-acting freshman, Angel. Shane gives Angel the sex he craves, but struggles to be the man he needs.

Shane's too old for Angel. Even if Angel weren't a freshman in Shane's Intro to Film class, the kid would be too closeted, too confused, too darn changeable and needy. But when Shane sees the pain lurking behind Angel's tough exterior, he can't help but reach out to him and give in to the desire in those scared, brown eyes.

Pacific Rim University may as well be another planet from the Oakland neighbourhood where Angel grew up. Angel's fought all his life to get respect, and to stay hard in the eyes of his friends back home. Always the weird kid, Angel was the guy who never hooked up with girls. Meeting his very sexy, very male Film TA, Angel starts to understand why. He refuses to admit he's gay, but he lives for every one of Shane's smiles.

When Shane takes Angel to task for his insolent attitude, Angel can't resist pushing his TA further. He wants Shane to show him, force him, make him accept all the feelings battling around in his mind and his body. But Angel doesn't just need sex. He needs a man who can help him navigate the new and very raw landscape of his feelings.

Shane stared out into the auditorium—his gaze kept landing on the scrawny punk slumped in the second to last row.

The kid didn’t look up.

He was a shade or two darker than Shane, with a scruff of kinky brown hair and a broad nose. His bone structure was amazing—high cheekbones, sharp, strong jaw. Shane couldn’t tell for sure, since he was sitting down, but he seemed short. Maybe five foot eight. He wore a white wife beater and a heavy gold chain. Black track pants and a tat on his shoulder? He was trying way too hard to look tough.

"That’s all for today." Professor Boehner flicked off the overhead and wrapped up the Intro to Film class. "Make sure you have those papers in by Monday. We’ll move onto archetypes next week."

The class burst into a round of applause, the over-excited freshmen falling all over themselves to get to the front of the room and swoon over the professor.

Shane cleared his stuff off the desk. He hadn’t taken any notes. As one of Boehner’s teaching assistants, he’d sat through Intro to Film three times already.

"Mr Roberts?" Boehner called over the heads of his adoring throng. "A moment?"

"Sure thing," Shane called back.

Boehner jerked his head at the back of the room, his eyes on the punk trying to make a quick getaway out the door. "Could you grab Mr Cruz? I’d like to speak with him."

Shane fought his way through the kids trying to get out of the auditorium. The brats would have parted like the Red Sea if it were Boehner walking up the aisle. Next class, Shane would make sure Boehner introduced him to the students and made it clear Shane would be grading a lot of their papers.

The punk was out the door by the time Shane reached him. He had his backpack hitched on one shoulder and a black PUMA track jacket draped over the other. The kids around him were giving him a wide berth. Stupid freshmen probably bought his gang-member act.

The kid turned at the sound of his voice. "Angel," he said, jutting his chin forward.

"Okay, Angel." Shane was too used to freshmen to be bugged by his impudent tone. "Boehner wants to talk to you."

The attitude drained from Angel’s face, making him look younger. He paled a little, and Shane saw a pattern of freckles across his nose and cheeks. Angel’s eyes were brown, but his right eye was grey in the lower right corner. Shane didn’t remember what it was called when a person’s eye was more than one colour. But whatever trick of genetics had given him that grey-blue slice, it added a layer of intrigue to his appearance that made Shane want to look for a lot longer than was appropriate. Damn, the kid was cute.

"I didn’t do nothin’ wrong." Angel leaned on his heels. The swagger crept back into his posture, and he lifted his chin and stuck out his chest. Something about how he did that made Shane think it wasn’t entirely an act. Angel had probably had to stand up for himself, and most likely to guys bigger than Shane.

Angel glanced Shane over, rolling his gaze to Shane’s toes and back up to his face.

Shane was used to being cruised, but he couldn’t tell if that’s what Angel was doing. The kid didn’t look interested as much as scared.

"I’m the TA." Shane shoved out his hand.

Shane crossed his arms, tossing every bit of Angel’s attitude back at him in the form of a cold, hard sneer. "You know, if you want to work in the film industry someday, you’re going to have to learn to deal with a few fags."

He watched his words sink in. Angel’s expression shifted from surprise to a blush of embarrassment. "Hey, man, I didn’t ask if you were." His defiant attitude was back, but he wouldn’t meet Shane’s eyes.

Angel’s eyes widened. "Oh. Well, no disrespect, man. What, you got a boyfriend or something?"

That one came out of left field, but Shane chose to ignore it. "We better get in there before Boehner has an aneurism." Shane headed for the door.

I absolutely loved Shane and Angel...an incredibly sexy story...I cannot wait to get more of these two. There is so much between them. They have the necessary attraction, but the insecurities, doubts,...

I really enjoyed this one. Harris knows how to write a hot sex scene and these guys are smoking together. Angel is a really interesting character and I really like the set up for this series. I can't...

Share what you thought about Freshman: Uncut and earn reward points.