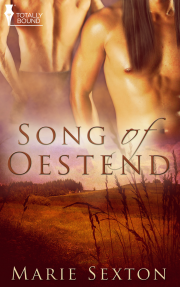 Aren Montrell has heard tales of the Oestend wraiths - mysterious creatures which come in the night and kill anyone who's not indoors. Aren's never had reason to believe the stories, but when he takes a job as a bookkeeper on the BarChi, a dusty cattle ranch on the remote Oestend prairie, he soon learns that the wraiths are real. Aren suddenly finds himself living in a supposedly haunted house and depending on wards and generators to protect him from unseen things in the night. As if that's not enough, he has to deal with a crotchety old blind woman, face "cows" that look like nothing he's ever seen before, and try to ignore the fact that he's apparently the most eligible bachelor around.

Aren also finds himself the one and only confidante of Deacon, the BarChi's burly foreman. Deacon runs the BarChi with an iron fist and is obviously relieved to finally have somebody he can talk to. As their relationship grows, Aren learns there's more to Deacon and the BarChi than he'd anticipated. Deacon seems determined to deny both his Oestend heritage and any claim he may have to the BarChi ranch, but if Aren is to survive the perils of Oestend, he'll have to convince Deacon to stop running from the past and finally claim everything that's his.

Reader Advisory: This book is set in an alternate reality and contains scenes of violence, mild D/s and bondage, and a M/M/M ménage scene.

Aren had heard of the wraiths, of course. Everyone had.

The thing was, nobody believed the stories were real. Not where he came from, anyway.

But on his first night in the town of Milton, as the wind howled outside and beat against the shuttered windows of his room, Aren Montrell lay awake and trembling in his bed. He began to remember every story he’d ever heard about the wraiths.

Every nanny—and probably every parent, too, although Aren wouldn’t know about that—told stories of children found cold and lifeless in the morning because some spiteful adult had left the window open after tucking the kids into bed. It was said that wraiths came on the darkest of nights, stealing the breath from any person fool enough not to be inside, behind closed doors. Even back home, across the sea, in the bustling cities of Lanstead, many houses had signs of protection over their front doors. Still, Aren had never had reason to believe the stories were true. He’d always believed the signs were more decorative than anything. But he’d quickly discovered upon his arrival in Oestend that every building had the signs, not just over the front door, but over every door, and the windows as well. Even the barn where weary travellers boarded their horses had been warded against the wraiths.

He’d seen the way the hostel-keeper and his wife had systematically checked each and every window in each and every room. He’d made note of the double bars on both the front and back doors. Then, as he was finishing his dinner, the wife had stopped next to him. Her hand on his shoulder was rough and callused and her face was grim. “Don’t open your window once the generator goes on,” she’d said. “I don’t care how hot you get.”

Aren wasn’t even sure what she meant by the word ‘generator’, but she’d moved on then, before Aren could ask questions. He’d nearly jumped out of his skin when the generator had kicked on a few minutes later—not that he would have known that was what it was if the woman hadn’t warned him. It made a nagging, low-pitched drone that Aren didn’t so much hear as feel, low in the base of his skull. He found it nerve-racking, but it was obvious the locals were used to it. He’d gone to his room feeling less than confident.

Maybe this had been a mistake. Maybe he shouldn’t have come here, to the pitiful, dusty edge of the world. But after the incident at the university, running to Oestend had seemed so logical. So obvious. A suddenly sympathetic Professor Sheldon had helped Aren secure a job at one of the large ranches on the Oestend prairie. At the time, Aren had thought Sheldon had done it out of pity. Now, as he faced the realisation that this was a life he did not know how to live, Aren began to also realise he’d been duped. No doubt Sheldon and Professor Dean Birmingham, the man Aren had thought of as his lover for the past four years, were laughing together over their brandy, pleased they’d manage to rid themselves of him.

“Fuck you,” Aren said. His voice was loud in the small room. He sounded strong, and it gave him courage. “Fuck you!” he said again, louder this time, feeling more sure of himself. “I’m not scared.”

He jumped as somebody pounded on the wall of his room. Not one of the wraiths that may or may not have been outside in the wind. It came from the room next to Aren’s. “People trying to sleep in here!” the man on the other side of the wall yelled.

Aren couldn’t believe anybody could sleep through the buzz of the generator and the racket of the wind and yet be kept awake by somebody talking, but he didn’t want to cause trouble, so he resolved to stop cussing at people who were halfway across the world. Still, his outburst had given him the strength he needed to examine his situation rationally.

There was no point in being scared. If there really were wraiths in Oestend, it was obvious the locals knew how to handle them. The man who’d hired him had directed him to this particular hostel for the night. Presumably he wouldn’t have sent Aren to a place that was known for allowing its tenants to be killed in their sleep. Although the shutters on windows rattled, they seemed solid enough, and Aren would have bet his last coin there was a warding sign over the window as well. He had to trust those things would be enough to keep him safe.

He pulled the blanket over his head and snuggled down under the covers. At least the bed was soft and the sheets were clean. Tomorrow, a man from the ranch would arrive to take him to his new home. Whatever this backwater land wanted to throw at him, Aren was sure he was ready.

What he wasn’t ready for was Deacon.

Deacon was the man who arrived to take Aren to the BarChi Ranch. Deacon had come into town the night before, but had apparently elected to spend the night elsewhere—in the stables or at the whorehouse or at another inn, Aren didn’t know, and didn’t care. Deacon arrived at the hostel the next morning driving a wooden wagon drawn by a pair of sturdy draft horses.

The first thing Aren noticed about him was the deep colour of his skin. Back on the continent, skin-tones ran from white to pink to golden, but one rarely saw anybody darker than the sun could make them. Deacon, on the other hand, had skin that was a rich, dark reddish-brown. He wore a straw cowboy hat, and his pitch-black hair hung in a queue down his back. Aren supposed him to be around thirty years old. He was tall and broad and muscular and rough and everything Aren might have expected from a man who’d spent his entire life doing hard labour on a remote Oestend ranch. He was exactly the kind of man who usually managed to make Aren feel small and insignificant simply by being there. He looked at Aren’s pile of luggage with barely disguised amusement.

“You got an awful lot of stuff,” he said, turning his mocking gaze onto Aren. “What’s in all those?”

Deacon’s scrutiny made him uncomfortable. Aren tried to smooth his light brown hair down—it had grown out longer than he’d ever had it, which was still short by Oestend standards. It was too short to pull into a queue like Deacon’s, and though Aren tried to keep it straight, it seemed determined to form soft curls around his ears. He had a hard enough time getting men to take him seriously because of his small stature. Having hair that curled like a girl’s wasn’t going to help.

“Well?” Deacon asked, still waiting for an answer. “What’s in the bags?”

Aren forced himself to stop fidgeting, although he couldn’t quite meet Deacon’s eyes. “My clothes. Books. Art supplies.”

“Art supplies?” Deacon asked, as if the words held no meaning for him.

“Yes,” Aren said, and for some reason, Deacon’s absurd question gave him the strength he needed to stand up straight and face the rough cowboy in front of him. “Canvas and paint.”

Deacon’s eyebrows went up, and although he didn’t laugh, it was clear he wanted to. “Good thing. Barn’s needed a new coat of paint for a while now.”

Aren felt his cheeks turning red, and he hid it by turning to pick up the nearest suitcase. It had seemed perfectly reasonable to bring his art supplies with him, especially since he feared both paint and canvas might be hard to come by on the ranch. It bothered him that Deacon had managed to make him feel foolish for it. The fact that he’d done it within moments of meeting him only made it sting more. 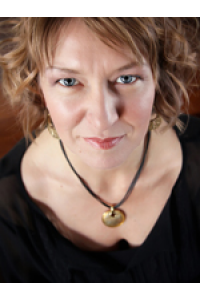 Marie Sexton lives in Colorado. She's a fan of just about anything that involves muscular young men piling on top of each other. In particular, she loves the Denver Broncos and enjoys going to the games with her husband. Her imaginary friends often tag along. Marie has one daughter, two cats, and one dog, all of whom seem bent on destroying what remains of her sanity. She loves them anyway.

Share what you thought about Song of Oestend and earn reward points.