Morticia Knight talks to Pride Publishing about her new release, Building Bonds, book one in her new Kiss of Leather series.

What can we expect from Building Bonds? 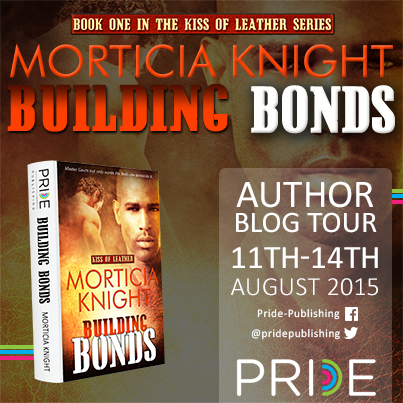 I don’t always write inexperienced subs, but they do turn up quite a bit! I love the big ‘aha’ moment in stories, whether reading or writing them. What’s so much fun for me with a sub character who is clueless about what he needs, is the slow burn, the coaxing the Dom has to do in order to bring that out of the poor unsuspecting bottom. Then there’s the payoff with that ‘aha’ moment when he finally submits.

Master Gavin is a stereotypical big, bad, scary Dom. Are these your favourite kinds of Doms to read about?

Yes. I love that a man who appears so tough and no nonsense can then melt around a beautiful sub. Although the subs in the stories typically go through major transformations, I like when the Dom does as well. There can be many reasons for that metamorphosis, but if there’s no change in the characters, no growth, I find that boring. 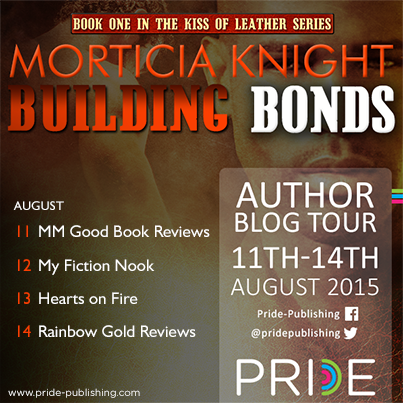 What do you prefer writing, series or standalones?

Series. I find it very difficult to stop writing about a world I’ve created. That’s been especially true with The Hampton Road Club series. I’d only ever meant for it to be three books, but the fourth came out recently, and I have three more, plus a free short, already sketched out. Part of it is the setting I chose. I had to invent a men’s secret sadomasochism club set in the 1920s, and I went into great detail into what it looks like, the era – which required a ton of research. I also had to work very hard to keep modern BDSM terms out of the books, and then there were all the people needed to make such a secretive place function. Sure enough, I started imagining the other attendees stories and readers began to ask about them. So there you have it!

More Hampton Road and Kiss of Leather of course!  But there’ll also be Venetian Skies in the Aim High Air Force anthology, and Negotiating Love, Steve’s story from the Sin City Uniform Series which will be coming out right after that. Hint: Steve’s a very kinky man *wink*.

Like the sound of Building Bonds? Find out more about it by following Morticia's blog tour!