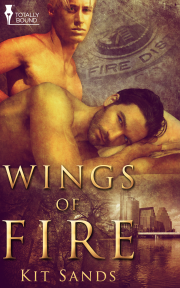 Angelico is Jamie's idea of a perfect man, but can he avoid the hateful actions of a deranged bigot long enough to have his dreams come true?

Jamieson Peele moves to Austin, Texas, on the heels of a failed long-term relationship. Starting over isn't easy-even less so once Jamie becomes the target of a hate crime. When he finally finds the man of his dreams, Jamie is willing to risk it all for a chance at love with the big Italian.

Fire fighter Salvatore Angelico's life will never be the same after he pulls Jamie from the burning wreckage of a car accident. Angelico must decide to tear down his defences and have faith in love again.

Together, they must face old demons and new dangers if they hope to fly on wings of fire.

“What’s the situation, LT?” Salvatore Angelico shouted over the station house alarms as he stepped into his turnout gear.

“Looks like a multiple car collision on the 183. At least one extraction expected, make sure you grab the Big Bitch before you guys roll. From the sounds of it, the scene is a cluster-fuck.” Lieutenant Gary Nelson, whom everyone called LT, held the phone receiver to his ear with his shoulder while jotting notes furiously on a pad. “Dispatch has a witness on the line with them but I’m not getting anything new, she’s just hysterical at this point.”

Angelico nodded to LT, pulled on his helmet and went to the equipment shelf to get the Hurst Jaws of Life tool, affectionately called the Big Bitch. The Cedar Park Fire Department‘s Hurst was well over ten years old, but the city—which was just a small suburb of Austin—couldn’t afford a new one, so everyone had learnt how to keep the Big Bitch in working order. Thankfully, she spent most of her time sitting on the rack.

Hopping up into the passenger seat of the rescue engine, Angelico turned on the sirens and signalled to Julio Chavez to pull out of the garage. The streets were mostly clear—typical for a Tuesday night. Within minutes Julio was steering them up onto the 183 northbound exit ramp.

“Christ in a hand basket! Are you seeing this, Angelico?” Julio shouted at him a few minutes later as he flipped off the sirens, leaving the emergency lights blinking.

Without answering Angelico jumped out of the engine, taking a moment to grab the Big Bitch and a crash kit. Thinking that it would be a damned miracle if the driver had managed to live through the wreck, he ran towards the overturned car.

What once had been a sporty Mazda3 was now a mangled mass of crushed steel. The car had been flipped onto its roof and the front end was scrunched on top of a cement barrier that was nearly dissecting the vehicle. The windshield had been shattered but remained intact, though it was pressed against the barrier.

Fuel sprayed in an arc from the damaged injection system. Oil and other fluids were leaking from multiple severed hoses and Angelico could see it pooling inside the car. With the ignition likely still on, it was only a matter of time before the thing lit up.

“Julio! Take the Bitch and you get that door beam. I’ll pull the poor bastard out. There isn’t another way and he doesn’t have time for us to try anything else. You cut and I’ll grab. Then we’ll deal with any clean-up once he’s in the clear.”

Julio nodded then gathered up the powerful tool. After a look at Angelico, he started cutting through the metal door frame. After a few minutes, smoke started to swirl into the air above the exposed undercarriage. The damaged fuel line was still spraying gasoline everywhere.

Angelico braced his foot against the roof of the car and the width of metal that was the door jamb. “Shit! Don’t stop, we’ve got smoke! Almost there!”

Out of the corner of his eye, he could see the tell-tale flicker of a fire under the dash. Angelico watched as a small flame burst into life on the driver’s legs. With a final thrust of the tool, Julio severed the metal leaving a wide, though short, opening where the driver’s side windows had been.

“I’ll get him. Go, go, go!” Angelico yelled. Julio ran back to the rescue engine and started uncoiling hoses.

As soon as the door jamb collapsed, Angelico was on his knees with his knife in hand. Two quick slashes to the seat belt and the man’s body fell into his arms. Cursing, he pulled the guy out of the car, hoisted him up and ran away from the now-burning wreck.

Once he was about fifty feet away from the fire, Angelico laid the man on the ground, patting out the few remaining flames on the guy’s shirt and trousers. Opening up the crash kit, he started to unpack gloves and gauze. With the bright, fluorescent lights of the underpass, it was easy to see that his patient was bleeding from a cut above one dark brown eyebrow.

While he was checking his vital signs, the patient gave a low moan then opened the palest blue eyes Angelico had ever seen. “Shhh, man. You’re all right, but you gotta stay still until the paramedics get here with the ambulance.”

Before Angelico realised it, a hand grazed his cheek and the man mumbled what sounded like ‘angel’ before he fell back into unconsciousness. Shrugging the moment off, he continued to monitor the patient’s vitals until the paramedics pulled up. 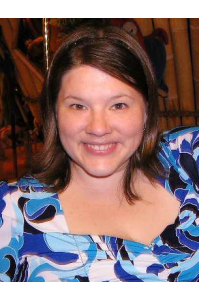 A voracious reader from an early age, Kit has always enjoyed a great story, new or old. After dabbling in the online world of fan fiction, she decided to give her own characters a voice. Fortunately, now they won't shut up!

With a career in IT and an avid love of video games, Kit considers herself a geek, not a nerd. What's the difference? Geeks have social skills.

A Southern transplant, Kit now calls Ohio home where she lives with her husband and devoted beagle hound.

If you like stories about hurt characters who find their life partner who helps them overcome their past, and if a hot firefighter with the look of an angel is what you'd like to read about, you might...

Wings of Fire was an amazing story...Kit Sands has penned a winner with Wings of Fire, where pure love can grow out of an act of hate.

Share what you thought about Wings of Fire and earn reward points.