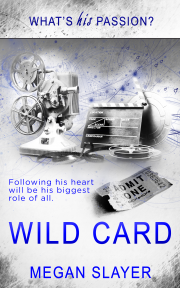 Following his heart and passion will be his biggest role of all.

Kris Hunter wants out. He’s done pornographic films for the last six years. The pay’s been good, but his creativity is nearly dead. His passion is to act and to be a star on the big screen in mainstream films. When he auditions for famed casting director, Zayn Mason, he’s convinced he’s on the right path. He doesn’t want to take the casting couch route to success, but he certainly wants Zayn in his bed. Can he follow his dreams and the man he desires or will forces beyond his control derail his progress?

Reader Advisory: This book contains scenes of voyerism and intimacy with multiple partners.

He raked his fingers through his hair and read through his lines again. There wasn’t much to the script. A few lines about getting to know his playmate, then naked time. God. He’d been asked to star in another first experience flick. He should’ve known better.

If he wanted to get out of the business, he’d have to star in a few more films and bank up the rest of the money he needed. Time to get his head into the game.

Kris nodded. He needed to get into the headspace of a guy who wanted to hook up with a younger man. Gag. At twenty-seven, he wasn’t that fucking old. Still, he needed the money to fund his dream. He formed an image of his costar in his mind. Although he wasn’t attracted to the other performer, Kris did his best to act the part.

“That’s right,” Kris murmured. “You know how to kiss.”

His costar, Garig Ross, strode into the living room. “Are you actually practicing your lines?”

Kris opened his eyes. He hadn’t realized he’d closed them. “Go fuck yourself.”

“Now that’s not the way to entice me to want to be fucked by you.” Garig shrugged out of his street clothes. Unlike Kris, Garig seemed to love being nude. He folded his jeans and tucked his things into his duffle bag. “You’re supposed to make me at least kind of want to be with you.”

“I don’t want to be here or with you.” Kris dropped the script onto his bag. “I’m tired of these movies.”

“So?” Garig shook out the ripped denim. He waved the jeans around. “This won’t cover my ass.”

“That’s the point. You’re supposed to look young, interested, and green as hell but ready to take a seven-inch cock up your tight ass.” Kris rolled his eyes. “You’re young, but you are no virgin.”

“Don’t you know it.” Garig stepped into the jeans, then slid his cowboy boots back on. He admired his ass in the mirror. “Papa likes what he sees.”

If Kris had been on the prowl for a date and wasn’t picky, he might have hooked up with Garig for real. The guy was handsome. From his perfectly styled hair combed to appear as if he’d rolled straight out of bed, down his chiseled body to his sculpted legs, he personified sexy. Most guys wanted to fuck him—except Kris.

He’d made fifteen flicks with Garig. None of them endeared Garig to him. The guy might be hot, but he was also a hot mess. He dropped his pants for everyone and God only knew if he was careful.

“We’re going to do this thing.” Garig wriggled into the vest. His pierced nipples glinted in the light. “What are you saving all that money for?”

“Nothing.” Kris glanced in the mirror and slicked his hair back. He never wore his hair forward in the films. The combed-back style made him feel like the character rather than himself. Maybe that was crazy, but he preferred having the bit of separation.

He tucked his wallet, keys and phone into his bag, then stripped down to his running pants and the tank top. According to the script, he was supposed to start out on his balcony. Garig would be on the balcony next door, flirting.

He closed his eyes again. Three more films and he’d have enough money. A momentary vision popped into his brain. He didn’t want to be in front of the camera without his clothes. He’d be making actual movies with plots and good actors. Even if he had to fund the damn thing himself, he was going to be a real actor in a real movie. He opened his eyes. Get the film done and move forward.

“All right. Let’s go,” the director said. He pointed to Kris. “Your condoms and lube are beside the bed.”

“You’d make so much more money if you’d just do these bare.” Garig shrugged. “I’m raking it in.”

“I’m fine with what I’m doing.” At least when they worked, he knew he was safe. Kris made his way through the bedroom and stopped on the balcony.

“You’re going to chat him up. Stick to the script if you want, but you have to say he’s a hot piece of ass and you want to do him,” the director said. He clapped Kris on the shoulder. “Just make it sound intelligent and like you really want him.”

God. Kris stood on the balcony and gripped the railing. Three years before, he’d have considered throwing himself over the edge. Too many demons remained with him. He shook off the black feelings and focused on the job at hand.

“Ready? Action.” The director pointed to him. The camera clicked.

Time to shine. Kris gripped the railing again and stared at the city below. The palm trees waved in the slight breeze. Cars zipped down the street.

“There is nothing happening in this city.” He sighed. “Nothing.”

Garig appeared on his own balcony. “I don’t know about that.”

“I am, and in more ways than you know.” Garig grinned. “Where’s your boyfriend?”

Ah. They weren’t following the script at all. Kris folded his hands. “I’m single. You?”

“Ready to mingle,” Garig replied. “Let me come over.”

“The door is open.” Kris nodded toward the other side of the apartment. “Let yourself in.”

He glanced over at Garig. The only acting he’d get to do now would be to appear to be interested in what was going on. Another player strolled into the room. Not a grip or a camera man. Kris studied the new guy. Young and very eager. The kid practically bounced over to the director.

“Who?” Kris heard the director ask. “Oh. Over there. You know what to do.”

The kid crossed the room and stood in front of Kris. He didn’t say anything, just stared at him.

The Wild Card is all about hope and determination. If you have enough of them both you will generally always succeed! I you want to read an uplifting story about someone who deserves to win actually winni...

The Wild Card is all about hope and determination. If you have enough of them both you will generally always succeed! If you want to read an uplifting story about someone who deserves to win actually winni...

Share what you thought about Wild Card and earn reward points.