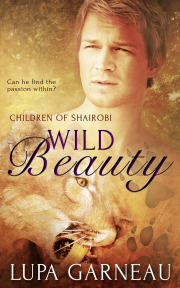 Book 2 in the Children of Shairobi series

His magic stolen, Cherchi has little reason to live until an unassuming ocelot helps him find the passion within.

After having his magic stolen by the shifter’s archenemies, the demon-like Kaga, Cherchi is left scared and struggling to move on. Consumed by the longing of happier days before the attack, he retreats from his clan. A single promise to attend his clan-leader’s mating ceremony is the only thing keeping his heart beating.

There was once a time when Luka cherished his gifts, but after suffering an unspeakable tragedy, he has learned to resent them. Still, he never turns away a wounded heart. After his sister is bitten by a vampire, putting her unborn cub in jeopardy, his family travels to the legendary home of the Rune Fang in search of the Life-Binder.

Cherchi quickly finds himself the object of Luka’s interest and, although he wishes to be alone in his misery, he can’t deny a deep-seated attraction to the male. Luka’s extraordinary gifts heal his ravaged heart, but can he learn to live without the magic that makes him a shifter?

Publisher's Note: This book was previously self-published by the author. It has been revised and re-edited for release with Pride Publishing.

Cherchi sat up in his bed. His back protested. His muscles were wound tight and he was sweaty from lying so long, but he had little energy to do anything else. The cool breeze of the changing season swept through the window and into his cabin. One of his brothers must have opened it. The wind ran over his skin and glided through his hair. There’d been a time when he’d craved the feeling of the wind stroking his locks, but that seemed like so long ago that he could hardly remember it.

He pushed his hands through his short, golden locks. He’d cut it recently and what had once been waist-long flowing ribbons of sunshine were nothing more than a jumbled haystack. He couldn’t deal with another reminder of who he’d been. He used to love racing the wind, feeling the breeze whip his hair around as he’d pumped his legs so hard he’d thought he would take to the sky.

No more. That’s not me and it will never be again.

Sighing, he touched his bare feet to the floor and stretched his body. His muscles didn’t like that very much, but it was a minor inconvenience. His wounds had healed—mostly, anyway. He still had some nasty scars, but Storm, their shaman, had assured him they’d fade in time. Not that it mattered, though. Compared to the spiritual damage, a few scars couldn’t compare. He couldn’t feel the magic that allowed him to shift anymore and he was terrified to search too deeply. He knew everyone suspected he’d lost that staple of his heritage, but he was unable to bring himself to admit it.

Slowly, he got up on his feet and took a moment to fight off the shakiness. His strength was ebbing, whether from lazing in bed all day or because of his injuries, he wasn’t sure. Maybe he just lacked the willpower to get better. He made his way over to his mirror and blinked at himself. At least, he thought that was his reflection. It didn’t completely seem like him, yet a familiar and weary face looked back at him. He’d lost some weight and his scars seemed garish, the teeth and claw marks jumping out. He ran his hands over his mid-section, wishing they weren’t there. They were just another reminder of what had been taken from him.

He blew out a big breath as he looked out of the opened window. Birds chirped and the happy shouts of his brothers rang out. He’d bet if he walked outside, he’d be met with a vast blue sky where puffy white clouds drifted aimlessly and the sun lit up the meadow where his clan—the Rune Fangs—made their home. A deep-rooted desire to go and be with his people gripped him, an ancient need to be touched and accepted, but then he’d have to deal with all the coddling and looks of pity. He should probably go outside and greet them, though, before someone came looking for him. He hadn’t made an appearance for morning meal like he usually did. He just wanted to be alone in his misery, but no one seemed to understand that.

He knew that, but there was nothing they could do and they needed to come to terms with that truth. Cole had sat with him often, touched him, tried to heal him with his new-found power, but nothing could replace the emptiness that now resided inside him. If that male couldn’t fix him, then Cherchi doubted there was anyone that could.

He pushed his legs into a pair of blue jeans and made an effort to comb his hair so that he looked halfway alive. I’m not fooling anybody.

A knock at his door caught his attention. He guessed it was someone coming to check up on him.

Nexhan, his clan leader, peeked in, his smile warm.

“Come in,” Cherchi said weakly and looked for a shirt to cover his scars. He didn’t like people seeing them. Heck, he hated seeing them himself.

Nexhan entered and gingerly closed the door behind him. He took a seat on a small chair made from woven vines and said, “How are you feeling?”

Humoring him, Cherchi offered a faint smile. “Not too bad. Better today.” I’ll never be okay.

Nexhan nodded. “Hihano wants to have a cookout tonight. With all our guests here and more arriving every day, I think it’s a good idea. Are you up for it?”

No, he wasn’t. Besides, he knew the real reason for the cookout was to get him up and out of bed. He shrugged. “Sure.”

Nexhan nodded, offering Cherchi a smile. Cherchi sensed his Mi’wisa wanted to tug him close and hold him, but he hesitated. Cherchi wasn’t sure if he wanted him to or not. A part of him did—that lost part that refused to completely die—but the rest balked at any physical contact. The memory of sickly limbs holding him down was too fresh in his mind.

“It’s a lovely day today. Everyone is asking about you,” Nexhan remarked.

“Of course they are,” Cherchi mumbled to himself then gave his clan leader a rueful smile. He quickly changed the subject, “I heard the Earth-Touched have predicted a harsh winter. Have you decided to move up the Harvest yet?”

Nexhan nodded. “Three weeks, depending on the weather.”

“Done,” Nexhan said, enthused. “We will have a meeting later this week to see what needs to be done and to hand out tasks.”

Cherchi usually helped in the field, pulled massive carts containing the year’s bounty, but in his weakened state, he’d likely be unable to fulfill those duties. Still, he wanted to do something.

After a long moment, Nexhan remarked, “Cole has finally decided on daisies.”

“It’s the wrong time of the year for them,” Cherchi commented and mentally bonked himself in the head for saying such a thing. It wasn’t his intention to damper the male’s jovial mood.

“Indeed,” Nexhan said solemnly, scratching his chin. “I’m sure I’ll figure something out. Oh, and…”

Cherchi listened to his clan leader talk animatedly about his up-and-coming mating ceremony. Cherchi was happy for him, but was unable to share in it. After they’d announced their plans for a ceremony, Cherchi had made a silent promise to attend. Now he was bound by his word and he knew that was the only reason he was still breathing. He nodded as the man went on and on.

“Well, should we expect to see you tonight?” Nexhan asked.

Cherchi didn’t miss the hidden command there. He nodded and tried to offer his Mi’wisa an enthusiastic smile, but failed. “I’ll be there.”

Standing up to his full seven foot height, Nexhan hesitated for a moment. All shifters craved touch and it was often freely given and accepted, but Cherchi brushed him off by pretending to look for something. Nexhan bid him farewell then left.

Cherchi did want to feel the skin of his clan leader against his body, scent his wild hair, but he had a hard time controlling his despair. Nexhan was likely to pick up on it instantly and unintentionally stir up memories. Cherchi had given up on ever rejoining his clan, though it pained him to admit it, he was no longer shifter. His magic had been stolen from him and now he was just an empty shell.

Am I human now? No longer a magical creature?

Lupa Garneau is a romance and erotica author in both the gay and straight genres. She lives in Chicago—home of the best music scene on the planet!—with her Doberman Danni, and mew, Ollie.

Share what you thought about Wild Beauty PRINT and earn reward points.

Other books in the Children of Shairobi seriesView Series Page