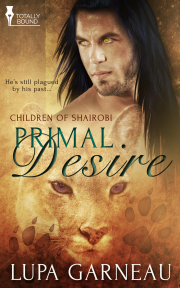 Book 1 in the Children of Shairobi series

Cole never thought he’d find himself in those he was running from… Until he met Nexhan, clan leader of a legendary shifter race.

After a century of vengeance, Nexhan, clan leader of the Rune Fang, returns home to find his people teetering on the edge of extinction. Still plagued by his past and his sense of failure, he has closed himself off from even his closest friend. He is desperate to return to the shifter way of life, but doesn’t know how to cope with the death of his family and his lover.

Cole is the typical outcast—clumsy, quiet and angry. After years of disappointing his parents with his inability to master his cougar’s predatory skills, he runs from the pressure to mate a female who he’s unable to love, but he never expected to end up living among the saber-toothed cats. Heck, he didn’t even know they still existed. Embarrassed by his lack of skills, he retreats into himself, quietly nursing his pain.

A chance meeting in the forest leads Cole to accept Nexhan’s help and companionship, but he never imagined he’d be trusting the male with his deepest secrets. Nexhan vows it’s just sex, but the cougar intrigues him like nothing and no one before. Can he move on and finally lay to rest his troubled past?

Nexhan sniffed the air, his nostrils flaring as he tested the scents—the crispness of the weeds, the softness of the wild flowers in full bloom and the sweetness of the sequoia sap. He flicked his ears and looked up. The trees filled overhead, their thin leaves making way for only a few ribbons of sunlight to stream down, lighting up the fog like clouds of silver.

It had been too long since he had looked upon the giants of the forest, the forever living, and he couldn’t help the surge of warmth that spread through him. Here was the raw, primal beauty of the Mother, the majesty of life and perseverance, and Nexhan had almost forgotten why he had left in the first place.

He reared up on his powerful hind legs and unsheathed his claws, the curved weapons sinking into the twelve-inch thick bark. He pulled, feeling his claws stretch and the bark give away into tiny splinters. He knew this tree, remembered when it had been a ten-foot sapling. That had been over seven hundred years ago.

His sensitive ears caught the smooth cooing of a hawk in the distance and he craned his neck, watching a branch shift above him. The low caterwaul of a bobcat sounded far away. He curled his lips back and issued a roar, a reclaiming shout that stretched across the land and echoed through the trees. It was his declaration of returning, his staking of the territory, and a stern reminder to all that dwell here that the boss was back on duty.

Nexhan fell back on all fours, the cool dirt shifting under the pads of his heavy paws. The grasses and wood debris tickled his toes as he pulled his massive weight forward, inhaling the calming scent of the forest. It was so welcomed against the overwhelming stink of the human city—all that rotting garbage and pollutants. He wondered how he had ever survived living in the metal forests of humanity.

He arched his back and rubbed himself against the scratchy bark of a Sitka spruce, spreading his scent along the surface. Like many of the trees, their trunks were covered in mats of moss, the tiny, sage-green bristles soft against his pelt like thousands of little fingers.

He cocked his head and perked his ears as the soft beat of wings caught his attention. He knew this sound, and despite having been away for so long, he recognized it instantly. A hummingbird emerged from the shrub, the steady pumping of its little wings like a blur of color as it hovered in front of him. The creature’s thread-thin beak poked him gently in the nose, the bird’s body no bigger than his nostril. He chuffed a hello, his breath sending the bird backward, and the tiny thing floated away into the bushes to do its business.

Nexhan took a deep breath and stuck his tongue out, tasting the scents, reacquainting himself with the forest. A cool breeze swept down and flowed through the trees, rattling their branches softly. It caressed his fur like a parent’s reassuring touch and he reveled in the contact, his heart soaring.

The song of earth was all about him. It was in every tree, every root, every stone. It was in the air, in the tiny spores and pollen grains that danced in the wild winds. It was in the hummingbirds, the hawks and the insects. It reached out through the moss and the ferns, and shot up through the giant sequoias, spreading out into the sky, churning with the mighty thunderheads. It was energy, life. He was being welcomed home by the forest, the beasts and the birds, and by his Mother. It felt wonderful. There were no words to describe her melodies, her gentle hums and deep crescendos. Beauty was too plain a word.

Along with the breeze came a peculiar scent. He curled his lips over his fangs and sucked in so that he could get a better taste. It wasn’t one of his brothers, but it wasn’t wholly animal, either. Curious, he padded over the lush forest floor, silent as a snake, and made his way toward the scent. It was fresh, earthy, with the spice of male musk.

He weaved through the huge trunks and padded softly over the brush, his paws making not a sound as he closed in on the intruder. Nexhan lowered his head and flattened his ears as he drew closer, the sound of thumping and agitated growls filling the air. The creature was making so much noise that he was likely to pass as a human, as clumsy and loud as they were. And humans frequented this forest. Mostly tourists. They called Nexhan’s home Redwood National Park, but to him it was Weywoni Le Gai, home to the red daughters, the ever living of the Mother.

Nexhan peered out from behind a sequoia, his nostrils flaring wider this time as he observed the cougar—a young male, sleek and muscular—darting around, pouncing as if he were playing tag with a swift-footed rabbit. He was in good health, his body strong, beautifully built—made to kill and protect—but his movements were awkward and uncoordinated. His coat was smooth and tawny, his eyes a most peculiar violet like the twilight sky, and he had an air of youthful uncertainty about him.

He was shifter, just like Nexhan. But, what was he doing here?

Nexhan cocked his head in intrigue and stepped out, making himself known. This was Rune Fang territory, and although wild cougars made this forest their home, the cougar-shifters very rarely strayed into his domain. They tended to keep to the mountain regions, scouring the cliffs of the Rockies and building their homes around the high-altitude forests.

The cat jerked when Nexhan chuffed a greeting, the male’s body stiffening, ears flattening. He hissed a warning but fear lurked his eyes. Not fear as though he believed he’d be harmed, but fear of the unknown. Nexhan understood. His species was on the brink of extinction and a young cougar-shifter wouldn’t recognize a Rune Fang if one pounced him head on.

Nexhan chuffed again, attempting to ease the male’s uncertainty. He stopped a few feet from the smaller cat and eyed him with amusement. The male curled into himself, his hackles up, claws unsheathed, those lovely eyes watching him with wariness.

Using the current of energy that flowed out from the earth and known only to shifters and their ilk, he plucked a thread and relayed the message, “You’re a long way from home. Why are you on Rune Fang land?”

The male seemed stunned as his mind filled with Nexhan’s words. Perhaps he hadn’t been taught how to communicate using the language of the earth? Well, he was young, but all cubs were shown how to read the currents, decipher them and send their own thoughts through. But the cougar-shifter merely blinked at Nexhan, his ears going back, his pupils expanding as though he were deep in concentration.

Nexhan tried again, “What is your name?”

The male didn’t respond, just pushed his butt back against a rock and hissed. Nexhan towered over him, his height twice that of the young male, his weight nearly triple, and the cougar-shifter was spitting at him? Really? A bit annoyed and maybe a little amused, Nexhan curled his lip, letting the cat get a good look at the fourteen-inch fangs protruding from his skull—as though they could be missed with a closed maw, anyway? For laughs, he roared an ear-piercing shout of superiority.

The cougar-shifter started, his pupils dilating further, his ears flattening so much that he looked goofy, but he made no move to run. He wouldn’t. That would be a show of weakness, and young males were notorious for their foolish bravery. The humans called it balls of steel. Either way, the cat wasn’t backing down, even when he knew he had no chance of besting the six-foot Rune Fang in front of him.

Lupa Garneau is a romance and erotica author in both the gay and straight genres. She lives in Chicago—home of the best music scene on the planet!—with her Doberman Danni, and mew, Ollie.

Primal Desire sets up this series wonderfully, and gives the reader a refreshing spin on the shifter sub-genre.  The characters, both main and secondary, are well written, and Cole and Nexhan...

A steady pace and smooth flowing plot captivates readers with lots of suspense and passion. The reader can’t help but get caught up in Nexhan and Cole’s emotionally gripping story as both of them have...

Share what you thought about Primal Desire and earn reward points.

Other books in the Children of Shairobi seriesView Series Page