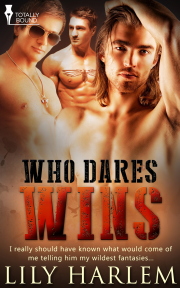 When secret service becomes not so secret servicing by not one, but two sexy soldiers, Ken learns that dreams can come true in explosive style!

Waiting for my SAS husband Jack to come home safe and sound is always a gut-wrenching, heart-twisting time. I have no idea where he is, what jungle swamp he may be lying out in or desert he might be marching across.

So naturally when he returns to me, our emotions can't fail to run hot and our lust for each other cranks up to sky-high levels. But the one thing about Jack is he lives for the extreme and seizes the moment. I really should have known what would come of me telling him my wildest fantasies.

Oh, yes, he's a guy who gets results…and when he brings home his colleague Slider, equally tough, equally rough, the pair of them can't fail to hit the target. That target happens to be lucky old me and I head off on the ride of my life…

It’s the dreams that are the worst when Jack is away. They start off pleasant enough—me riding a bike in the woods, a picnic spread on a blanket with the sea breeze ruffling my hair, my handsome soldier-lover talking of our plans for the future—but they always turn dark, these dreams. Before I wake there’s a plunge into blackness, an abyss, like falling from a plane without a parachute and flailing for something to hold on to—reaching out and finding nothing.

When I do wake I’m left with this gut-wrenching breathlessness, my heart is racing and my limbs are heavy. Often it’s this one section of the night that lingers with me, it’s a sensation of running but not getting anywhere, putting all of my efforts into reaching Jack, battling uneven terrain, steaming uphill, fighting enemies. But my limbs are leaden, my efforts not rewarded.

It doesn’t take a psychologist to decipher the meaning. I’m just a deputy manager of a small town garden centre and I can figure out the symbolism.

When my partner Jack is away on a mission and I’m left at home in our little Cornish cottage, I’m utterly helpless. Oh, not that I can’t get up in the morning and get on with my day. That’s fine. I’m just not part of his terrifying world. If something happens to him, then yes, they’ll tell me eventually, but not until it’s too late, not until it’s over for him. If he needed me, was shot by enemy fire, captured and tortured, I’d never know until his ordeal was history.

Until he was history.

“Morning, Ken,” Mary said, rattling a trolley of begonias past me.

I glanced up from the vegetable seed stock chart I was double-checking. “Hey, Mary. How are you?”

“Great, thanks. Busy though, boss. We’ve just had another delivery.”

I grinned. “Good, now stop slacking and go and earn your money.”

She stuck her tongue out, then smiled and carried on towards the aisle of sweetly scented border plants.

Working at Bedding Beautiful was a godsend. Not only did it take my mind off the scary times when my gorgeous Master was away on duty, it also provided me with a kind of pseudo family. Everyone knew and accepted that I was gay and that I was sometimes teetering on the edge of my nerves. They didn’t know what Jack did exactly, that was confidential information, but they knew he worked away and I was left home alone.

Stock check complete, I headed to the cold drinks machine, slipped in a coin and watched a can of Coke rattle to the bottom tray. I then grabbed a muesli bar from the shelf—I’d never have Jack’s honed physique, if anything I was a little on the skinny side—and flipped open my wallet to pay for the shop purchase.

An image of Jack stared back at me.

Award-winning, bestselling author Lily Harlem lives in the UK and is a complete floozy when it comes to genres and pairings, writing from male/female contemporary to gay paranormal and everything in between.

One thing you can be sure of when you pick up a Lily book is heat will rise from the pages and you'll be reading late into the night! Enjoy!

Another winner from the imagination of Lily Harlem. Ken is left alone for weeks on end whilst his husband is away on active duty. They had previously talked about their fantasies and this kept Ken g...

This is a scorching hot ménage scene that puts Ken in the middle of so much pleasure he's transported to another plane. Hot, hot hot. I just wanted more, more more. I could have read about these three...

Share what you thought about Who Dares Wins and earn reward points.