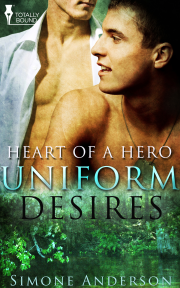 Book 1 in the Heart of a Hero series

Patience and training have provided him with the tools he'll need to fight for what he wants.

Home on leave, Cade Donovan isn't looking for a hook-up, let alone love. Certainly not while he is out with his brothers. When Cade steps in to even the odds in a fight outside a bar, he is instantly drawn to the man being ganged up on. Acting on instinct, the Marine Corps sniper is drawn to the smaller man like a moth to a flame, refusing to give up until the man is his.

Being the younger brother of the school bully has made Jason Carlson's life hell. During yet another retaliatory fight, a man comes to Jason's aid just when he thinks his life and his luck have gone from bad to worse. Warned to stay away from his home, Jason accepts the invitation of his rescuer and soon realises that his life has been forever altered. He can have everything he desires, if he's willing trust Cade with his heart.

When the reality of loving a man in uniform sets in, Jason must find the strength within himself to believe and know that love is worth fighting for.

Publisher's Note: This story has been previously released as part of the His Hero anthology by Totally Bound Publishing. The books in this series are only linked by theme, not by characters or setting, and may be read in any order, as each book is a stand-alone story.

The plea—barely a whisper next to the loud music pouring from the Driftwood Bar and Grille followed by a thud and the faint ding of metal—caught Cade Donovan’s attention. Senses flaring, he listened again, weighing his options. The soft sound repeated itself—a body connecting painfully with a vehicle of some kind. His gut clenched and he turned to his brothers.

"Cade, where are you going?" his older brother Riley asked.

"Just something I want to check out."

"We’ll go with you," his younger brother Christian said, nodding to his twin Riordan.

Cade smiled and shook his head. "Pretty sure I can take care of myself."

It was rare for all of them to be home at the same time, but they’d managed it—everyone meeting at Parris Island for their sister Cheyenne’s graduation from Marine Corps boot camp three days ago. They had another two weeks before they all needed to be back to their respective bases. Earlier in the night, his sisters had gone to the movies, while their parents had gone to a couples-only party.

"Let us know if you need us to come rescue your ass." Riordan laughed.

Cade nodded as his brothers headed into the bar. Aware of his surroundings, he made his way around the side of the building. Knowing the music would cover the sound of his boots on the pavement, he kept to the shadows as he scanned the area. At the far end of the parking lot, four men stood on the other side of a brown 1990 Cadillac Seville, kicking and shouting at an unseen person. He made his way along the side of the building and his heart dropped as his intuition was confirmed. Pulling out his cell phone, he sent a quick message to his brothers.

Cade took a deep breath and hit send. Riley was with the SWAT team in the nearby city of Kalamazoo. Christian and Riordan were both Air Force Combat Controllers. It made sense to let them know and get their help, especially if any of the four men had weapons, but he had no intention of waiting for his brothers to show.

"Is there a problem?" Cade asked, striding over to the group then crossing his arms over his chest as he stopped.

"None of your concern, Marine," said a man with dark hair and the beginnings of a beer belly that his faded University of Michigan T-shirt failed to hide.

"Please help me," the boy on the ground sobbed out. "I didn’t do anything."

The four men looked to be around his age and seemed vaguely familiar but Cade couldn’t place them. They’d called the boy Carlson. As far as he knew, there was only one family of Carlsons-the family of the school bully, Scott Carlson. Scott had been in his class, so that made the guy his younger brother or possibly a cousin.

"Leave him alone." Cade stepped closer. Regardless of his relationship to Scott Carlson, four on one wasn’t remotely fair in these circumstances.

"Nobody asked you," the first man said. "It’s none of your business."

"Yeah, but see-four on one isn’t fair, unless the one is a Marine. What did he do besides breathing that warrants all four of you beating the shit out of him?"

"His brother made our lives hell growing up," a third man replied.

"Pretty sure Scott Carlson made everybody’s life a living hell. That doesn’t mean you take it out on his brother. That could be suicidal," Cade reasoned as the kid tried to pick himself up.

"Doubt it. Saw him using his brother as a punching bag a couple of weeks ago. Makes him fair game," the second man said.

"Bullshit! Why don’t you grow a pair of balls and face Scott himself?" Cade exclaimed. "Stop taking it out on someone smaller than you. That makes you just as bad as Scott."

If you like stories about military men and the partners they choose, if you want to read a story with a few twists and a riddle to solve, and if some very hot and very loving man-on-man-action is your...

Share what you thought about Uniform Desires and earn reward points.