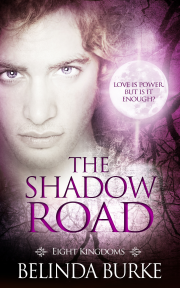 Book 4 in the Eight Kingdoms series

Spring is dead. Summer is divided. Autumn has its darkness…and Winter waits.

In the wake of Dealla’s latest atrocity, Macsen has learned a lesson he will never forget. To love is to fear, and he intends to make sure that his fear never comes to pass. Bran is less than pleased with being left behind while Macsen hunts Dealla, but he has trouble of his own to distract him. An unknown ability is growing in him—magic that has nothing of Summer in it. Disturbed, Bran convinces Macsen to come with him to question his mother. Only she knows who Bran’s father is, and the secret half of his bloodline is the most likely source of his new power.

Elenn agrees to Bran’s request, but for her own reasons. Faelan, one of the gancanagh, is to be Bran’s guide to his father, and she has ordered him to seduce the Red King and prove his love false. Faelan has no desire to follow through, but also no choice. His queen has commanded, and he must obey.

Macsen and Bran aren’t the only lovers whose feelings are being put to the test. After five thousand years of separation, Myrddin has no choice but to accept Kas’ help in restoring the spring and its rite to the mortal world. The difficulty is that he wants Kas to desire him for himself, not out of necessity, and the whole of reality is standing in his way.

Where is the line that divides determination from desire? Love is power—but is it enough?

The Red King’s arrival made the mortal night rich with shadow. It was only a few weeks past Samhain, but there had been no slow descent through autumn to the sleeping season—not this year. This year, the leaves had barely turned when the snow had begun to fall. Now, the Red King stalked the layer of fresh, new whiteness as a blood-tinted wolf who left no prints behind him.

Macsen had gained a name as an omen of death where his own wasn’t known, ran wild across the night and hid from nothing, not even the sunlight. It grew dimmer and grayer as the winter intensified and the snow continued to fall. Despite that, there were humans everywhere, long trains of people moving from one side of the island to the other, seeking a safe place, a haven. There were a thousand lives he could have had as prey at any time, not just mortals but immortals, beings and beasts both in their myriad kinds.

He had only one victim in mind.

Where are you, woman? Dealla, where is it you are hiding?

He named her in his thoughts, named her with the wild howl of the wolf as he climbed from one hill, one mountain, one valley to another. The smell of her was strongest in her palace, a stink of witch-magic that he knew well, but the woman herself wasn’t there. The cold of the scent told Macsen that she hadn’t been there for some time. More than that, there was silence in the whole fortress, an empty silence. There were no guards, no servants, no waiting huntresses in the circles of the walls.

Wherever the woman had gone, she had taken the activity that surrounded her along, and had left no sign of when or if she intended to return.

Snarling, furious, thwarted in his first attempt at vengeance, Macsen left the palace behind and hunted the snow-clad woods around it, followed the frozen rivers. No road, no path, no secret way led him to her, or even to a sign of her, but there were other mortals in his way. Their presence in the wild answered the emptiness that had greeted him in the fortress.

Jaws open, breathless, he moved as a shadow among the falling flakes of snow, gathered the wind and the presences the wind carried behind him. Voices, whispers and laughter followed him. Artless fiends followed him, moved along the path he had marked behind him with terror and death. He hunted—he Hunted. But the prey he sought was denied him, and it was the world of the woman who had done so that paid the price.

Instead, he found one of those who were hers. A huntress, or so she thought herself. A huntress, stalking the silence of the night with a shining weapon, stolen magic that glittered in her hand.

She knew him when she saw him. The awareness was in her face, and Macsen dissected her every expression, every hint of horror, in his first sight of her. She was one of the ones who would run from him, if she could. But she couldn’t, and in the space it took her to draw a breath, Macsen shared this knowledge with her in panting laughter.

The wind echoed him, and the ones who followed him. It seemed for an instant that each star was only a mirror, tossing back that sound, and the sword trembled in her hand. One step at a time, the Red King approached, then drew himself up out of the wolf-shape and into something almost human. He faced the woman, considering.

Was there any purpose to his question?

She is already terrified. Maybe…

He was on her in a moment, one hand holding her wrist and the dangerous weapon she carried far away from him. The other held her chin so tightly that she was already bleeding from the pressure of his fingernails, and he turned her head with an irresistible grip.

Defiant silence answered him, slipped into sobbing as he tightened his hold. He listened to her dispassionately, let her pound at him with the hand he didn’t have pinned, let her kick at him as she pleased. If even terror wasn’t enough, terror and the threat of death, then there was no point to any of this. Huntresses. He’d thought himself done with them, done forever, but now here he was, killing among them without thought for wasted blood or purpose.

Macsen sank his teeth into the throat of the woman he was holding almost carelessly. She screamed, but the snow deadened the sound, and the strength faded from her as he drank away her life.

Drops fell from her throat and stained the snow, Summer raspberry red, and Macsen dropped her and closed his eyes.

He had killed until he was red with blood, dripping with it, until the odor of visceral flesh was his only companion. Unsatisfied even now, he was growing tired of pointless death. He had quenched as much of the thirst inside him as he could, and he missed his lover. Behind his eyelids, he could see Bran smiling, reaching for him. He could almost taste the immortal flavor that had won him over all other things.

Home. Waiting for me… The one left behind in darkness.

The wind rustled at the sound of Macsen’s voice, and his wants crystallized. He counted the days and knew it was time to go back. Despite not having yet found the one he was seeking, he had said a night, no longer. One night in the . The days that Winter night gave him in the mortal world were all but up, and to find that woman… It would take more time.

She isn’t where she belongs. I will have to Hunt her out.

If she had been anyone else, he would have smiled at the thought, but instead of a test of skill it was only a test of his patience. “I hate her. I hate her more than the sun!”

The sun gave me Bran.

He was the Hunter King, but some things were more precious than blood or revenge. Macsen left the body for the shadows, the carrion eaters, the ones who had followed him to pick at the flesh of his kills. He turned away into the snow, and between one step and the next he was the stalking wolf again.

He turned to the east, to the sea and his own country. The storm followed him, and the laughter of the winter wind, and the peering starlight.

This is a wonderfully written book that draws you into a fantasy world where all is not as it seems. These two have loved each other for a very long time and...

This series gets better and better with each new installment. The world was amazing from the very start, but it continues to evolve and the author reveals more and more with each book. I love the s...

Share what you thought about The Shadow Road and earn reward points.

As a writer of romance, I inevitably spend too much time wondering what, exactly, love is. It’s a deceptively simple kind of question – three words, no hard ones…except that in its own way, love may be the most difficult word there is.

Let's start with you telling us a little bit about yourself, Belinda.
About me…hmm. If there was such a thing, I spend far too much time reading – and then writing. I have a minor obsession with paneer, which is a kind of Indian cheese, so delicious.