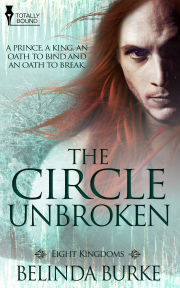 Book 2 in the Eight Kingdoms series

A prince, a king, an oath to bind and an oath to break. Can something begun in darkness survive the light? Or does the shape of that oath define love…and the circle unbroken?

Three months have passed since Macsen Cadoc’s rescue of Bran Fionnan—three mortal months, three days in Macsen’s . Bran is seeking a place for himself as sidhe, as Summer’s Prince and as Macsen’s consort, and the Red King has started to balance the thirst of his own nature with the love that now moves him just as much. Yet when Bran is reminded of an oath that was made between them when he was just a child, that which has so far held them together may end up tearing them apart.

While the strength of their love is tested, a mortal enemy is once more in motion. Focused only on their destruction, Dealla seeks to step into the place of her dead father—to rule over the Milesians and fulfill the oaths of crown and country. To do so, she must find a way to hurt two foes…one new and openly deadly, the other ancient and its enmity long asleep. Allies appear in unlikely places, armed by their own motives to seek the same destruction Dealla desires… But the price of success may be higher than the cost of failure—higher than any plot or plan allows.

What is the price of an oath fulfilled? Is love born from nothing, or does it wear a path that can be traced?

His name came hunting him with laughter on the wind beyond it, and the voice of a mortal girl that scattered across the snows of the Red Kingdom.

In a flash of red hair and crunching footsteps, Bran saw Saoirse Saorla pass before him and farther out into the wilderness.

He left the wood and moved toward the middle of the frosted meadow, the sound of Saoirse’s steps the only thing he could hear besides his own breath. It was over now, he knew it. There was no escape from the ones who hunted him and the girl in such an open space. Blossoms hummed at his feet, and Bran scattered scentless petals as he broke a path through fragile ice flowers to the girl’s side.

“Pick a direction if you want, but I don’t think it will matter.”

She turned her face away from him and peered out across the snow. Bran followed the path of her gaze with his own, sought movement beneath the tall pines they had just left, but there was nothing visible except the girl’s footprints, a clear trail across the wilderness of the Winter landscape.

Though he had run behind her, Bran was pleased to see his own feet had left no imprint on the snow—he was learning fast, faster than the girl, it seemed, but then that shouldn’t have surprised him. He was sidhe, of course things would come more quickly to him—things like how to make the weight of his presence nothing if he wanted it to be. Intent as she was on gaining skills and powers, Saoirse was still a mortal girl.

Macsen had warned them that it would be like this when he’d ordered these lessons, when he had listed powers and promises… Things Bran might possess now, and did not know, and that the girl might never gain. Swiftness and strength, magic and mischief, fire and Summer’s wholeness. Bran had thought his lover was just being hopeful at first. He’d never felt a whisper of such powers, had felt nothing inside him but the gleaming brightness that he could spill into gold, into weapons. But Macsen had been proved right, as he usually was—even if it seemed like their lesson was only a game. A Hunt, which always ended with them as prey.

As this thought passed through his mind, Bran heard a shriek from beside him and turned to see a sudden tussle in the snow, Saoirse panting and red-faced under the playful attack of many beings much smaller than she was. She turned and tried to run again, but there was no getting away this time. Tiny fingers were tangled in the long red threads of Saoirse’s hair, and even as Bran took a step and moved toward her, he felt the chill dampness of two hands, ten fingers icy-cold around his throat.

He saw Saoirse pouting out of the corner of his eye.

“Did you think we wouldn’t? There’s a long way to go before we can compete with hunters like these, Saoirse.”

Flitting figures no longer than Bran’s hand whispered and murmured to each other as they emerged into the open and hovered near him, laughing openly now, no menace in their whispers. Saoirse turned her back to him and to them, but coddling hands reached out and stroked her hair into place again. Don’t be angry, don’t be angry. The words came from all directions and no direction. Saoirse only huffed.

Ffion came forward and settled onto the snow, long bare legs crossed at the ankle, a crust of frost moving outward from her skin.

Bran sat with his legs one over the other, elbows on thighs, his chin in his hands. Saoirse spread her outer cloak on the ice beside him and sat, drawing the edges of the fur up over her feet. When they were settled, Ffion began her questions.

“Tell me, one of you—why is it you do not win against us?”

Bran’s brow furrowed, but he said nothing. Saoirse looked from him to Ffion and scowled.

“I was going to say because you’re sidhe, but since Bran’s sidhe too, that’s not fair. Unless… Unless it’s just because I’m human.”

She said the last word lowest, as if it were a curse not for polite company, a word to be feared.

Bran wanted to comfort her, but he couldn’t deny that her existence had its own troubles. Wasn’t that why these sessions had begun in the first place? To protect her as much as to teach me. But I can’t tell her that. His brow wrinkled and he frowned, trying to come up with an explanation that might soothe her, but Ffion spoke first.

“Saoirse Saorla, listen carefully. I and my kin bested you both because the Hunt is our nature. We are of the Red Court, vassals of the Red King—our essence is his essence.”

“So if you are Hunters… What’s in my nature? What will I do best?”

Bran was interested in that answer too, but Ffion only shrugged.

“I do not know. You are in between, not one thing or another. One day perhaps you will be closer to sidhe than human, unchanged and yet no longer truly mortal. Yet maybe that is not so, and you will always be as you are now.”

“In between? Not one thing or another?”

“Only your own real self.”

Bran saw a darkness on Saoirse’s face as she turned away and tried to catch a snowflake on her tongue. Behind the puckering of her brow was a shadow of pain, and he thought he could guess its source. In her father’s palace, she had suffered for her kindness, had paid in blood to keep the secret of Bran’s trust. Bran had been told by those that had tended her that she would wear the scars of her last night in the human world forever, but what he saw now was more than scars—it was an abuse of her spirit.

“What are you thinking about, Saoirse?”

He asked the question knowing the answer, because she had to say it, bring out into the open.

The girl scowled and her gaze darted in his direction, then turned away again. “My father—that last night.”

Ffion spoke comfortingly. “The King paid them. Paid them for it all—paid them for everything.”

“Not everything. My sister—”

Ffion scolded, but softly. “She is for Bran Fionnan, for our Shining Prince. For his vengeance—vengeance paid is vengeance earned.”

Bran avoided Ffion’s stare, but couldn’t escape from Saoirse’s words, all but contemptuous.

The girl was giving him the most terrible look she could muster, but he pasted a shiftless smile on his face and only shrugged, tried to smile and felt his face contort into something…other.

Share what you thought about The Circle Unbroken PRINT and earn reward points.