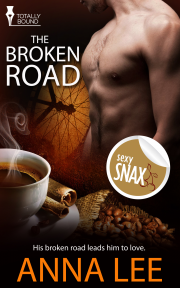 Confined to a wheelchair, Kason Tyler feels invisible, but Ryen Moore wants to show him what real love is all about.

Nearly a year and half ago, Kason Tyler’s life was turned upside down when a drunk driver hit his car. To make matters worse, Kason’s boyfriend Blake walked out on him while he was recovering. Now, confined to a wheelchair and insecure, Kason is afraid he’ll never find someone to see past it. Then he meets Ryen Moore in his coffee shop. Falling head over heels for Ryen is easy. When Blake keeps reappearing like a bad penny and tries to steal their happiness away, Kason puts his trust in Ryen and realizes that his broken road has led him to love.

Publisher's Note: This book was previously released by another publisher. It has been slightly expanded, revised and re-edited for release with Totally Bound Publishing.

Kason knew he was going to have to stop this before he was caught. Going to The Daily Grind every morning for the past week and staying for hours on end had to have been noticed by the staff and the owner, Ryen Moore. Ryen was his problem—or maybe not a problem per se, but his reason for sticking around. He’d met Ryen after coming into the coffee shop on a whim to wait for his sister, Lexie, and had felt an instant attraction to him. Ryen was his type, and perfect, from what he’d learned while sitting there pretending to drink the coffee he normally avoided because it made him jittery.

Handsome and charming, Ryen had coffee-brown eyes and a mop of black hair that flopped adorably over them, causing him to brush it back whenever he was irritated. Today he was wearing a Ralph Lauren polo shirt and faded blue jeans. He was tall and strong, with muscular forearms that made Kason think of how easily Ryen could make him forget all about his problems for a while.

“Good. Need anything?” Ryen often talked to him about everyday things—the weather, the coffee, interests they shared—but nothing too personal, as if he was hesitant or maybe just bothered by Kason practically stalking him here.

Kason could think of a few things he wanted from Ryen. He didn’t have the courage to ask if he would sit and talk over coffee. Besides, Ryen wouldn’t be interested. No one was anymore.

Ryen seemed concerned, but then another customer gestured for him and he had to leave. With a sigh, Kason stared at his laptop. Why was he putting himself through this?

He knew why. He wanted to ask Ryen out, to dinner, a movie or maybe a baseball game. He thought of it often. It was there on the tip of his tongue whenever Ryen spoke to him, yet he couldn’t take the risk. Instead he sat there, laptop in front of him and an empty document, complete with blinking cursor, open. A cup of cold coffee by his left hand.

“I forgot to ask. Refill?” Ryen’s deep voice cut through his thoughts and caused him to jerk his head up.

“Um, no thanks.” Kason paused then gestured to the cup. “To be honest, more than one and I’m bouncing off the walls.”

“So then, it’s not the coffee, huh?” Ryen’s gaze appeared to contain a hint of curiosity and that, combined with his words, left Kason confused.

“You know.” Ryen put his hand on the table and leaned in a little. “You’ve been here every day this week. I know my coffee blends are good, but not that good.”

“I…uh…” Kason tried not to get flustered as he met Ryen’s gaze. That ended up being a mistake. The amusement there and the twinkle in his eyes had him wanting to pull Ryen closer. “I-I’m writing a screenplay, like I told you.”

“Yeah, I remember. But what’s it about?”

“Um, it’s sci-fi. Aliens, time travel, you know, uh, that sort of stuff,” he said lamely, wishing he could get his brain to work and stop him from babbling.

“Interesting.” Ryen flashed him a bright smile, showing off his white teeth. He ducked his head around to peek at the screen. “You appear to be stuck.”

“Yeah, writer’s block.” Kason knew his face was turning a bright red. He would’ve run out if he could.

It was an enjoyable story, and I had fun reading it.  It did a good job of working with the plot so the story didn’t drag on, but also it didn’t feel like we got shortchanged.  The time ju...

I adored both main characters, even if love found its way very fast in the story. Both men were at points in their lives, where one night stands was a thing of the past, and the mutual attraction they...

Share what you thought about The Broken Road and earn reward points.