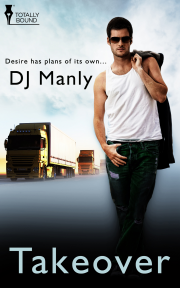 Clive is sent to take over Frost Trucking…Seth intends to protect his grandfather from corporate greed…and desire has plans of its own.

Corporate greed is in abundance in today's economy, and Seth Frost is about to come face to face with it in the person of Clive Roberts.

Clive Roberts comes to Port Credit as a representative of a large trucking corporation—there to take over Frost Trucking, a company on the verge of bankruptcy. Seth Frost had taken time off from his job in the city to visit his grandfather in the hospital. He resents the fact that Roberts is there in Port Credit like a circling piranha, watching his ailing grandfather…just biding his time till he's able to take over a company his grandfather built from scratch.

But there's more to Roberts than meets the eye. In spite of his reason for being there, Seth feels a little off balance when he looks into his eyes. Forced to work together to get the best deal for Seth's grandfather, the attraction between the two men grows. Clive may well be there to take over the trucking company, but can Seth stop Clive from also taking over his heart?

The CEO of Simpson and Associates Inc. stood up in front of the podium and looked out at the members of the business community. Only the elite were present in the huge room at the downtown Hilton Hotel.

The president of the local Chamber of Commerce, as well as managers of several Toronto banking institutions, sat in the front row. They’d all come to applaud Trevor Simpson and Associates for gaining a near monopoly in the transport industry.

Clive Roberts sat at a table next to the VIP crowd. Several terminal managers and their wives sat at the table with him. He was the only one unaccompanied but that was all right. He had no time for romance and all the hassle that came along with it.

Mark had left him a year ago, and he’d done him a favour, really. When he’d lost his job, Clive had been stuck paying the bills for months. As soon as Mark had found another, he had written Clive a cheque for a few hundred dollars and packed his bags. Mark had accused him of being unable to share.

"What do you mean, unable to share?" Clive had protested. "I’ve been footing the bills for months."

"Yeah, and you’ve never let me forget it," Mark had countered. "You could never share your life with anyone. One day, you just may discover that there’s more to life than money."

Okay, so Clive had to admit he had felt a little let down when Mark had left him. He had loved him in his own way. It wasn’t his fault he had a hard time with this sharing business. It was the way he’d grown up. His mother had died when he was six, and his father couldn’t seem to hold a job after that. He drank. Clive had done what he could to make sure his little sister and he had something to eat. As a result, he was a hoarder. He hoarded everything from food to money. And it was never enough. There was always this fear that he’d come up short.

He’d worked his way through college doing any job he could find, and, with a degree in computers and business, had landed the job with Simpson and Associates. Even today, with a big salary and an expense account, Clive felt insecure. At Mark’s insistence, he’d tried counselling. It had worked for a while then he’d gone back to his old self again.

Luckily, Simpson and Associates had soon discovered that Clive had a talent for more than just solving computer problems. He was good at finding cost-saving solutions. Already, he’d saved the company millions of dollars.

Simpson and Associates had been going through a period of restructuring when he’d been hired on. They’d wanted to improve their efficiency, cut the fat, and increase their market share. Clive had offered them some ideas, and they’d told him to run with them.

Within three years, Clive had increased efficiency and made the company more competitive. Mass firings, undercutting the competition, and rerouting the trucks had saved the company a fortune. Turning a profit, amassing money, and swallowing up the smaller trucking companies was the bottom line, and Clive instinctively understood how to do that.

When Trevor Simpson began his presentation, a projection screen appeared behind the silver-haired man. Statistical charts and graphs explained the rationalisation and restructuring the company had undergone. The word ‘profit’ was mentioned often when he talked about undercutting the competition.

Clive noticed that when Simpson said, "We have almost won a total monopoly in the industry," he looked directly at Clive. Clive knew what he meant. Frost Trucking was the 'almost'—Clive’s last mountain to climb. Clive had made it his mission to know everything about Frost. And they should have been easy to break, but, for some reason, they kept hanging on. What stumped Clive about Frost Trucking was that it was no more than a little Mom and Pop outfit with some sentimental hogwash philosophy about putting customers first. Sure, every company spouted stuff like that, but Frost meant it. That philosophy, along with the old man who adhered to it, had put the company in a very vulnerable position.

Frost was the thorn in his side. He was obsessed with it and he vowed that, before this year was through, Frost was going to be his.

D.J. blew me away with his ability to fill his story with an abundance of emotion while presenting situations which challenge the moral integrity of his characters and give them opportunities for growth....

Share what you thought about Takeover and earn reward points.