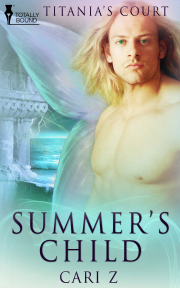 Will the distant but brutal past destroy a changeling's hope for a better life with the Summer Fae?

Dis, a human changeling, is tasked with delivering Oberon's solstice gift to his estranged wife, Titania, at the Summer Court. Leaving behind the land where he barely survived to adulthood is harder than he expected—it means leaving behind his lover Marten as well. Dis hopes that once his task is completed, he and Marten can be together again.

The Summer Fae welcome Dis to their court, but there's more going on behind the scenes than meets the eye. Dis struggles to keep Oberon's gift for Titania safe while being continually tempted by the wilful Summer Fae to disobey, and worse, he loses contact with Marten. Dis is left with no one he can trust, and is faced with the impossible choice between disobedience to Oberon, who will surely kill him once he finds out, or losing the man that he loves forever.

Summer's Child If it hadn’t been for his hound Ciurlen, Dis would have become hopelessly lost in the Ways between the realms of the Winter and the Summer Fae. What had started as a straightforward path of white stone leading away from the Unseelie kingdom’s gate soon became mired in confusion as the path divided over a dozen times. The flat, grey landscape changed as well, rising and falling and spilling its odd, formless nothingness over the path. Ciurlen carefully avoided touching it and Dis followed his lead, figuring that whatever the substance that formed the Ways was made of, it wasn’t something he was interested in handling. He could probably survive touching it. Dis, the sole changeling to survive to adulthood in the court of the Winter Fae, was now the bearer of Oberon’s Solstice gift to his estranged wife, Titania. It was a gift of power, driven into Dis’ body through sex and held there by magic, and it tested its bounds at every turn. The power was warm and seductive, and teased Dis with the ease of its presence. He had but to reach for it and it would be his for the taking, strengthening him, making him faster and smarter and better. With it he could be more powerful than any of the lesser fae, more powerful than anyone save Oberon or Titania. He could punish Sable, his cruel mistress, for the years and years of abuse he had endured at her carelessly malicious hands. He could bind his lover Marten, Sable’s brother, to him even more tightly than they were already bound, so that the fae lord could never leave him. He could do almost anything. Which was why it was so important that he do nothing. Dis had learnt from a very young age never to forget his place, and he knew better than to grasp for something that was so wholly beyond his comprehension. He was determined that the gift would go to Titania like it was meant to, whole and unspoiled by Dis’ clumsy handling. That didn’t mean he wasn’t tempted, though. When the path before him was destroyed for farther than he could jump, Dis stared at his hound in consternation. He didn’t even have to look down—Ciurlen was as tall as he was, a massive, shaggy white creature whose eyes were obscured by his overhanging hair. It didn’t seem to bother the hound, though, who relied far more on the strength of his nose than the sharpness of his vision. "How are we to get around it?" Dis asked. The power nudged him, but Dis ignored it. Ciurlen bent his nose to the trail and sniffed, then growled. He turned and trotted back down the way they’d just came, and Dis followed after a moment’s deliberation. Oberon had promised him that his hound would see him safely through the Ways, and Dis believed him, if for no other reason than Oberon desperately wanted to reconcile with his wife and thought that Dis stood a better chance of convincing Titania to accept his gift than one of his vicious Unseelie followers did. There was a new fork in the path, one that hadn’t been there five minutes ago. Ciurlen sniffed, whined for a moment, sniffed again, then reluctantly headed down the new branch. It was narrower than the others, and there were places where Dis had to very carefully watch his feet to avoid stepping off, but they managed. After another hour of walking, the grey ahead of them began to lighten at the very base of the horizon, limned with the faintest golden line, and Dis moved towards it eagerly. After they had stepped through the gate to the Ways, the Winter kingdom had appeared the same way, like a golden mist that had diminished the farther away from it they travelled. Dis wasn’t even sure how long they had been in the Ways at this point—time seemed insubstantial, and he felt no hunger or thirst no matter how long he walked—but he figured the light was a good sign. Ciurlen stopped abruptly, and his lips lifted as he growled. He crouched slightly, as though he were about to leap. Dis looked around but didn’t see anything to merit the sudden change in his hound’s demeanour. "What is it?" Dis stepped a little closer and looked down, then took an instinctive step back. Tendrils of liquid blackness were seeping into the edges of the path. They looked like vines at first, dozens of tiny reaching shoots, until there were enough of them to join together. Then they began to form what looked like...claws. Dis pulled Oberon’s cloak tighter around his shoulders and touched the gold and onyx ring he wore on his left hand for reassurance. This...this probably wasn’t good. Ciurlen somehow got behind him and nudged him with his head, hard enough to send Dis stumbling forward. He avoided the crawling blackness and moved beyond it, but to his dismay it didn’t stop there. The blackness kept spreading, creeping into itself from both sides of the path and rising up in the centre like a jagged wave. Creatures began to form within it, and by then Dis had seen enough. He turned towards the faint golden line in the distance and began to run. Ciurlen stayed with him, turning and barking at times but mostly snapping at Dis’ heels, keeping him running as fast as he could.
Buy Now

Share what you thought about Summer's Child and earn reward points.