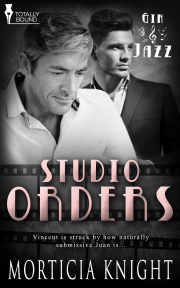 Book 1 in the Gin & Jazz series

The head of Global Pictures Studios, Vincent Franklin, promised Jack Stone that he would take care of Jack’s loyal driver, Juan. But for a dominant man like Vincent, Juan’s natural submissiveness causes him to long for much more from the shy young man.

Juan is devastated when his only friend, film star Jack Stone, leaves Hollywood for good. Lonely most of his life, the shy young man has dreamt of love, only to have his heart broken repeatedly. Before he left, Jack made certain that Juan would be taken care of by asking his ex-boss, studio chief Vincent Franklin, to hire him on.

Vincent Franklin is an incredibly controlled and meticulous man. Not given to emotional outbursts and unnecessary flights of fancy, his temperament is ideal for the stressful and demanding job as head of Global Pictures Studio. He leads a carefully concealed private life, his only social outlet being the sadomasochism club to which he belongs. When Jack introduces him to his handsome chauffeur Juan, he is struck by how naturally submissive Juan is. He wonders…

Soon, Juan is falling for the elegant, older man that is his new boss. He’s also thrilled when Vincent asks him to be his personal valet. But there are things that Vincent demands of a lover that Juan knows nothing about. Things that could make him run away from the man who would do anything to protect and care for him.

“Mr Franklin, Mr Pasquale is insisting. He seems rather…desperate and claims he’ll come over here and not leave until you speak with him.”

Vincent regarded Miss Platt, his secretary and receptionist at Global Pictures Studios. The worry etched on her brow and the flush in her cheeks indicated how rattled the typically stoic young woman was by Roman’s likely hysterical manner. Vincent had chosen Susan Platt as his secretary precisely because her demeanour was as controlled and unflappable as his own. But screen idol Roman Pasquale was a challenge on his best days. And the past several days had not been his best. They had probably been among his lowest.

Miss Platt looked as distressed as he’d ever seen her which—in addition to her facial expression—amounted to her rubbing her thumb reflexively on the door jamb.

I wonder if anyone has ever tried to dominate her?

Vincent cleared his throat and mentally kicked himself. He had stayed away from the club for too long. However, his prospects there had been rather dismal as of late.

“He said he’s nearby and could be here in ten minutes.”

It was the very grill that all of them from the studio regularly haunted and where Roman had met his now ex-lover, Jack Stone. It was there that Global Studio chief Vincent and his associates, director Marvin Holst and casting agent Herbert Goldstein had been meeting with the beautiful young actor about signing a film contract with the studio the previous year. His angelic good looks had already captured audiences in a small movie role he had been in with his close friend, Trixie Fox. Nineteen twenty-four had been a great year for discovering new talent. But now that it was the spring of twenty-five, Vincent was on the verge of losing some of his best players.

So much has changed since then.

Roman had shown up unexpectedly at the luncheon and after joining them, had spent the majority of the meal fucking Jack with his stare. Vincent still regretted that he hadn’t stepped in somehow to save Jack from Roman’s clutches. At the time, Vincent hadn’t been able to fathom how the young man could truly have such a sweet disposition and be so innocent in spirit—especially anyone who had been in for more than five minutes.

Miss Platt knew that Vincent demanded a certain level of respect and behaviour from her, as he did with anyone he associated with. She had to be quite flustered by Roman to push him to answer her.

“Fine then. Might as well get this over with. Tell him he has ten minutes to get here, otherwise I’m leaving for the day.”

His secretary looked relieved as if she had just exhaled with her entire body.

“Thank you, sir. Thank you very much.”

She left the room, carefully shutting the door behind her so that it didn’t make a loud noise. Vincent realised it had been a rough couple of weeks for her and that she had handled it admirably, the way she did most challenges that arose from working at one of the top motion picture companies in the world. From the moment Jack had broken free from Roman for good, the devastated film star had been voracious in his attempts to get to Jack through the studio. Susan had been the one to deal with the brunt of Roman’s angry and frantic efforts to find his ex-lover.  The young man had been very careful to keep his whereabouts hidden when off the lot—no doubt with his driver and fellow escapee, Juan, helping him in that regard.

Vincent made a note in his calendar to order some roses and theatre tickets to be sent to Miss Platt at the office.

What I need is a valet.

He didn’t dare. There wasn’t a chance he would trust anyone in his home. Vincent’s life outside of the studio was a carefully constructed secret. There was a housekeeper who came in a few days a week and only when he was there. He never allowed anyone access to his private residence unless they had been expressly invited. His driver Tommy arrived in the morning from wherever it was that he resided and tended to Vincent’s transportation needs. He was on call for premieres, meetings and other engagements—but never to the club.

It had been almost a month since the last time he had partaken of his home away from home. If ever Vincent had needed the dynamic of dominating another man, revelling in the joy of his submission as they surrendered to his masterful touch—the past couple of weeks had been it. Yet, he hadn’t bothered going. No one there had the potential to connect with him on a long term or—what he barely allowed himself to hope for any longer—a permanent basis.

Ten years before, he had loved a man deeply who had seemed to be the perfect counterpart for him. But his young lover had only been experimenting. He had lied to Vincent about his circumstances, eventually returning to his hometown back east to marry his fiancé.

Sighing, Vincent prepared himself for the raging storm in the person of Roman Pasquale that would soon come thundering through his office. Practically on cue, Miss Platt buzzed him on the intercom.

There was no point in questioning what she wanted. “Send him in.”

Share what you thought about Studio Orders PRINT and earn reward points.