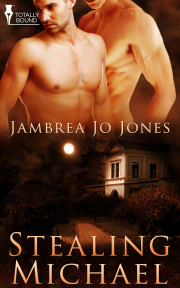 Can one wrong make it right?

Robert's mother pushes him into stealing a painting. He is in over his head when the homeowner catches him in the act. It leaves him wondering what to do now?

Michael's life turns in a new direction when a stranger enters his home and the urge to protect the thief overcomes his common sense. He knows he should be angry but who can resist a thief that looks like an angel?

Robert Mitchell scurried across the leaves littering the cold fall ground behind Thomas Eli’s house. The moon hung bright in the sky making it hard for the pale man to hide. He made himself as small as possible and scooped up some dirt, using it to darken his complexion.

It wouldn’t do for me to be seen.

His objective was to sneak into the author’s house and steal a painting. His mom had seen a spread in a magazine and said the painting was worth a fortune, that it would keep her in her medicine for months.

Robert shivered in the cold. He’d left his coat at home, it wasn’t on Mom’s list of things to carry. A sound reached his ears and he perked up, tilting his head to the side.

Shit, he isn’t supposed to be home. What should I do?

Robert held his breath and concentrated on the sound of shoes clicking on the cement walk. He let the air trapped in his lungs seep out like a tire deflated with a knife.

Thomas’ footsteps sounded closer—it had to be Thomas—and then they passed. Robert waited a few minutes before leaving his hiding place. He slithered across the yard until he reached the stairs at Thomas’ front door. He stayed close to the ground on the way up. He couldn’t give himself away. Maybe he should wait to see if the author would leave the house again. It was a bad idea to go in with Thomas home. His Mom had given him some chloroform she’d swiped, from where he had no idea. Robert knew it was best not to ask questions.

He paused as light flared to life inside, but the door stayed closed. Continuing to the entrance, he patted the bulge in his front pocket for reassurance. The chemical would help him knock Thomas out so he could take the painting. Hopefully the guy wouldn’t linger in the front room; the drug was a last ditch effort. He pulled the zip-locked bag from his pocket and opened it, preparing himself for the worst case scenario.

The door beckoned him, the handle mocking him.

He shook his head.

If you like a story with a bit of tension and some interesting character motivations, then you will like 'Stealing Michal' as much as I did.

Share what you thought about Stealing Michael and earn reward points.