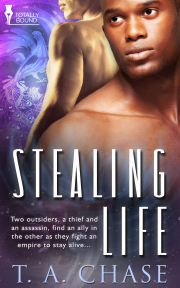 Two outsiders, a thief and an assassin, find an ally in the other as they fight an empire to stay alive.

Rue Thaday accepts a job to steal some files for the Inter-Universal Military. When he comes face-to-face with his mark, Rue realizes there's more going on than meets the eye. He might even have been set up to take the fall while the IUM forces another planet to accept their rule.

Vlatko's trying to find a way to survive. When Rue arrives in his life, Vlatko knows the thief has ulterior motives, but he's willing to risk everything for a taste of Rue's lips.

Together, they have to find a way to keep Vlatko alive, and not allow the IUM to win the very dangerous power play they're caught up in. That might be the easy part, considering all the trouble appearing from Rue's unknown past, along with the assassins who want to kill Vlatko.

Reader Advisory: This book was previously released at another publisher. It has been revised and re-edited for release by Total-E-Bound.

Hanging by his arms from a tree waiting for darkness to fall gave Rue a lot of time to contemplate his life. He’d made tons of mistakes in the twenty some years he’d lived, but his biggest had to be catching a ride on the cargo ship. Still, it had been the only option left to him. He’d really needed to leave Way Station Nine before security caught him.

Unfortunately, he was now naked. He rested his forehead against the rough bark and prayed there weren’t any ants or insects living in the wood. Insects and his naked body didn’t mix. Damn those guys. He’d never expected them to abandon him in the clearing, hiding his clothes and leaving his bare ass tied to a tree waiting for some fucking huge animal to come and eat him alive—they’d been graphic about what would happen to him. He’d thought they were just going to drop him in the clearing, and he would make up some explanation as how he came to be there when he was found. He should’ve known better.

So maybe his biggest mistake hadn’t been the cargo ship. It might have been making lewd advances towards the captain. Bad luck for him. The captain was a Castan from the planet Casta, one of those places where gay love was frowned upon to the extent that two men caught touching in any way could be killed. Lucky for Rue, the captain didn’t feel like killing him. The captain was into torture, Rue guessed, because waiting until the big animals arrived was driving him insane.

The undergrowth rustled and Rue hugged the tree tighter. Someone had once said only the smart die young, so he’d figured he was destined to live forever. Yet somehow, there’d been a miscommunication with his gods and they’d abandoned him to his gruesome death. A totally unrelated thought popped into his head—the ugly birthmark on his back was really beginning to itch. He wished there was some way he could scratch it, but his arms were fastened to the tree with ropes, and had gone numb, so he couldn’t move.

Whatever was in the bushes moved closer. Rue shut his eyes and started praying. "Gods, if you’re out there, please save me. I promise, no more stealing or whoring. No more taking advantage of blind beggars and cripples. I’ll go to Temple every Holy day."

He was babbling, but hell, the gods should be used to people ignoring them until the person praying needed saving. He thumped his forehead against the tree. Maybe praying now wasn’t a good idea. The gods had no reason to help him out. He wasn’t exactly a shining example of a good person. He tried to shrug. What did the gods expect? His mother had abandoned him on the streets when he was five. He’d survived any way possible. Maybe it wasn’t following the golden road to the Heavens, but he didn’t go hungry too often.

The sound of grass and twigs crunching underfoot caught his attention as the creature stalking him stepped into the clearing. This was it. He was going to be ripped to shreds without anyone anywhere mourning his passing. Warm breath brushed over his neck and he bent his head forward, offering his naked neck and hoping for a quick death. The scent filling his nose wasn’t that of an animal. It was a strange combination of musk and orange. A finger or claw—he didn’t know which—traced the outline of his birthmark.

A crazy urge came over him to beg his soon-to-be killer to scratch his back. He laughed wildly. The things you think about when you’re about to die. His own breath caught in his chest as the creature moved to stand where Rue could see it, if his eyes were open.

The order came as such a shock that Rue’s eyes popped open without a thought from him. Rue was happy he was tied to the tree because he would have fallen over in shock at the sight greeting him.

Vlatko stared at the strange man tied spread-eagled to the oak. He hadn’t believed the children when they’d come running into his hut, yelling about the ships and the men. He’d hoped it had been their active imaginations making things up, but he had gone out to investigate anyway.

Amazement had swamped him when he’d stepped into the clearing and seen the man. As Vlatko had walked closer, the man had started praying to his gods. Vlatko knew it was futile to pray to any gods. They were on their own in the universe. That was why he’d chosen to get lost on a small planet as close to the edge of nowhere as he could get.

He traced the red mark on the man’s back. He knew it was just a birthmark, but the simple people of this planet were going to freak when they saw it. A stranger with a birthmark in the shape of a firebird tied to their sacred tree would push these people into a frenzy if they found out about it.

The naked man bent his head forward, offering up his body as a sacrifice. Vlatko couldn’t help himself. He leaned in and breathed the man’s scent. The acidic tang of fear was there, but buried beneath was the arousing smell of man. It had been a long time since he’d let his body react to the male scent. However, there was no one with him in the clearing, so he loosened his control.

His cock swelled and his balls tightened. Lust flowed through him. His breathing came quicker. He fought the urge to lick the exposed neck and taste the helpless man before him. The man laughed and Vlatko could hear the fear in the man’s voice. Now wasn’t the time to indulge his urges.

He circled around to look at the man’s face. The stranger had his eyes scrunched shut. Probably didn’t want to see his killer, Vlatko thought. He didn’t really blame the man. Not everyone was brave enough to face his or her own death.

The stranger’s eyes popped open and Vlatko had to muffle his gasp. The man had firebird eyes— strange amber, with gold sparks and orange flames burning in them. Vlatko blinked. The eyes staring back at him were still amber, but there were no longer any orange flames.

Share what you thought about Stealing Life and earn reward points.

Why is it important to live life to the fullest?

It’s so important to never turn your back on adventure and life because you never know when it might end. No one knows the exact date and time of our death. I don’t want to get there, look back on my life, and be saddened by all the things I could’ve done, but was too afraid to do…